The GameDay live chat kicks off at 10:30am eastern on Sunday and runs for a full hour. We’ll be talking Starts & Sits like always, but feel free to share with the group any of your predictions for Week 9. Winners only, please.

PHILADELPHIA EAGLES (+3) at New Orleans Saints: Philadelphia’s biggest problems this season have all started and ended on the offensive side of the football. So now that the Birds have a date with the league’s most atrocious defensive unit, Michael Vick and co. should finally be able to generate some offense, right?

Last week’s 2-3 effort has sadly become the norm, rather than the exception. At some point we have to be due for a breakout performance. I’m guessing October of 2014 is when that will happen.

Today marks the official end of our survivor recommendations. After losing with the Tennessee Titans last Sunday, we’ve now biffed in two of eight weeks. There’s always next year!

I’ve got a team loaded with Philadelphia Eagles set for the challenge this week, so adjust your game plans accordingly. It’s $2 to enter and Fanduel has put up a $1,000 prize pool, so why not turn your football knowledge into some cold, hard cash?

Cam Newton, QB, Carolina Panthers (at Redskins): Through eight weeks, Newton ranks just 13th in fantasy scoring at the quarterback position. But owners who have stayed patient with the sophomore signal-caller should be rewarded in a big way on Sunday when the Panthers travel to Washington to take on a Redskins team that currently ranks dead last in the NFL in pass defense (314.2 yds/gm) while surrendering an average of 24.1 fantasy points per game to opposing quarterbacks (third-most in NFL). If you’re still interested in trading Newton, you should be able to get a nice return following this performance.

Reggie Bush, RB, Miami Dolphins (at Colts): Bush has found the end zone only one time since Week 2 while failing to top 70 rushing yards in a game in five consecutive starts. So if he can’t get it done this weekend, the former New Orleans Saint may be headed for a permanent spot on your bench for the remainder of the season. Miami travels to Indianapolis on Sunday to take on a Colts team that ranks 27th in the NFL in run defense (137.4 yds/gm) and is surrendering an average of 21.7 fantasy points per game to opposing ball-carriers in 2012 (seventh-most in NFL). Even Shonn Greene put up a monster performance against these guys. 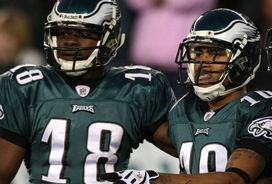 Maclin and Jackson should slice and dice the New Orleans secondary.

Jeremy Maclin, WR, Philadelphia Eagles (at Saints): If there was ever a week for the Philadelphia offense to get back on track, this is it. New Orleans has been pitiful on the defensive side of the football this season, ranking 30th against the pass (304.6 yds/gm) and in scoring (30.9 pts/gm) while giving up more fantasy points to opposing wide receivers than any other team in the league (32.9 pts/gm). We also advise you to start DeSean Jackson this weekend as well.

Mikel Leshoure, RB, Detroit Lions (at Jaguars): Since rushing for 100 yards and a score in his NFL debut against the Titans back on September 23, Leshoure has rushed for just 205 yards with no touchdowns over his last four starts. However, we’re willing to roll the dice one last time on Sunday because this matchup is too good to pass up. Jacksonville currently ranks 25th in the NFL in run defense (135.7 yds/gm) and is giving up an average of 23.5 fantasy points per game to opposing running backs this season (fourth-most in NFL). If Leshoure can’t get it done here, then he’s headed to our bench for an extended stay.

Denarius Moore, WR, Oakland Raiders (vs. Buccaneers): Moore has found the end zone in each of his last three starts and looks to be in line for another solid performance this weekend. Tampa Bay has been playing some decent football as of late, but the Buccaneers still rank a dreadful 31st in the NFL against the pass (309.6 yds/gm) while surrendering an average of 28.6 fantasy points per game to opposing wide receivers this season (third-most in NFL). Vegas has this total lined at 46.5 at the moment, so we should see some scoring in this one.

Jermaine Gresham, TE, Cincinnati Bengals (vs. Broncos): Gresham hasn’t done anything to wow fantasy owners through the first half of the season, but if you’re jammed up at the TE position this Sunday, the former Oklahoma standout could make for a decent replacement. Cincinnati is coming off the bye and the Broncos are giving up an average of 10.9 fantasy points per game to opposing tight ends this season (third-most in NFL), so there’s some opportunity here.

Green Bay Packers, D/ST (vs. Cardinals): After suffering a public beating on Monday night against the San Francisco 49ers, Arizona takes the NFL’s 31st ranked offense to Green Bay on short rest for a showdown with the Packers. Take note that only the Kansas City Chiefs are giving up more fantasy points to opposing D/STs this season than the Cardinals (13.5 pts/gm, second-most in NFL).

Matt Hasselbeck, QB, Tennessee Titans (vs. Bears): Hasselbeck has been a semi-popular bye week replacement option at the quarterback position as of late, but take note that he’s thrown only one touchdown pass in each of his last four starts. Combine those mid-level performances with the fact that the Chicago Bears rank second in the league in scoring defense (14.3 pts/gm) and are surrendering an average of just 14.2 fantasy points per game to opposing quarterbacks this season (second-fewest in NFL) and you’re better served looking for another Week 9 substitute to get you through the weekend.

C.J. Spiller & Fred Jackson, RBs, Buffalo Bills (at Texans): They’re still cutting into each other’s workload and have a road date with the league’s third-ranked run defense on Sunday in the form of the Houston Texans (83.0 yds/gm). This is one of the more dynamic 1-2 running back punches in the league, but keep in mind that Wade Phillips’ defense is surrendering an average of only 11.3 fantasy points per game to opposing running backs this season (third-fewest in NFL). Neither guy is a terrible option for Week 9, but we wouldn’t expect big stat lines from either.

ICONBryant has been kept out of the end zone in every game but one this season.

Dez Bryant, WR, Dallas Cowboys (at Falcons): Bryant topped the 100-yard mark last Sunday for the second time in his last four starts, but keep in mind that the third-year receiver has been kept out of the end zone in six of seven games this season. Believe it or not, the Falcons have actually been more impressive on the road then they have at home in 2012, but this is a team that still ranks tenth in the NFL against the pass (216.9 yds/gm) and is surrendering an average of just 18.4 fantasy points per game to opposing wide receivers this season (sixth-fewest in NFL), so we’re going to take a pass on Byrant.

Ahmad Bradshaw, RB, New York Giants (vs. Steelers): One of the 2012 season’s more productive running backs to date, we completely understand if you plan on ignoring the following stats. After all, Bradshaw currently ranks 15th in fantasy scoring at the RB position. Just take note that through eight weeks, the Steelers rank ninth in the NFL in run defense (91.6 yds/gm) and are giving up an average of only 13.4 fantasy points per game to opposing running backs this season (fifth-fewest in NFL). With limited options due to bye weeks, Bradshaw isn’t a terrible start for Week 9, but he’s got a relatively low ceiling.

Kenny Britt, WR, Tennessee Titans (vs. Bears): Britt has recorded only one touchdown so far this season and is averaging just 34.8 receiving yards per game through six starts. Does that sound like a guy you want to start against the league’s second-ranked scoring defense (14.3 pts/gm)? We thought not.

Brandon Pettigrew, TE, Detroit Lions (at Jaguars): Pettigrew hasn’t found the end zone since Week 2 and while a matchup with the Jaguars may look good on its face, keep in mind that Jacksonville is surrendering an average of just 4.5 fantasy points per game to opposing tight ends this season (second-fewest in NFL). There are better options out there.

Pittsburgh Steelers, D/ST (at NY Giants): Big Blue currently ranks fourth in the NFL in total offense (396.8 yds/gm), third in scoring (29.2 pts/gm) and is giving up an average of only 5.2 fantasy points per game to opposing D/STs this season (t-second-fewest in NFL). Vegas has this total lined at 47.5 points at the current moment, so don’t be surprised if this game turns into a shootout.