Last week: Won with both New England and Cincinnati

Why: A 13-point favorite playing host to a rookie quarterback and a defense that ranks dead last in the NFL in both yardage (466.0 yds/gm) and scoring (39.7 pts/gm) seems like the optimum play now, doesn’t it?

This week: San Francisco (-5) over Philadelphia

Analysis: Did you see what happened on Thursday night when the Redskins—fresh off that grueling Week 3 slugfest with the Philadelphia Eagles—tried to complete a quick turnaround for the franchise’s Week 4 matchup with the Giants? Those who watched last Sunday’s game between Philly and Washington know damn well what I’m talking about. That game took its toll on both squads and I fully expect the Eagles to be feeling the effects Sunday in San Francisco against a hungry Niners team that is coming off back-to-back losses. Per Sportsbook Review.com, this game opened with San Francisco as a 3.5-point favorite before early action forced a move all the way up to -5. And let’s not forget that Philadelphia is missing almost every single starter from their offensive line for this one.

As has become the norm, the Big Puma and I are still in the process of finalizing our card for this week’s slate of action. Here’s what we are currently considering:

Tony Romo, QB, Dallas Cowboys (vs. New Orleans): The Dallas offense has leaned heavily on the running game through the first three weeks of the season (fifth in NFL in rushing attempts, third in rushing yards), but if the team’s defense falls to pieces Sunday against the New Orleans Saints, Romo will have no choice but to air it out against a secondary that is surrendering an average of 21.2 fantasy points per game to opposing quarterbacks this season (8th-most in NFL). Don’t be fooled by how the Saints performed against Teddy Bridgewater last week, because this is still the same unit that gave up 448 passing yards to Matt Ryan in Week 1 and couldn’t stop Brian Hoyer during the fourth quarter in Week 2.

Donald Brown, RB, San Diego Chargers (vs. Jacksonville): The perfect storm collides in Southern California on Sunday as the Bolts are so depleted at the running back position (Mathews and Woodhead both OUT) that Brown is the only guy left to handle the workload. In addition to a plethora of carries, the former Colt will be running against a porous Jacksonville defense that is giving up more fantasy points per game to opposing running backs this season than any other team in the league (30.4 pts/gm). Brown isn’t just a value play in Week 4, he’s an outright RB1.

Crabtree has one of the tastiest matchups on the board in Week 4.

Michael Crabtree, WR, San Francisco 49ers (vs. Philadelphia): Has found the end zone in each of his last two outings and is averaging a healthy 8.0 targets per game this season, which should lead to favorable results Sunday against the overrated cornerback tandem of Cary Williams and Bradley Fletcher. The Eagles are flying cross-country after a brutal encounter with the Redskins in Week 3 and are surrendering an average of 28.2 fantasy points per game to opposing wide receivers this season (third-most in NFL). The Niners are desperate for a win and quarterback Colin Kaepernick needs to get his motor running hot. The best way to do that is by targeting Crabtree early and often.

Matt Asiata, RB, Minnesota Vikings (vs. Atlanta): The last time we saw the Falcons, Matt Ryan and company were laying an ass-kicking on the Tampa Bay Buccaneers. But as we’ve said time and time again, the Falcons are a much different team when playing in the Georgia Dome vs. playing outdoors on the road. Look for the Vikings to feature a heavy dose of Asiata in an effort to ease rookie quarterback Teddy Bridgewater into the game. Assuming Minnesota can keep it relatively close, Asiata should see plenty of touches against a defense that is giving up an average of 27.7 fantasy points per game to opposing running backs this season (third-most in NFL).

Keenan Allen, WR, San Diego Chargers (vs. Jacksonville): There’s a reason Allen was one of our top buy-low prospects entering Week 4 and it begins with an extremely favorable showdown with a Jaguars defense that is permitting an average of 24.0 fantasy points per game to opposing wide receivers this year (ninth-most in NFL). After three underwhelming performances that have forced some owners to jump ship, those who have remained patient will be pleasantly rewarded on Sunday afternoon.

Delanie Walker, TE, Tennessee Titans (at Indianapolis): Not the best of Week 4 options considering the injury to quarterback Jake Locker, but the tight end position as a whole has been hit by the injury bug and Walker is one of the few healthy players with a favorable matchup this weekend. The Colts are currently giving up an average of 12.6 fantasy points per game to opposing tight ends this season (fifth-most in NFL) and the Titans will likely need to put the ball in the air early and often this Sunday in an effort to keep pace with Andrew Luck. Note that Walker has already found the end zone twice this season and is averaging a healthy 8.3 targets per game.

Pittsburgh Steelers, D/ST (vs. Tampa Bay): Injuries to linebackers Jarvis Jones and Ryan Shazier are cause for concern, but the Buccaneers have been atrocious offensively this season, recording averages of just 15.0 points (29th in NFL) and 271.0 total yards (30th) per game in 2014. As if those statistics weren’t appealing enough, Tampa Bay also happens to lead the league in turnovers (9) this year. Yeah, it’s been a real rocky start for Lovie Smith in Florida.

Cam Newton, QB, Carolina Panthers (at Baltimore): The Panthers didn’t run a single zone-read play in Week 3 against the Steelers, suggesting the team may be trying to protect Newton from further aggravating his preseason rib injury. That’s a bad sign for fantasy owners because if the Carolina signal-caller doesn’t plan on picking up any points with his feet, his overall value takes a significant hit. Additionally, the Ravens are surrendering an average of just 16.0 fantasy points per game to opposing quarterbacks this season (sixth-fewest in NFL), so owners are better off looking for a more favorable matchup in Week 4.

Joique Bell, RB, Detroit Lions (at NY Jets): Bell is battling a minor knee injury and runs into a New York Jets team this weekend that currently ranks first in the league in run defense (55.0 yds/gm) while surrendering fewer fantasy points per game to opposing running backs than any other team in the business (6.7). Reggie Bush is a decent play in our opinion because of his ability to create plays in the passing game, but we’d take a pass on Bell. 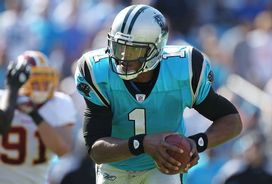 Newton's rib injury is killing his ability to pick up fantasy points via the ground game.

Reggie Wayne, WR, Indianapolis Colts (vs. Tennessee): Has yet to find the end zone and has posted a grand total of just 90 receiving yards over his last two outings. Wayne isn’t a terrible Week 4 option, but take note that the Titans are permitting an average of just 17.0 fantasy points per game to opposing wide receivers this weekend (fifth-fewest in NFL). If the Colts get up early in this one, the team may be content to grind out the clock with Trent Richardson and Ahmad Bradshaw.

Chris Ivory & Chris Johnson, RBs, New York Jets (vs. Detroit): They continue to steal carries from one another and face a stout Detroit front four on Sunday that ranks second in the league in run defense (63.7 yds/gm) while giving up an average of only 12.9 fantasy points per game to opposing running backs (seventh-fewest in NFL) this season. Ivory isn’t a terrible play, but we would definitely pass on the artist formerly known as CJ2K.

Torrey Smith, WR, Baltimore Ravens (vs. Carolina): Torrey Smith was the early fantasy target on draft day, but Steve Smith is the Baltimore receiver who is tearing it up this season. As for Torrey, the four-year veteran has caught just six passes for 85 yards through three games on a paltry 18 targets. Stay away once again in Week 4 as the Carolina defense is surrendering an average of just 18.7 fantasy points per game to opposing wide receivers this season (ninth-fewest in NFL). But owners are still advised to start Steve Smith with confidence.

Jason Witten, TE, Dallas Cowboys (vs. New Orleans): In the twilight of his career, Witten’s 2014 fantasy campaign is off to an inauspicious start with a three-game stat line featuring just ten receptions for 95 yards and zero touchdowns. For as bad as the New Orleans defense has been this season, the Saints are permitting an average of just 5.1 fantasy points per game to opposing tight ends in 2014 (sixth-fewest in NFL), meaning you’d be better served finding a more favorable matchup, if one actually exists.

San Francisco 49ers, D/ST (vs. Philadelphia): The Eagles are banged up and traveling across the country for this one, but we still think Chip Kelly and Nick Foles will find a way to put up some impressive numbers against a defense that is giving up more fantasy points per game to opposing wide receivers than any other unit in the business (30.4 pts/gm). Take note that Vegas has the total for this game listed at 50.5 for a reason.