I’ll be hosting a rapid-fire fantasy live chat Sunday morning from 10:30am to 11:30am eastern. The usual topics up for debate include Starts & Sits, injury updates, weather reports and our locks/predictions.

We threw the Lions, Ravens, Chargers and Seahawks up against the wall last week and watched all four hold on for victories in Week 14. I guess Survivor Pools really are that easy. Then again, I was the schmuck who took the Cleveland Browns over Cincinnati in Week 1 and was eliminated from contention approximately 200 minutes after the season started.

That’s what happens when you try to get fancy.

As for Week 15, the Cardinals are a solid play at home against the Browns, the Bengals should cruise in St. Louis and we expect the Cowboys to bounce back at Tampa Bay.

CINCINNATI BENGALS (-6.5) at St. Louis Rams: October 30, 2011. That marks the last time the St. Louis Rams scored more than 20 points in a game. The Rams rank dead last in the NFL in scoring (11.8 pts/gm) and are 2-10 against the spread in their last 12 games as an underdog. Meanwhile, the Bengals are fighting for a spot in the postseason and are 6-1-1 ATS in their last eight road games.

Rex Grossman, QB, Washington Redskins (at New York Giants): For as much fear as the thought of starting Grossman sends down your spine, be advised that the former Chicago signal-caller has tossed two touchdown passes in three of his last four starts and is averaging 269.8 passing yards per game over his last four outings. Those are solid numbers, especially when you take into account the fact that Grossman has a Week 15 date with a Giants defense that currently ranks 29th in the NFL against the pass (263.7 yds/gm) and is surrendering an average of 22.5 fantasy points per game to opposing quarterbacks (3rd-most in NFL). 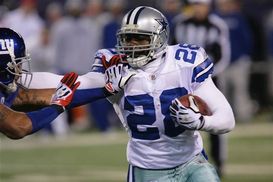 Felix Jones, RB, Dallas Cowboys (at Tampa Bay): With rookie sensation DeMarco Murray out for the season with an ankle injury, Jones steps back into the starting rotation as the featured ball carrier in Big D. The former Arkansas product amassed 137 total yards on 22 touches last Sunday night against the G-Men and we predict another solid outing Saturday evening against a Tampa Bay defense that has been abysmal in 2011. No team in the NFL is surrendering more fantasy points to opposing running backs this season than the Buccaneers (25.7 pts/gm), so start Jones with confidence.

Marques Colston, WR, New Orleans Saints (at Minnesota): It’s never easy to project the wide receiver position in New Orleans as quarterback Drew Brees does an excellent job of spreading the rock around his very deep and very talented arsenal of pass-catching targets. As for Colston, the guy has posted 100+ receiving yards in two of his last four starts and is coming off an impressive two touchdown performance against the Tennessee Titans in Week 14. Stick with the hot hand, as Colston and the Saints take on a Vikings defense this Sunday that is giving up an average of 25.2 fantasy points per game to opposing wide receivers (4th-most in NFL).

Jake Ballard, TE, New York Giants (vs. Washington): Ballard’s not the type of tight end who will blow the doors off the barn and advance you to the championship round all by himself, but the guy has been steady in 2011 and currently ranks in the top-12 in fantasy scoring at the TE position (standard scoring formats). Look for a respectable stat line Sunday against a Redskins defense that was just slashed and gashed by New England TE Rob Gronkowski to the tune of 160 yards and two scores. Through 14 weeks, Washington is surrendering an average of 9.6 fantasy points per game to opposing tight ends.

Vegas notes: The UNDER is 7-1 in the last eight meetings between these two teams in New York.

1. No team in the NFL is giving up more fantasy points to opposing D/STs than the Rams (12.2 pts/gm).
2. No team in the NFL is scoring fewer points per game than the Rams (11.8 pts/gm).
3. The Rams have committed ten turnovers in their last five games.
4. The Rams have surrendered 14 sacks in their last four games.
5. Do you really need me to continue?

Tony Romo, QB, Dallas Cowboys (at Tampa Bay): One of the defining characteristics that makes fantasy football so great is that fourth quarter collapses and the inability to perform in the clutch mean virtually nothing. I take it you see where I’m going with this. Romo has tossed three of more touchdown passes in three of his last five starts and is averaging 280.5 passing yards per game on the season. Those are some legitimate numbers, so don’t be shocked if the Dallas signal-caller posts a monster stat line Saturday in Tampa Bay against a Buccaneers de fense that ranks 27th in the NFL against the pass (248.8 yds/gm) and is surrendering an average of 21.0 fantasy points per game to opposing quarterbacks in 2011 (t-8th-most in NFL).

The Browns are going to have their hands full with Wells on Sunday.

Beanie Wells, RB, Arizona Cardinals (vs. Cleveland): Wells has found the end zone in two of his last three starts and has busted up most of the inferior run defenses he has faced in 2011. Guess what? The former Ohio State product is playing an inferior run defense this weekend! Not only does Cleveland rank 31st in the NFL against the run (150.9 yds/gm), but the Browns are surrendering an average of 20.9 fantasy points per game to opposing running backs this season (8th-most in NFL). Start Wells with confidence in Week 15.

Demaryius Thomas, WR, Denver Broncos (vs. New England): It’s hard to find another receiver who has produced more over the last two weeks than Thomas. The second-year wideout from Georgia Tech has caught 11 passes for 222 yards and three scores on 20 targets over his last two starts and finds himself in another favorable position Sunday against the Patriots. No team in the NFL is surrendering more fantasy points to opposing wide receivers than New England (30.5 pts/gm), so get Thomas back in the starting rotation and feel comfortable riding with quarterback Tim Tebow as well.

The pick: This game has created quite a bit a buzz around Las Vegas this week. How do you go against Tim Tebow and the Broncos at home getting seven points? How do you fade a red hot Tom Brady? With a gun to my head, I’ll buy the hook and will take the Patriots.

Head over to Page 2 for our Week 15 SIT recommendations!