Unbelievable. I tried to throw in the towel on this segment six weeks ago, but have luckily rattled off five winners since looking myself in the mirror and wondering where it all went wrong. It’s slim pickings this week, but I don’t believe I’ve used the Lions yet, so we’ll go with them. If they’ve already been selected, we’ll take the Seahawks.

DALLAS COWBOYS (-7) at Washington Redskins: Buy the half point and take this game at Dallas -6.5. I don’t care how close the ‘Skins have played the Cowboys over the last few years, here’s what matters: Since losing running back Tim Hightower and wide receiver Santana Moss, Washington has gone 0-5 straight up and against the spread and during that span is averaging only 10.6 points per game with 14 turnovers and 19 sacks allowed. Anything else you need to know?

CLICK HERE to check out the rest of the Week 11 lines. 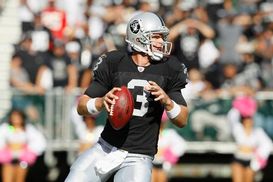 ICONCarson Palmer is staring to find the groove in Oakland.

Carson Palmer, QB, Oakland Raiders (at Minnesota): Slowly but surely, Palmer is working his way back into QB1 contention. The former Bengal completed 70% of his passes in Week 10 at San Diego for 299 yards and two scores and enters this Sunday’s showdown at Minnesota on extended rest. Meanwhile, the Vikings come into this one on short rest, having been blown out by the Green Bay Packers this past Monday night. Outside of the New England Patriots, no team in the NFL is surrendering more fantasy points to opposing quarterbacks than the Vikings (23.7 pts/gm), so we feel Palmer is in line for another solid performance.

The pick: A small lean towards the Raiders

Marshawn Lynch, RB, Seattle Seahawks (at St. Louis): I don’t know who lit the fire under Marshawn Lynch’s ass, but this guy has been balling out as of late. Lynch has carried the ball a ridiculous 55 times over his last two starts, racking up 244 rushing yards and two touchdowns in the process. In addition, the Seattle ball-carrier is currently riding a five-game touchdown streak. That doesn’t bode well for the St. Louis Rams, who currently rank dead last in the NFL in run defense (150.6 yds/gm) while giving up an average of 21.3 fantasy points per game to opposing running backs this season (t-6th in NFL).

Vegas notes: The Seahawks are 7-1 against the spread in the last eight meetings between these two teams.

David Nelson, WR, Buffalo Bills (at Miami): With Stevie Johnson battling a shoulder injury, look for Nelson to see an increase in targets this Sunday against a Miami Dolphins defense that currently ranks 25th in the NFL against the pass (256.3 yds/gm) and is giving up an average of 23.9 fantasy points per game to opposing wide receivers (t-7th-most in NFL). We aren’t predicting a huge game for Nelson, but think he makes for a solid WR3 this weekend.

Vegas notes: The Dolphins have covered the spread in three straight games, while the Bills are 1-3 ATS in their last four contests.

The pick: Dolphins -2. This team is a tough out right now and Fitzpatrick has been playing bad football ever since signing that fat contract.

Kellen Winslow, TE, Tampa Bay Buccaneers (at Green Bay): Admittedly, this one is a bit of a stretch. But Winslow has found the end zone in two of his last three games and has been targeted 34 times over his last four starts. In addition, keep in mind that the Packers are surrendering an average of 9.4 fantasy points per game to opposing tight ends this season (t-5th-most in NFL) and the Buccaneers will likely find themselves needing to throw all day long in an effort to keep pace. Garbage time numbers are in full effect here.

Vegas notes: The Buccaneers are 1-5 against the spread in their last six games overall, while the home team is 4-1 ATS in the last five meetings between these two teams.

The pick: Buy the half point and take Green Bay -13.5. It’s a square play, but how the hell could you bet on the Buccaneers in this spot?

Seattle Seahawks, D/ST (at St. Louis): This unit isn’t even in the top-20 in fantasy scoring at the D/ST position, so it’s more than likely they are sitting out there on waivers at the current moment. If you’re in a tough spot, don’t hesitate to pick up the Seahawks for a Week 11 situational start at St. Louis against a Rams team that ranks dead last in the NFL in scoring offense (12.6 pts/gm) and is giving up an average of 12.7 fantasy points per game to opposing D/STs (2nd-most in NFL) in 2011.

The pick: Already made above (buy the half point, take Seattle -2.5). 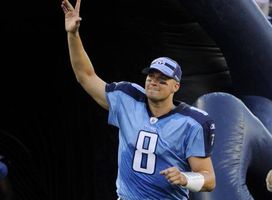 Quitely, Matt Hasselbeck has been averaging 248.1 passing yards per game this season.

Matt Hasselbeck, QB, Tennessee Titans (at Atlanta): Just like with Winslow, this one is a bit of a stretch as well. But how much would you benefit if we told you to start Philip Rivers or Tom Brady this week? Hass is actually in a pretty favorable spot entering Week 11 as he’ll be taking on an Atlanta defense that currently ranks 23rd in the NFL against the pass (253.8 yds/gm) and is giving up an average of 20.0 fantasy points per game to opposing quarterbacks (10th-most in NFL). Consider him a respectable QB1 for owners in leagues with 12 or more teams.

Vegas notes: The Titans are 0-5 against the spread in their last five games following an ATS win, while the Falcons are 8-2 in their last ten games as a home favorite of 3.5-10.0.

The pick: I don’t like it all that much, but I’ll take the Titans and the points.

Reggie Bush, RB, Miami Dolphins (vs. Buffalo): Ever since Kim Kardashian went back on the market, Bush has been balling out like he has something to prove. The former New Orleans Saint has racked up 313 total yards and three touchdowns over his last three starts and gets a crack at a Buffalo defense this Sunday that ranks 23rd in the NFL against the run (125.4 yds/gm) and is surrendering an average of 21.3 fantasy points per game to opposing running backs (t-6th-most in NFL). Expect another strong showing from Bush this weekend.

Vegas notes: The UNDER is 4-1 in the last five meetings between these two teams in Miami.

The pick: Already made above (Dolphins -2).

Denarius Moore, WR, Oakland Raiders (at Minnesota): With Jacoby Ford (foot) out of the lineup and Darrius Heyward-Bey in the doghouse, it looks like Moore will be Carson Palmer’s top target for Oakland’s Week 11 date at Minnesota. That’s fine, because this dude just torched the San Diego Chargers for 123 yards and two touchdowns in Week 10. Not only that, but Vikings CB Antoine Winfield is done for the season with a fractured clavicle, and all that does is hurt a defense that currently ranks 30th in the NFL against the pass (272.8 yds/gm) and is giving up an average of 26.1 fantasy points per game to opposing wide receivers this season (t-3rd-most in NFL).

Vegas notes: The UNDER is 5-1 in the Raiders’ last six games overall and 6-2 in the Vikings’ last eight games in November.

The pick: Already made above (Raiders -1).