Note: A big congratulations goes out to Maura Wilder, a National Football Post reader who won the FanDuel Week 11 FFFC qualifier! Maura is now headed to Las Vegas for a chance to win the $75,000 Grand Prize! Congrats!

Both Detroit and Seattle came through for us last Sunday, so this section of Starts, Sits & Smashes is alive for at least one more week. I believe the Jets are still on the board based on what we’ve used up until this point, so we’ll ride with New York in Week 12 against the Buffalo Bills.

CHICAGO BEARS (+4.5) at Oakland Raiders: Expect a heavy dose of the running game from Chicago as quarterback Jay Cutler is out for the next 6-8 weeks after undergoing thumb surgery on Wednesday. Keep in mind that the Raiders currently rank 26th in the NFL against the run, second in penalties called against (114) and 17th in turnover differential (-1). Meanwhile, Chicago ranks third in the NFL in turnover differential (+11). I think Caleb Hanie and the defense can keep it close enough to cover.

CLICK HERE to check out the rest of the Week 12 lines. 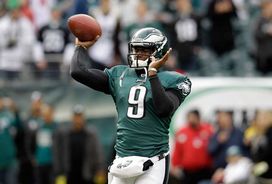 Look for Vince Young to improve on last week's effort and roll up a solid stat line vs. New England.

Vince Young, QB, Philadelphia Eagles (vs. New England): The former Titan looked rusty in his 2011 debut as a starting quarterback, but despite the errant throws and three interceptions, keep in mind that Young threw for 258 yards and two touchdowns while leading the Birds to an impressive upset win over the Giants. With another week of work under his belt, we’re confident Young will post a solid stat line Sunday against a Patriots defense that currently ranks dead last in the NFL against the pass (298.9 yds/gm) and is surrendering an average of 22.6 fantasy points per game to opposing quarterbacks this season (2nd-most in NFL). Consider Young a solid QB1 for owners in leagues with 12 or more teams.

Vegas notes: The Patriots are 4-0 against the spread in their last four games against teams with a losing record, while the Eagles are 1-7 ATS in their last eight home games.

DeAngelo Williams, RB, Carolina Panthers (at Indianapolis): You’d have to imagine the Carolina front office is disappointed they gave this guy a five-year, $43 million contract last July. After all, Williams has only rushed for 85+ yards in one game this season and hasn’t found the end zone since October 9th! However, Week 12 offers up a shot at redemption, as D-Will gets a crack at an Indianapolis defense that ranks 31st in the NFL against the run (145.6 yds/gm) and is giving up an average of 24.3 fantasy points per game to opposing running backs this season (3rd-most in NFL). Consider Williams a decent RB2/flex option for this Sunday. The same thing goes for backup Jonathan Stewart.

Vegas notes: Despite the fact that 79% of the bets already placed are backing the Panthers, this line has moved one point towards the Colts.

Brandon Lloyd, WR, St. Louis Rams (vs. Arizona): Ever since he was traded to the Rams back in mid-October, we’ve barely heard Lloyd’s name mentioned around the internets. Funny, because the guy is tearing it up with his new teammates, having found the end zone in three of his last four games while rolling up 12 or more targets in four of his first five St. Louis starts. Ride the lightning Sunday against an Arizona Cardinals defense that ranks 27th in the NFL against the pass (256.6 yds/gm) and is surrendering an average of 25.5 fantasy points per game to opposing wide receivers this season (4th-most in NFL).

Vegas notes: The favorite is 4-0 against the spread in the last four meetings between these two teams.

Kellen Winslow, TE, Tampa Bay Buccaneers (at Tennessee): Winslow made the “Starts” column last week and didn’t disappoint, hauling in nine passes for 132 yards on 11 targets in a 35-26 loss at Green Bay. For those of you scoring at home, Winslow has now been targeted 11 or more times in three of his last five games as quarterback Josh Freeman has been working to make him a bigger part of the offense. We’re thinking another solid stat line is coming down the pipes this Sunday as Tampa Bay heads to Tennessee to take on a Titans defense that is giving up an average of 9.9 fantasy points per game to opposing tight ends this season (3rd-most in NFL). Winslow is worthy of a starting roster spot in leagues with ten or more teams.

The pick: Buccaneers +3.5 (I have very little confidence in this one).

Seattle Seahawks, D/ST (vs. Washington): This unit ranks just 18th in fantasy scoring at the D/ST position, but keep in mind that the Seahawks have given up just 24 total points over their last two games. In addition, Seattle plays host to a Washington Redskins offense on Sunday that has lost six straight contests while scoring an average of just 12.8 points per game. Be advised that the ‘Skins are surrendering an average of 10.6 fantasy points per game to opposing D/STs this season (6th-most in NFL), so if you’re looking for a situational start for this Sunday, look no further than the Pacific Northwest.

ICONRyan and the Falcons welcome a Vikings team that is giving up more fantasy points to opposing quarterbacks than any other team in the league.

Matt Ryan, QB, Atlanta Falcons (vs. Minnesota): Ryan has turned in a disappointing fantasy campaign through the first 11 weeks of the season, but the Atlanta signal-caller has begun to elevate his game as of late, throwing for over 315 yards in each of his last two starts. Stick with him in Week 12, as the Falcons play host to a Minnesota Vikings defense that is giving up more fantasy points to opposing quarterbacks than any other team in the league (23.2 pts/gm).

Vegas notes: The Vikings are 2-9-1 against the spread in their last 12 games vs. a team with a winning record, while the Falcons are 8-1 ATS in their last nine games against teams with a losing record.

Shonn Greene, RB, New York Jets (vs. Buffalo): Greene rolled up 76 rushing yards against Buffalo back on November 6th before exiting the game early due to injury. Not too shabby, but we’re anticipating a juicier stat line for the rematch. The Bills are reeling and have lost four of their last five outings. In addition, this defense currently ranks 20th in the NFL against the run (122.4 yds/gm) and is surrendering an average of 21.0 fantasy points per game to opposing running backs this season (7th-most in NFL). Backup Joe McKnight will get some touches, but we think Greene makes for a solid RB2/flex option for Week 12.

The pick: The Jets are in a must-win situation and come into this one on extra rest, while the Bills are without stud running back Fred Jackson. It’s a lot of points, but there’s no way I’m taking the Bills. Jets -9.

Larry Fitzgerald, WR, Arizona Cardinals (at St. Louis): Most consider Fitzgerald a must-start fantasy option no matter what the situation, while others find themselves wrestling with the decision each week due to shoddy quarterback play from Arizona’s signal-callers. The bottom line for Week 12 is that you should insert Fitz into your starting lineup with 100% confidence. He’s found the end zone four times over his last three starts and takes on a Rams defense this Sunday that is giving up an average of 25.5 fantasy points per game to opposing wideouts (4th-most in NFL). Start Fitzgerald and don’t look back.

Vegas notes: The UNDER is 7-0 in the last seven meetings between these two teams.

Head to Page 2 to check out this week’s SITS!!