It was tough sledding there for a while, but the New York Jets pulled through over the Buffalo Bills last Sunday to keep us alive heading into Week 13. The board is getting thinner and thinner by the week, so it’s time to get a little creative. Lets ride with the Tampa Bay Buccaneers this weekend over Cam Newton and the Carolina Panthers. I fully expect LeGarrette Blount to have a BIG day.

ARIZONA CARDINALS (+4.5) vs. Dallas Cowboys: Something stinks here. 90% of the early action is coming in on the Cowboys, but the line has moved from Dallas -6.5 to Dallas -4.5. That means the big money is coming in on the Cardinals. Keep in mind that Arizona has covered the line in three of their last four games while the Cowboys have failed to cover the number in four of their last five outings. In addition, Dallas is just 3-12-1 ATS in their last 16 games as a favorite.

CLICK HERE to check out all of the lines for Week 13. 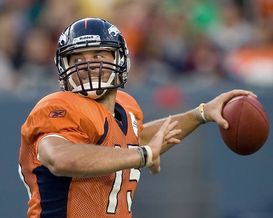 ICONIt may not look pretty, but Tim Tebow knows how to deliver for fantasy owners.

Tim Tebow, QB, Denver Broncos (at Minnesota): Did you know that Tebow is averaging 8.3 fantasy points per game over his six starts this season? That may not seem like a lot—and it isn’t—until you realize that number only reflects what the former Heisman Trophy winner has done with his legs. Tebow has rushed for 416 yards and two scores in six starts, but should be able to find more success than usual through the air this Sunday against a Minnesota Vikings defense that is giving up more fantasy points to opposing quarterbacks than any other team in the league (23.4 pts/gm). It never looks pretty, but dammit, it sure is effective.

Vegas notes: The Broncos have covered the spread in five of Tebow’s six starts this season, while the Vikings are just 4-5-2 ATS in their 11 outings.

Reggie Bush, RB, Miami Dolphins (vs. Oakland): This is a far distance for Oakland to travel, and that’s before you take into account the fact that their defense ranks 27th in the NFL against the run (135.3 yds/gm) and is surrendering an average of 21.3 fantasy points per game to opposing running backs this season (t-5th-most in NFL). Keep in mind that over his last five starts, Bush is averaging 95.0 total yards per game and has found the end zone four times during that stretch. Consider the former Saint a solid RB2/flex option for Week 13.

Vegas notes: The Dolphins have covered five straight spreads while the Raiders are 3-7-1 ATS in their last 11 games as a road underdog of 0.5 to 3.0.

The pick: The Fish are at home on extra rest against a team that has to travel across the country to play a 1:00pm game. We’ll back Miami (-3) in this one, but will buy the half point to get ourselves off the key number of 3.

Jordy Nelson, WR, Green Bay Packers (at New York Giants): Did you know that in standard scoring formats, Nelson is currently a top-five fantasy wideout? The guy has eclipsed 100 receiving yards in three of his last six starts and has found the end zone five times over his last four games. Look for Nelson to continue producing at a high level Sunday in New York against a Giants defense that ranks 26th in the NFL against the pass (251.2 yds/gm) and is surrendering an average of 23.9 fantasy points per game to opposing wideouts (7th-most in NFL).

Vegas notes: How the hell do you pick against Green Bay at this point?

Brandon Pettigrew, TE, Detroit Lions (at New Orleans): This game has shootout written all over it, so the hope is that Pettigrew sees enough targets against a Saints defense that is giving up an average of 8.9 fantasy points per game to opposing tight ends this season (t-8th-most in NFL). The guy currently ranks sixth in targets (82) at the tight end position, so we feel comfortable riding with Pettigrew for Week 13.

Vegas notes: The Saints are 5-0 against the spread in five home games this season.

Atlanta Falcons, D/ST (at Houston): The Falcons haven’t done a whole lot for fantasy owners on the defensive side of the ball this season, but it’s tough not to like this matchup when you consider the fact that rookie T.J. Yates will start at quarterback for the Texans. Remember, after taking over for backup Matt Leinart last week against the Jacksonville Jaguars, Yates and the Texans scored a grand total of zero points in the second half. This is a roll of the dice we’re willing to make. 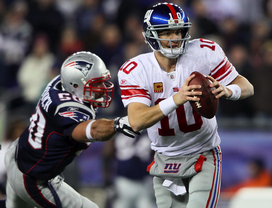 A shootout in New York would be ideal for Manning owners.

Eli Manning, QB, New York Giants (vs. Green Bay): The wheels are coming off the bus in New York as the Giants have dropped three straight games and are staring down the barrel of a brutal matchup with the undefeated Packers. But the upside here for fantasy owners is the fact that Green Bay currently ranks 31st in the NFL against the pass (287.8 yds/gm) and is surrendering an average of 22.2 fantasy points per game to opposing quarterbacks this season (3rd-most in NFL). Big Blue will probably lose thi s game, but not without a solid statistical effort from Manning.

DeAngelo Williams, RB, Carolina Panthers (at Tampa Bay): Williams made an appearance in the Starts category last weekend and didn’t disappoint, rushing for 69 yards ant two touchdowns against the pitiful Indianapolis Colts. Ride the lightning again this weekend as D-Will and company head to Tampa Bay for a divisional showdown with a Buccaneers defense that currently ranks 30th in the NFL against the run (139.7 yds/gm) and is giving up an average of 24.9 fantasy points per game to opposing running backs (2nd-most in NFL). The only team getting gashed worse by opposing ball carriers in terms of fantasy production this season is the Carolina Panthers, so get LeGarrette Blount in your starting lineups as well on Sunday.

Michael Crabtree, WR, San Francisco 49ers (vs. St. Louis): Crabtree has struggled through much of the 2011 season, but he’s just two weeks removed from a 120-yard outing against the Arizona Cardinals and should find some success Sunday against a St. Louis defense that is surrendering an average of 24.0 fantasy points per game to opposing wide receivers this season (t-5th-most in NFL). We don’t think he’ll blow up in Week 13, but Crabtree does make for a solid WR3.

Vegas notes: The favorite is 5-2 against the spread in the last seven meetings between these two teams.

The pick: This is a no play for me, but if I have to throw a suggestion out there, I’ll lay the big number (-13.5) and will take the Niners at home on extra rest.