The Buccaneers’ blowout defeat at the hands of the Carolina Panthers in Week 13 put the squeeze on a nice little hot streak we had assembled since coming up short early in the season. For those of you who have actually made it this deep into survivor season, congratulations. I’m not sure which teams you still have left to select from, but Detroit, Baltimore, Seattle and San Diego are all solid plays for Week 14. Best of luck.

OAKLAND RAIDERS (+11.5) at Green Bay Packers: We broke this game down on Wednesday in our “3 points spreads to keep an eye on” column, so we’ll keep this analysis brief. Despite the fact that 84% of the action is coming in on Green Bay, this line is actually moving in Oakland’s direction. Take note that the Raiders are 7-1 against the spread in their last eight games following a straight-up loss, while double-digit favorites are just 11-16-2 ATS in 2011, which includes Pittsburgh’s ATS loss to the Cleveland Browns on Thursday night.

CLICK HERE to check out all the lines for Week 14.

Philip Rivers, QB, San Diego Chargers (vs. Buffalo): Far be it from the media to give this guy some credit when he’s playing well after publicly blasting him over the first three months of the season. Rivers hasn’t thrown an interception in two weeks and is coming off his most impressive performance of the year, which featured a 78.6% completion rate, 294 passing yards and three touchdowns against the lowly Jacksonville Jaguars (QB Rating: 146.1). Look for another big outing Sunday at Qualcomm Stadium against a Buffalo Bills defense that ranks 19th in the NFL against the pass (234.2 yds/gm) and is surrendering an average of 19.7 fantasy points per game to opposing quarterbacks (12th-most in NFL). The Bolts are poised to go on a run.

The pick: I’ll buy it down to San Diego -6.5 and will ride with the Chargers. Their win last week at Jacksonville feels like it could be the start of something. 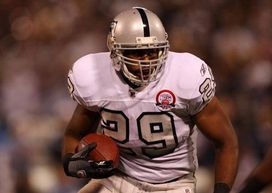 Look for Michael Bush to bounce back this week against the Packers.

Michael Bush, RB, Oakland Raiders (at Green Bay): Don’t let one bad week from Bush persuade you into thinking that he can’t deliver in Week 14 at Green Bay. Remember, this guy had found the end zone in three straight games prior to last Sunday’s meltdown in Miami. The only way to beat the Packers is to keep Aaron Rodgers and the offense off the field for as long as possible. That means you have to move the sticks and feature a heavy dose of the run. Green Bay ranks just 31st in the NFL in total defense this season, so don’t be shocked if a hungry and highly motivated Raiders team keeps this one close on Sunday.

Santana Moss, WR, Washington Redskins (vs. New England): No team in the NFL is currently surrendering more fantasy points to opposing wide receivers than the New England Patriots (28.7 pts/gm). This total opened at 48 in Las Vegas, so it’s clear that oddsmakers are expecting a lot of points to be scored. If the Redskins can’t figure out a way to slow down Tom Brady, Rex Grossman will be forced to throw it early and often. We expect Moss to see a minimum of 10 targets on Sunday.

Dustin Keller, TE, New York Jets (vs. Kansas City): Despite a two-touchdown outing against the Buffalo Bills in Week 12, Keller hasn’t produced all that much over the last couple months of the season, so we understand if you’re hesitant to get him in the starting lineup this Sunday. Just keep in mind the fact that Kansas City is giving up an average of 9.5 fantasy points per game to opposing tight ends this season (3rd-most in NFL). Barring a classic Mark Sanchez meltdown, Keller should come away from this one with a respectable stat line.

Seattle Seahawks, D/ST (vs. St. Louis): This one couldn’t be easier. For starters, no team in the league is giving up more fantasy points to opposing defenses than the Rams (12.5 pts/gm). St. Louis’ offense is dreadful, as evidenced by the fact that the team ranks 31st in the NFL in total offense (284.0 yds/gm) and dead last in scoring (11.7 pts/gm). Oh yeah, did we forget to mention that virtually every quarterback on the Rams’ depth chart is either out with an injury, playing hurt or not very good? The Seahawks should have no problems limiting this unit Monday night in Seattle.

Vegas notes: The Rams are 1-8 against the spread in their last nine games against the Seahawks. 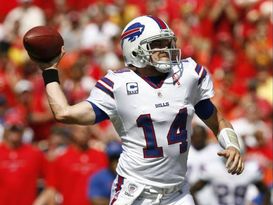 Fitzpatrick and the Bills could be headed for a Southern California shootout on Sunday.

Ryan Fitzpatrick, QB, Buffalo Bills (at San Diego): Fitzpatrick is slowly working his way back to QB1 status after a complete collapse that immediately followed the signing of his name to a fat new contract extension. He’s thrown for 260+ yards in each of his last two starts and tossed three touchdowns passes last Sunday against Tennessee. Look for another bit outing in Week 14 against a Chargers defense that is currently surrendering an average of 20.0 fantasy points per game to opposing quarterbacks this season (t-10th-most in NFL).

Reggie Bush, RB, Miami Dolphins (vs. Philadelphia): With the exception of Seattle’s Marshawn Lynch, is there any running back in the league hotter than Reggie Bush at the current moment? Over his last six starts, the former Heisman Trophy winner is averaging 95.8 total yards per game with 18 receptions and five touchdowns. Ride the wave again in Week 14, as Bush takes on a Philadelphia Eagles defense that ranks 17th in the NFL against the run (115.6 yds/gm) and is giving up an average of 21.3 fantasy points per game to opposing running backs this season (6th-most in NFL).

Vegas notes: Despite a 4-8 record, this is only the third time in 13 games this season that the Eagles are listed as the underdog.

Anquan Boldin, WR, Baltimore Ravens (at Indianapolis): Boldin has only found the end zone one time over his last six starts, so it’s safe to say at this point that he’s been somewhat of a disappointment this season. However, Sunday in Baltimore offers up a chance for redemption against an Indianapolis Colts defense that is surrendering an average of 24.5 fantasy points per game to opposing wide receivers this season (7th-most in NFL). The Ravens may go run-heavy in the second half should they get up early in this one, but we still think Boldin has an excellent shot at finding the end zone this week.