After a seven-year stint in Houston that saw his production decrease dramatically over the last two seasons, wide receiver Kevin Walter is now a free agent.

Per Adam Schefter of ESPN, the Texans have released the ten-year veteran, meaning Walter is immediately free to sign with another organization. 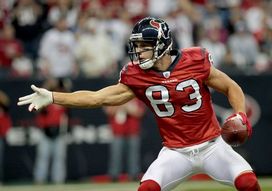 ICONKevin Walter's seven-year run in Houston has come to an end.

At one time considered to be the future No. 2 wideout to Pro Bowler Andre Johnson’s No. 1, Walter was never able to demonstrate the consistency the Texans were hoping to get out of the position. The 31-year-old caught a career-high 65 passes in 2007 before watching his receiving totals dip in each of the following four years.

Walter and the Texans reached an agreement on a five-year, $21.5 million deal (with $8 million in guaranteed money) back in 2010. Following his signature on the dotted line, Walter caught just 80 passes for 992 yards and five touchdowns over his next 31 games.

Don’t be stunned if the organization looks to bring in another veteran during free agency.