The death of the workhorse running back

If we’ve learned anything from the theory of evolution as it relates to sports it’s that those who are able to adapt to their constantly changing surroundings are more likely to find success than those who remain content with the status quo.

Take newly crowed Masters Champion Bubba Watson as an example. The current toast of the PGA Tour, Watson averaged 290.38 yards off the tee at Augusta National last week (fourth) with a pink Ping driver that will soon be coming to a municipal golf course near you—much to the dismay of golf purists who likely believe that anyone walking the links with a pink driver is probably better-suited to playing each hole from the red tees. 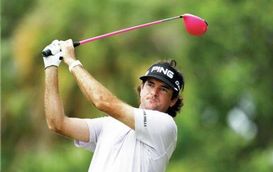 The improvements in golf club technology allow players like Bubba Watson to drive the ball well over 300 yards consistently.

While Watson’s success at Augusta can be attributed to more than just a powerful tee shot, the 33-year-old from Florida would never have been in position to win his first green jacket had he been playing with the same type of wood driver that Byron Nelson used in 1937. The evolution of technology in the game of golf has allowed players to hit the ball farther, which in turn has made it easier to splash down on the greens now that golfers are hitting their approach shots from closer distances.

And it should come as no surprise that the two golfers who led the field in driving distance on Sunday (Watson and Louis Oosthuizen) were the same two players competing for the green jacket as the Masters went into a sudden-death playoff.

<p> NFL offenses have evolved for the better in a similar fashion to how drivers have improved scoring in the game of golf. Golf club manufacturers have turned to composite metals over wood in the same way that NFL coaches have turned to receivers over running backs.

There was a time when a workhorse running back was a highly coveted commodity in the NFL. Over a five-year span from 1986-1990, 27 running backs were selected during the first round of the NFL Draft, for an average of 5.4 per year.

Compare that to the 28 running backs who were drafted in the first round over a ten-year span from 2002-2011 (2.8 per year) and you will quickly realize that the position doesn’t carry the same level of importance that it did 20-25 years ago.

To put it bluntly, the workhorse running back is a dying breed that finds itself on the brink of extinction in today’s NFL.

Many of you will be quick to point to the success and gaudy stat lines of Vikings running back Adrian Peterson. But Peterson is the once-in-a-decade outlier in this equation. And while the rare specimens with his unique skill set will always have a place in professional football, their presence doesn’t necessarily translate into Super Bowl wins today like it did 20 years ago. 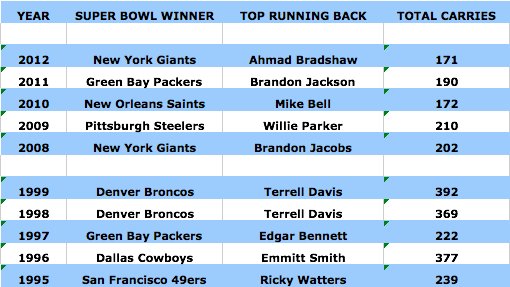 As you can see from the chart above, the last five Super Bowl Champions reached the sport’s ultimate game with running backs who came nowhere near the production or talent levels of a guy like Peterson. Those five teams won the title because they played excellent defense and got solid play out of the quarterback position. The running game was important, but it wasn’t the reason a Vince Lombardi Trophy was achieved.

But if you compare the last five Super Bowl winners to the five champions from 1995-1999, you’ll notice the featured running backs on the latter teams played a far more significant role in their team’s success. In fact, Terrell Davis won the NFL MVP award in 1998 and Emmitt Smith took home the same prize in 1993. Over the last 11 years, only two running backs (Shaun Alexander, LaDainian Tomlinson) have been named the league’s Most Valuable Player and neither has a Super Bowl win on their resume.

The chart above illustrates another example of how workhorse running backs are no longer as integral to the achievement of regular season success and trips to the postseason as they were in years past.

At the turn of the millennium, NFL offenses relied on 300+ carry running backs to help get their teams to the playoffs. But take notice that the average amount of carries for workhorse running backs on playoff teams over the last three years has plummeted as low as 259.1 in 2010 as compared to the staggering 317.8 carries that were averaged just 12 years before.

From 1998-2002, four of the five Super Bowl Champions had a running back on the roster who recorded 287 or more carries en route to a title. But in the ten Super Bowls since then, only one team has featured a running back who amassed more than 255 carries in a season (Corey Dillon in 2004 with New England). It’s not rocket science. As NFL offenses continue to build around the passing game, the demand for a workhorse running back who can pound the football 300+ times a season decreases. In fact, only two players eclipsed the 300-carry mark last season (Maurice Jones-Drew, Michael Turner) and neither player notched a playoff win.

But the New York Giants, on the other hand, won February’s Super Bowl with the league’s 32nd-ranked rushing offense and a handful of running backs, none of whom carried the football more than 171 times during the regular season.

This research isn’t meant to imply a lack of value in the running back position. Multi-tool ball carriers like Alabama’s Trent Richardson who can block and catch the ball out of the backfield will almost always have a place in the draft’s top-ten picks.

Just don’t be surprised if he’s the only running back selected during this year’s first round.