Last week we examined a five-year study on home field advantage in the National Football League as it relates to the Las Vegas point spread. Our mission was to identify the teams that exceed the home line by the most points, with attention also paid to both profitability and margin of victory. The results can be obtained by clicking here. 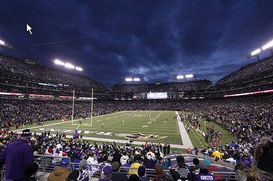 Since 2008, the Ravens have exceeded the point spread at M&T Bank Stadium by an average of 5.2 points per game, tops in the NFL.

The problem with last week’s research was that it only showed us half of a much bigger picture. Sure, the Patriots exceeded the home point spread by an average of 4.1 points per game from 2008-2012 (fourth best in NFL), but if New England had even more success against the line playing on the road, does that mean the organization enjoys a significantly greater home field advantage than the 28 teams that were ranked below them?

The answer is no, but we’ll get to that a little bit later. For the moment, let’s take a look at how each of the 32 NFL franchises performed against the Las Vegas point spread while playing on the road from 2008-2012.

SU: Straight-up
ATS: Against the spread
Avg. points above the spread: The amount of points, on average, in which the road team surpasses the point spread. EX: If Baltimore is favored by 4 points and wins by 9, the Ravens surpassed the spread by +5 points.
ROI: Return on investment, assuming that bettors wagered $110 to win $100 on every road game played. 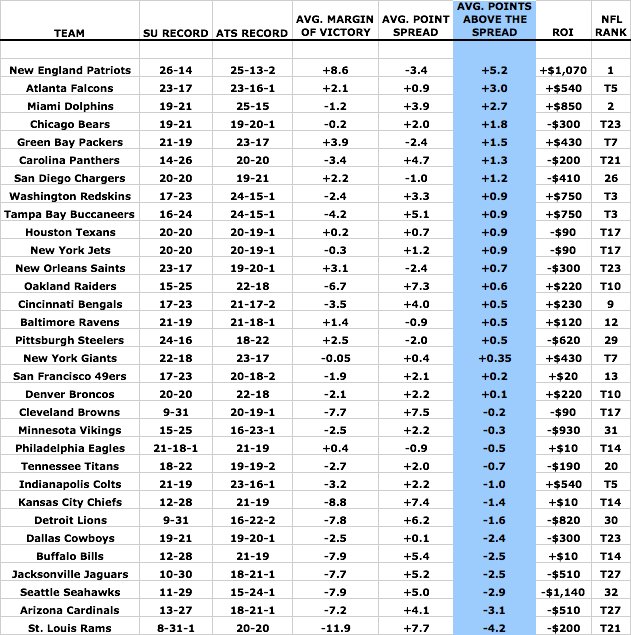 New England Patriots (+$1,070): Have covered the number on the road at least five times in each of the past three years.

Miami Dolphins (+$850): One of the worst teams in the NFL against the point spread at home since 2008 (14-24-2 ATS), the Dolphins have been money in the bank for road bettors during that same time period, thanks in large part to a stretch from 2011-2012 in which the team covered eight times in nine games.

Indianapolis Colts (+$540): Thanks mostly to the Peyton Manning era, as rookie quarterback Andrew Luck went just 4-4 ATS on the road in 2012.

Minnesota Vikings (-$930): Failed to cash a winning ticket in eight straight road games during an abominable stretch from late 2009 to 2010.

Detroit Lions (-$820): Remember that 0-16 toilet clogger of a season back in 2008? The Lions actually went 6-2 ATS on the road that year, highlighted by a 31-21 loss at Indianapolis when Detroit covered the very reasonable 16.5-point spread.

Arizona Cardinals (-$510): Went 4-4 ATS on the road last season, but that’s pretty much where the positive stats conclude.

Jacksonville Jaguars (-$510): Not profitable in any situation imaginable. Well, maybe if they played host to UNLV, who hasn’t won a road game since 2009. But a home-and-home series would like result in a split, costing you the juice.

Not only did the New England Patriots turn a greater road profit than any other team in the business from 2008-2012, the franchise also soared past the average Las Vegas line by a league-best 5.2 points per away contest. That kind of dominance raises the question as to whether or not the Pats were being undervalued by bettors during the last five campaigns. Backing New England has been a very popular play in Sin City over the last decade, but had bettors recognized the magnitude with which the Patriots were covering the number on the road, you would have to imagine even more money would have poured in on Tom Brady and company, forcing bookmakers to raise the team’s average road line of -3.4. 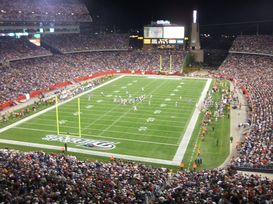 Whether it be Gillette Stadium or elsewhere, the Patriots have gotten it done against the line since 2008.

Although to a lesser extent, the same question could be raised in regards to Atlanta and Miami. The Falcons have covered their average road point spread by a field goal, while the Dolphins check in just shy of that mark at +2.7 points per away contest. Both teams also turned a sizeable profit for their backers while cruising past their respective average point spreads.

On the flip side of this equation lie the Arizona Cardinals and St. Louis Rams, whom have both fallen more than a field goal shy of their average road point spreads since 2008. But bettors were obviously throwing enough coin down on each of these two franchises over the last five years to prevent the books from raising either team’s average road point spread. Even at a league-worst line of +7.7 points per game, the Rams have still gotten blown out by an average of 11.9 points per game since 2008.

And then there’s the infamous home/road dichotomy of the Seattle Seahawks, who have been simultaneously terrific and awful over the last five years depending upon the venue.

Funny thing about those Seahawks… 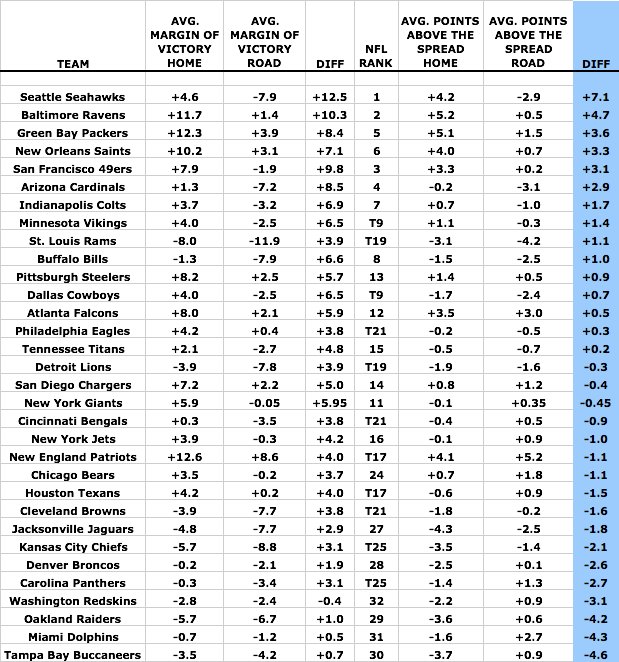 According to the blue differential column, the New England Patriots (-1.1) aren’t any more likely to blow an opponent out against the spread at home then they are on the road. In fact, the Patriots are actually performing better against the number when playing away from Gillette Stadium.

The Patriots are one of 11 teams that have posted an average points above the spread differential of +/- 1.0. But it doesn’t take more than a few seconds to realize that not everybody is playing that close to the number.

No team in the National Football League has demonstrated a more significant average points above the spread differential than the Seattle Seahawks, who are playing an astounding 7.1 points vs. the spread better at home than they are on the road since 2008. In addition, Seattle’s average margin of victory differen tial also registers at a league-best +12.5 points per game.

The bookmakers and betting public are now well aware of this fact following Seattle’s 11-5 playoff campaign that saw the Seahawks go an impressive 7-1 ATS at home last year. So as we continue to inch closer towards the start of the 2013 season, we should all be anticipating inflated lines when it comes to games being played at CenturyLink Field.

The only question now is whether or not Seattle’s home field dominance holds up against a more aggressive betting line and more supportive wagering public.