The New England Patriots are an absolute juggernaut. Granted, the team hasn’t won a Super Bowl since 2005, but Bill Belichick’s bunch has gone an astounding 64-16 during the regular season over the last five years.

To translate that into numbers you bettors are more comfortable with, if you had laid $110 to win $100 on every regular season game New England has played since 2007, you would have turned a profit of $980.

Not bad. Especially when you consider the fact that since 2007, the Patriots have turned a profit for bettors in every single regular season except 2009 (7-7-2 against the spread).

But today’s focus isn’t on Tom Brady and the boys from up north. It’s on the ripple effect that New England causes for the other teams in the NFL. More specifically, we’re going to examine what happens when a team is listed as an underdog in the game following its matchup with New England.

This isn’t the type of trend that should send bettors running to the window, but at a 60% cover rate, it’s certainly worth noting. However, any bettor who was willing to follow this trend for each game over the last ten years would have turned a profit in eight of ten seasons (trend went 4-4 in ’08 and 3-4-1 in ’06). 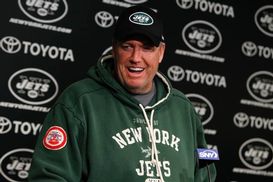 ICONOver the last ten years, the New York Jets are 8-3 ATS when lined as an underdog in the game after they play New England.

But the analysis doesn’t stop there. We can give ourselves an even bigger edge by going deep inside the numbers listed in the chart at the end of this story.

One may argue that the reason for this edge is the effect public perception has on the Las Vegas point spread. Taking an ass-kicking from the Patriots is sure to have the casual bettor exercising caution when studying that same team’s chances of covering the number in its next matchup.

But look at it like this: Over the last ten years there have been 20 games in which a team lost to the Patriots by 20 or more points and then was listed as an underdog for its next matchup. And in those 20 games, the dog has gone 12-7-1 ATS (.632). There’s an even bigger edge when studying just the last five years, as the dog has gone 9-4 ATS (.692) after taking a 20+-point beating from New England.

But what happens when a team beats the Patriots and then comes back as an underdog for its next matchup? I’m glad you asked, because that scenario gives us an edge over the book as well. There have been 17 games played since 2002 in which a team beat New England and then was posted as an underdog for its next matchup. Those teams went 11-6 ATS (.647).

So let’s put the whole puzzle together. What happens when a team loses to the Patriots by 20 or more points and is then listed as an underdog of nine or more for its next game?

Ok, great. So how does this information help us in 2012? That’s an excellent question. Let’s take a look at matchups that occur directly after the New England game. What we’re hoping to find are teams listed as underdogs the game after playing the Patriots. What we really want is for New England to beat that team by 20 or more points, followed by Vegas hanging said team as a dog of nine or more for its next matchup. We’ll use Cantor Gaming’s lines for Weeks 1-16, but keep in mind that some of these numbers have changed and will continue to change throughout the season.

*Team listed in caps play the Patriots in previous matchup.

Interesting. The 49ers—a team we have already predicted will suffer a regression in the wins column in 2012—makes this list four times in the wrong spot.

I guess that’s two things we need to keep an eye on this season.

Here’s the breakdown of all 71 games from our study:

*Team listed in caps is the organization that played New England in its previous game.