The group text messages have been draining my cell phone battery with greater frequency over the past few days. Sporadic at first, the volume has increased like a 4:00am infomercial that abruptly wakes a passed-out soul content to a night spent unconscious on the couch. The suggestions (demands?) for dates, times and rule changes have been the primary topic of discussion, as the tyrannical fantasy football commissioners I have chosen to play under for the last decade attempt to get organized.

Draft season is upon us.

Editor’s note: Ed, if you’re reading this, I absolutely refuse to switch leagues this season. We’ve spent the last decade playing with the same format at the same location. It’s not our fault that you’re too damn lazy to get the early bird discount.

Indulge me for a moment as I share with you an example of how not to schedule a fantasy football draft. I hate group text messages almost as much as I hate 55 mile-per-hour drivers in the left hand lane. They veer of topic almost instantaneously, confining half of the unlucky recipients to cellular purgatory. Good luck trying to conduct a professional phone call with a cell that keeps vibrating crucial information such as the defending champion’s recent weight gain.

In an effort to eliminate this nuisance from a summer spent managing the latest of several sunburns, I always agree to the first date and time offered. Living thousands of miles from the majority of leagues in which I play, virtually all of my drafts are conducted over the phone or computer. My rationale is that I’ll find a way to make any date and time work just so long as it gets me off that damn group message. 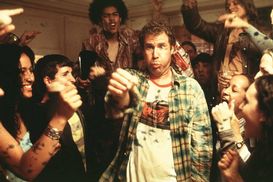 This approach has had several drawbacks over the last few years. In 2012 I conducted a three-hour draft from the LVH sports book because I didn’t have enough time to race home from a bet I had just placed (it lost). Two years ago I put my Old Man behind the wheel of our Las Vegas-bound automobile in Iowa while I rode shotgun, orchestrating two drafts simultaneously. This was both uncomfortable and frustrating to say the least, but it reinforced the priceless concept of preparation, as Hannibal Smith’s signature line, “I love it when a plan comes together” rattled around my half-empty dome.

The moral of the story is that I don’t want you to be like me. Put the time into getting the perfect draft date set up and be willing to compromise with the other knuckleheads you call friends. As people get older they tend to lose touch, even if the marvels of twitter, facebook and FaceTime allow us the opportunity to stay connected more so than ever before. Draft day is special. It opens a four+ hour window of sloth, allowing every member of the league to forget his or her responsibilities for the time being while reverting back to their high school/college degenerate self.

Embrace the chaos. And follow these rules to make the most out of the big day.

Rule No. 1: Sacrifice whatever is necessary for the best possible date

Why: Friday night and Saturday afternoon/evening are the optimal options. You absolutely do not want a day at the office on the schedule for the following morning. Weekday drafts come complete with shackles, as owners limit the booze intake while keeping a close eye on the time. This is unacceptable. What you’re striving for here is freedom. Freedom to stay up late, freedom to drink yourself stupid, freedom away from the wife and kids. You can cut the lawn on Sunday or when you get home from work on Monday. Fantasy drafts happen once a year. Give them the respect they deserve with proper scheduling.

Rule No. 2: Everybody brings something

Why: This isn’t high school, when it was just as permissible to show up empty handed as it was to crash the party in general. You want this shindig stocked from top to bottom with food (ribs, steak, sausage, burgers…you get the idea) beverages and munchies. Gluttonous behavior is to be encouraged, not shunned. Embrace the team concept on this one, as it will be the last time that day that you attempt to help anybody but yourself. 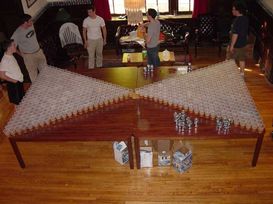 This is how fantasy championships are won.

Why: If the first thought that came to your mind was, “hire strippers,” then I applaud you, good sir, for you know not the boundaries of decorum. But the hiring of exotic dancers for a fantasy football draft party may be a bit much for some, so it’s necessary to suggest some less jiggly alternatives. I recommend a beer pong tournament, although cornhole and pool meet Rule No. 3’s requirements as well. Remember, this is a party with a purpose, not an errand with a time limit. Go big or go home.

Rule No. 4: Leave the significant others and kids at home

Why: I don’t want to watch my language, my alcohol intake or my attitude. For this one day a year, I do not want to set an example. I want to get inside everybody else’s head and mess with their draft strategies. I want to remind the multiple deadbeats who still owe me money from last season’s second-place finish that they are, in fact, deadbeats. I want to make them feel lousy about that, too. What I don’t want is to watch moms changing diapers, hear girlfriends tell their boyfriends to “slow down” or listen to anything that pertains to weddings, honeymoons or interior decorating. Save that garbage for Couple’s Pictionary Night. That check I gave you for your wedding cashed, right? You sent me a thank you note, didn’t you? Good. We’re done here.

--Rule No. 4 (b): If for some bullshit reason it is absolutely necessary to bring the Mrs., I don’t want to hear her thoughts on which players I should be drafting. It is not ok for girlfriends from Buffalo to tell boyfriends from Philadelphia that, “You should draft more Bills players because they are going to have a good year (Sorry, Niki).” This is not my first rodeo. I know damn well that the Bills stink, but I’m exercising restraint by not saying that to your face.

Rule No. 5: Establish an “On the Clock” rule and stick to it

Why: While I absolutely want to enjoy myself at this party for as long as possible, I do not want to watch you sweat nacho cheese for 11 minutes while debating the pros and cons of Andre Johnson vs. Larry Fitzgerald. On average, fantasy owners have anywhere from 10 to 20 minutes in between each selection. Spend that time wisely. Nobody says you can’t take a leak or grab another cold one, but dedicate at least a few minutes of that precious time updating your draft board and crossing off the names that have already been chosen. There’s absolutely no reason why mass hysteria should break out because the player you wanted was grabbed one spot before you hit the clock. Have a Plan B on deck in the event that happens, so we don’t have to watch your greasy hands fumbling around with the 46 printed sheets of rankings you brought to the party.

I suggest a clock limit of one minute, but I’m an impatient bastard. Two or three minutes, however, is plenty of time to make a selection. Fail to pull the trigger in the allotted time and the next man’s up. Sorry, we aren’t your parents. You’re a big boy tasked with making big boy decisions.

< strong>Rule No. 6: Engage in post-draft reflection

Why: The selection process has reached its inevitable conclusion and the entire league is half in the bag. Gather everybody around the draft board for a final beer (or four) and proceed to berate each other for everything from individual selection mistakes to entire roster backfires. Message boards exist in fantasy football leagues to encourage trash talking, but the vitriol shouldn’t be limited to in-season internet postings. Face to face slander is even more enjoyable and there’s no better time to engage in this male bonding ritual than immediately after the draft.

Why: This one speaks for itself and should never be an issue. After all, if you followed Rule No. 4, then you’ve got a sober wife or girlfriend at home who can come scoop your drunk ass up and get you back to the casa safely.

Rule No. 8: Apologize to your significant other for getting too drunk at the draft party