Conflicting reports have emerged in recent days regarding how the St. Louis Rams will handle the current contract of quarterback Sam Bradford. A four-year veteran out of Oklahoma who was selected first overall by the Rams during the 2010 draft, Bradford has two years left on a contract that carries salaries of $14.015 million and $12.985 million and cap hits of $17.610 million and $16.580 million in 2014 and 2015, respectively. At the current moment, only six quarterbacks (Aaron Rodgers, Drew Brees, Jay Cutler, Tony Romo, Eli Manning and Ben Roethlisberger) carry higher 2014 salary cap numbers than Bradford.

St. Louis has three options at its disposal for how to approach the Bradford dilemma: The team can play out the quarterback’s current contract (or just the 2014 year and then head back to the drawing board next offseason), they can look to reduce Bradford’s 2014 salary cap number by signing him to an extension, or the Rams can part ways with their starting quarterback entirely by releasing him.

Few, if any, would argue that Bradford is currently worth a cap hit of $17.610 million in 2014. In four NFL campaigns, the former Heisman Trophy winner has posted a career record of just 18-30-1 with a passer rating of 79.3 and completion percentage of 58.6 percent. Further denting the signal-caller’s resume is the fact that he missed six games in 2011 with an ankle injury and nine games this past season with a torn ACL. Bradford has never led the Rams to the postseason and has never earned an invite to Hawaii for the Pro Bowl. 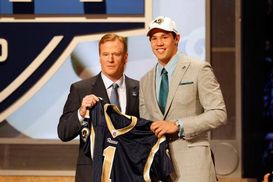 Bradford's four NFL seasons have produced results far below what St. Louis was hoping for.

But the mediocre statistics and lack of playoff appearances aren’t entirely Bradford’s fault. He’s played under two different head coaches in four years and been surrounded by marginal or inexperienced talent during his entire professional tenure. In fact, through seven games in 2013, Bradford was on pace to set career-best marks in completion percentage, passing yards, touchdowns and interceptions, had he not suffered a season-ending knee injury against the Carolina Panthers on October 20. That’s a sign of progress under head coach Jeff Fisher and, if nothing else, could provide reason enough to dissuade the Rams from cutting Bradford this offseason.

But complicating matters for the Rams is the fact that the team currently has just over $600,000 of available cap space for the 2014 season, which ranks the franchise in the bottom-six in the NFL. If St. Louis wants to make a splash during free agency come March 11, the team will need to free up some money, which leads to the option of extending Bradford in an effort to reduce his current cap number. But that means the team would be hitching its wagon to Bradford for the foreseeable future which, based on his four-year production mentioned above, could give the St. Louis front office reason for pause. After all, if Bradford can’t stay healthy or fails to take a step forward in his development, it would set a franchise that hasn’t recorded a winning season since 2003 back once again.

A more likely scenario would instead have the Rams attempting to restructure the contract of 27-year-old linebacker James Laurinaitis, who carries a salary cap hit of $10.4 million in 2014. Laurinaitis has four years left on his current deal as opposed to Bradford’s two. In addition, Laurinaitis’ contract carries bonus proration in the amount of just $400,000 in each of the next three years, while Bradford’s bonus proration is in the amount of $3.95 million for each of his final two years.

In possession of two draft picks within the first 13 selections of the first round (Nos. 2 and 13), St. Louis could opt to address the quarterback position come May. But cutting Bradford before the draft would alert quarterback-needy teams as to the Rams’ possible play at No. 2, which could then lead to a trade with Houston at No. 1, quite possibly preventing St. Louis from landing their desired target. Selecting a quarterback and then dumping Bradford after the draft would cost the Rams valuable cap space during March’s free agent period. This St. Louis front office has demonstrated in the past a willingness to trade down in an effort to stockpile more selections. The best possible way to make that happen in 2014 would be to keep the rest of the league guessing as to the team’s draft intentions.

This is a tricky situation for the Rams which will require a bit of projecting in regards to Bradford’s future potential. Our prediction is that St. Louis opts against a contract extension and instead gives Bradford one more season to demonstrate that he’s a franchise quarterback capable of leading St. Louis to the playoffs. If the four-year veteran fails to make any progress in 2014, the Rams can cut ties next offseason and resume their search for a viable starting signal-caller.