The tip of the iceberg

Friday marks a major holiday for the Las Vegas sports betting community as the Golden Nugget Hotel & Casino is scheduled to release their 2013 college football Game of the Year lines. Below you’ll find a sneak preview of ten marquee matchups that made this year’s offering of 250 total games.

The Golden Nugget’s annual college football release party has been taking place since 2006. Bettors are permitted to wager up to $1,000 per play with a maximum of three bets before they must venture to the back of the line.

We’ll have the complete rundown for you in the very near future, but for now, here are ten showdowns to ponder as we continue to creep our way towards the start of the season.

Early leans: ALABAMA (-17) vs. Virginia Tech, TEXAS A&M (+6) vs. Alabama, LSU/Alabama UNDER (39.5). This last play has been particularly good to us in recent years. In the last four meetings between the Tigers and Crimson Tide, the under is 4-0 with an average of 29.75 points per game scored against an average total of approximately 41. 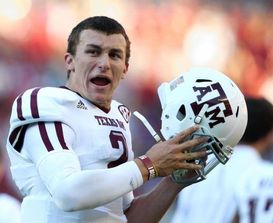 Heisman Trophy winner Johnny Manziel and the Aggies open as 6-point home underdogs for their September tilt with Alabama.