This is your moment

His Hall of Fame resume is inundated with triumphs spanning a 13-year career that will go down as one of the greatest of all time. He’s won three Super Bowls, two Super Bowl MVP awards and on two occasions has been named the league’s most valuable player. The 50 touchdown passes he threw during a perfect 16-0 regular season campaign back in 2007 stands as an NFL record.

Brady’s counterpart on Sunday boasts an impressive resume in his own right, but the document is devoid of the big-ticket accomplishments required to share the rarefied air currently occupied by the New England signal-caller. He’s the only quarterback to win a playoff game in each of his first five seasons in the league. Sunday marks his third appearance in the AFC Championship game, tying him with Peyton Manning.

Sunday afternoon in Foxborough will mark the sixth time that Tom Brady and Joe Flacco have gone head to head. Brady’s won three while Flacco has come out on top twice. But Brady has the marquee triumph of the series, which came in the form of a 23-20 escape-job victory in last year’s conference title game. The Patriots went on to the Big Show. The Ravens went home to lick their wounds.

We’ve seen this story play out before our eyes in the past, but I’m not referring to last year’s AFC Championship game. This is a story about a man looking to climb higher after he’s already reached the summit, while another man looks to emerge from the shadows. It’s about the top dog in the business trying to keep the worthy adversary at bay. 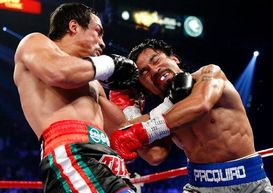 Pacquiao—the first eight-division world champion in boxing history—stood atop Mount Everest with a 54-4-2 record. He had achieved everything the sport had allowed, save for a victory over a ducking Floyd Mayweather Jr. He wasn’t perfect, but he didn’t need to be. Much like Tom Brady, Pacquiao’s legacy had already been cemented. He’s a Hall of Famer and one of the greatest who ever lived.

Juan Manuel Marquez lived in the shadows. One of the toughest men to ever don the gloves, the Mexican fighter who never backed up boasted a resume with 39 knockouts that helped comprise a 54-6-1 overall record. But it wasn’t enough. Winless in three attempts against the Filipino fighter, Marquez was merely a boxer who complemented a title fight rather than headlined it. He needed his big moment in the sun. He needed to beat Manny Pacquiao.

At 39 years of age, Marquez got his final shot to exorcise the demons and alter history. The date was December 8, 2012. The location was the MGM Grand in Las Vegas. In a slugfest for the ages that was scheduled for 12 rounds, Marquez finally reached the summit in the waning seconds of the sixth round with the knockout to end all knockouts.

Marquez had finally beaten Pacquiao. The judges weren’t needed to influence or botch the outcome. The Mexican fighter’s moment in the sun had finally arrived.

Sunday’s game in New England isn’t about Joe Flacco asserting himself as a better quarterback than Tom Brady, just like Pacquiao-Marquez IV wasn’t about Marquez convincing the world he is a better fighter than Pacquiao. It’s about stepping away from the shadows, conquering the opportunity on the big stage and showing the world that you belong. Much like Marquez, Flacco has sat by and watched as quarterbacks like Aaron Rodgers and Eli Manning have emerged from the middle of the pack to claim what was rightfully theirs.

This is the opportunity for which Joe Flacco has been waiting. It’s the chance to lead the Baltimore Ravens to the Super Bowl while simultaneously knocking the best in the business from his perch. Flacco wants us to believe that he really is an elite quarterback who belongs in the spotlight? Sunday is the time to show it.

Marquez already seized his moment. Can Joe Flacco seize his?