Trade deadlines are fast approaching and for those of you who don’t rank as one of the top-3 highest scoring teams in your league, a slight roster overhaul may be in order.

We recently took a look at the upcoming schedules for all 32 teams in the National Football League with an eye toward fantasy points surrendered at each position. With that information in hand, here are 18 players we’ve targeted as either buy or sell candidates.

Eli Manning, New York Giants: It’s been a tough year for the two-time Super Bowl winner, to say the least, as Manning currently ranks 31st in the NFL in passer rating (68.4), which is one spot above Brandon Weeden and one below Geno Smith. But the Giants come off the bye riding a two-game winning streak, are still alive in the hunt for the NFC East and have an extremely quarterback-friendly schedule on the immediate horizon. Over the next five weeks, Manning will face five defenses that rank in the top-12 in most fantasy points allowed to opposing quarterbacks this season, with four of those teams (Oakland, Dallas, Washington, San Diego) ranking within the top-9.

Case Keenum, Houston Texans: Cemented himself as the top dog in Houston with a 350-yard, three-touchdown effort against the Indianapolis Colts last Sunday night. The beautiful thing when it comes to Keenum is that in most leagues, you don’t even need to trade for him, as the former Houston Cougar standout is widely available on waivers. Keenum’s next six matchups (at Arizona, vs. Oakland, vs. Jacksonville, vs. New England, at Jacksonville, at Indianapolis) fail to feature a single opponent who ranks in the top-10 in fewest fantasy points allowed to opposing quarterbacks this season.

ICONForte is set to make his move to the top of the fantasy running back heap.

Matt Forte, Chicago Bears: Currently ranks second in fantasy scoring at the running back position (standard scoring formats), so it won’t be easy to wrestle Forte away from his current owner. But following back-to-back physical encounters with the Detroit Lions and Baltimore Ravens, Forte enters a three-game stretch of matchups (at St. Louis, at Minnesota, vs. Dallas) against defenses that currently rank in the top-9 in most fantasy points allowed to opposing running backs this season. Based on his production to date in head coach Marc Trestman’s system (4.7 YPC, 7 TDs), don’t be surprised if Forte makes a serious push for 2013’s highest scoring fantasy back.

C.J. Spiller, RB, Buffalo Bills: If you’re looking to exploit an inefficiency in the market, targeting Spiller would be a great first step. Any owner who spent a top-5 pick on a guy who has amassed just one touchdown on the season while battling injuries has got to be frustrated at the moment. So take advantage of that negative perception by swinging a deal for the former Clemson standout. Week 10 marks the first time in months that Spiller has not been listed on the injury report and Buffalo head coach Doug Marrone said the team plans to get Spiller much more involved in the offense moving forward. Look no further than this Sunday’s matchup with a Pittsburgh defense that is currently surrendering an average of 21.8 fantasy points per game to opposing running backs this season (sixth-most in NFL) for signs of life from Spiller.

Eddie Lacy, Green Bay Packers: Currently ranks eighth in the NFL in rushing yards (596) and is about to enter a six-game stretch that fails to feature a single defense that ranks in the top-10 in fewest fantasy points allowed to opposing running backs this season. With Pro Bowl quarterback Aaron Rodgers out of action, look for the Packers to lean on the ground game more now than ever before. Lacy’s upcoming schedule includes showdowns with Philadelphia, the New York Giants, Minnesota, Detroit, Atlanta and Dallas.

Pierre Garcon, Washington Redskins: Won’t be easy to acquire following his seven-reception, 172-yard effort against the Chargers in Week 9, but note in negotiations that Garcon has found the end zone only twice this season and hadn’t eclipsed 75 receiving yards in any of the five games prior to last Sunday’s explosion. Garcon’s next six games feature only one opponent (vs. San Francisco) that ranks in the top-10 in fewest fantasy points allowed to opposing wide receivers this season.

Jordy Nelson & James Jones, Green Bay Packers: The injury to quarterback Aaron Rodgers no doubt has Nelson and Jones owners fretting over the Green Bay wide receivers. That’s good news for potential buyers, as it means Nelson and Jones owners would be more inclined to make a deal under the assumption that both players are headed for a nosedive in the statistics department. Take advantage of this feeling knowing that Green Bay embarks on a six-game stretch this week that features matchups with some of the worst pass defenses in the league (vs. Philadelphia, at NY Giants, vs. Minnesota, at Detroit, vs. Atlanta, at Dallas).

Dwayne Bowe, Kansas City Chiefs: Can be had for next to nothing thanks to a 2013 stat line that reads 33-369-2. And while Kansas City’s offense has yet to demonstrate an ability to go nuclear on the opposition, Bowe has one of the most favorable wide receiver schedules in the league coming up, which features five straight showdowns against teams who rank in the top-10 in most fantasy points allowed to opposing wide receivers this season (Denver twice, San Diego, Washington, Oakland). 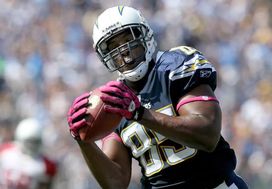 The savvy veteran has several favorable matchups over the next six weeks.

Antonio Gates, San Diego Chargers: Has failed to find the end zone in each of his last four starts and is averaging just 68.75 receiving yards per game in 2013. All that being said, Gates is headed for a six-matchup stretch that features four games against defenses that rank in the top-9 in most fantasy points allowed to opposing tight ends this season (Denver twice, Miami, New York Giants). However, note that in Weeks 12 and 13, the 11-year veteran faces two defensive units (Kansas City, Cincinnati) that rank in the top-seven in fewest fantasy points allowed to opposing TEs this season.

SET TO HIT THE WALL

Andrew Luck, Indianapolis Colts: Has made big strides from Year 1 to Year 2, but Luck is still completing only 58.3% of his passes on the season and no longer has Pro Bowl wide receiver Reggie Wayne at his disposal. Also worth noting is that five of Luck’s next six opponents (St. Louis, Tennessee twice, Cincinnati, Houston) each rank within the top-11 in fewest fantasy points allowed to opposing quarterbacks this season. The lone dissenter comes by way of a Week 12 matchup against Arizona, who is surrendering an average of 20.6 fantasy points per game to opposing signal-callers this season (15th-most in NFL).

Cam Newton, Carolina Panthers: An upcoming schedule that includes showdowns with San Francisco, New England and New Orleans will show the world whether or not the Panthers truly belong in the “contender” conversation. Newton’s Week 13 matchup with Tampa Bay looks awfully tasty, but that game is sandwiched in between four outings (San Fran, New England, Miami, New Orleans) with defenses that rank in the top-12 in fewest fantasy points allowed to opposing quarterbacks this season. The stock value of wide receiver Steve Smith should also take a hit during this upcoming run.

Chris Johnson, Tennessee Titans: Johnson owners were no doubt frustrated as hell entering Week 9, as the Titans starting running back was averaging less than 4.0 yards per carry on the season with exactly zero rushing touchdowns. But Johnson erupted against the Rams to the tune of a season-high 150 rushing yards and two scores, elevating his stock to its highest point all season. If you’re looking to deal Johnson you have two options: Move him now in the wake of last Sunday’s monster performance, or roll the dice on this guy’s ability to shred the Jacksonville Jaguars this weekend and then pull the trigger. Because after Sunday, CJ2K enters a five-game stretch that features three matchups against teams that rank in the top-4 in fewest fantasy points allowed to opposing running backs this season (Indianapolis twice, Arizona).

Moreno has been a pleasant surprise this season, but his upcoming schedule is rife with pitfalls.

Knowshon Moreno, Denver Broncos: You’re selling points are the facts that Moreno currently ranks sixth among running backs in fantasy scoring this season and plays on the high-powered Denver Broncos offense. What you’ll keep to yourself are the facts that he’s yet to rush for 100 yards on the season and has amassed more than 15 carries in game just once in 2013. Also of concern is the upcoming schedule, which features four matchups in a six-game stretch against defenses that rank in the top-10 in fewest fantasy points allowed to opposing running backs this season (San Diego twice, Kansas City twice).

Giovani Bernard, Cincinnati Bengals: Experienced a surge in stock price following a 104-yard, two-touchdown effort against the Dolphins in Week 9 that included one of the sickest touchdown runs of the season. But the rookie from UNC is battling a rib injury, has carried the ball more than ten times in a game just twice this season and is still competing with veteran BenJarvus Green-Ellis for red zone touches. Cincy’s next four games (at Baltimore, vs. Cleveland, at San Diego, vs. Indianapolis) offer little room for high-scoring performances.

T.Y. Hilton, Indianapolis Colts: Will continue to see an influx of targets thanks to the season-ending injury sustained by Pro Bowl wideout Reggie Wayne, but Hilton’s upcoming schedule is absolutely brutal. Over the next six weeks, the second-year wideout will encounter five defenses (Tennessee twice, Arizona, Cincinnati, Houston) that all rank within the top-12 in fewest fantasy points allowed to opposing wide receivers this season.

New England Patriots wide receivers: Rookie Aaron Dobson is heating up, but with the return of tight end Rob Gronkowski to the starting lineup, there are just too many players competing for Tom Brady’s targets. In addition, the Patriots will play four of their next five games against teams who rank in the top-10 in fewest fantasy points allowed to opposing wide receivers this season (Carolina, Houston, Cleveland, Miami).

Julius Thomas, Denver Broncos: Considering that he plays with future Hall of Famer Peyton Manning, it’s understandable if any current Thomas owners would be unwilling to part with the third-year tight end. Just be advised that no TE in the league will face a more daunting schedule over the next six weeks than Thomas, who will challenge five teams that rank within the top-9 in fewest fantasy points allowed to opposing tight ends this season (San Diego twice, Kansas City twice, New England).