Tuck says Kiwanuka is coming back

When healthy, defensive end Mathias Kiwanuka brings a pretty lethal pass rush to the table. Unfortunately, the 28-year-old had trouble staying on the field last season due to a neck injury. 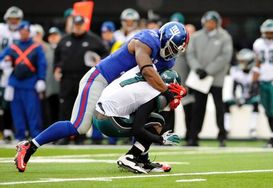 The good news for Giants fans is that if Kiwanuka can regain the eight-sack form he flashed back in 2008 this season, he’ll be doing so in a Big Blue uniform.

Kiwanuka will be coming back to a defense that already boasts one of the deepest and most talented lines in the league featuring Tuck, Osi Umenyiora and Jason Pierre-Paul.

With divisional rivals like Michael Vick and Tony Romo, that’s a key weapon to possess.