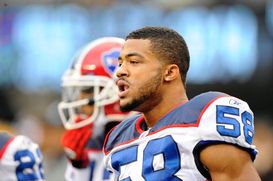 ICONMaybin will have a chance to rebuild his career in New York.

Per Manish Mehta of the New York Daily News, the 23-year-old former first-round draft pick has decided to sign with the New York Jets. While the financial particulars of the deal have not yet been announced, Mehta tweeted on Tuesday that the Jets had offered Maybin a one-year contract.

So after ridding themselves of one first-round bust in 2008 draft pick Vernon Gholston, Rex Ryan and the Jets will now attempt to turn around the career of a player who was a major disappointment in his two seasons in Buffalo.