Nick Saban’s Alabama Crimson Tide (5/1) regained the top spot on the odds board at the Westgate Las Vegas SuperBook last week following the team’s 42-21 destruction of Florida and maintained that position despite a bye this past weekend. But this coming Saturday could bring a big change to the landscape of the college football futures market if the undefeated, 11th-ranked Mississippi Rebels find a way to shock the world.

Off to the school’s first 4-0 start since 1970, Ole Miss now sits at 25/1 (12th-best) to win the BCS championship following victories over Boise State, Vanderbilt, Louisiana-Lafayette and Memphis, respectively. But Saturday’s showdown with a well-rested Alabama squad presents an entirely different challenge altogether. The Crimson Tide opened as a 5-point favorite for their Week 6 date with the Rebels, but that number has already been bet up as high as -6.5, per the odds board at SBRodds.com.

We’ll be backing Alabama at less than a touchdown on Saturday, but more on that later in the week. For now, here are some of the notable adjustments that took place to the college football futures market following this past weekend’s slate of action.

Look out for undefeated TCU, who is now 50/1 heading into Saturday’s monstrous home showdown with #4 Oklahoma (6/1). The Sooners opened as a 5-point favorite, but that number was quickly bet down to -4.5. 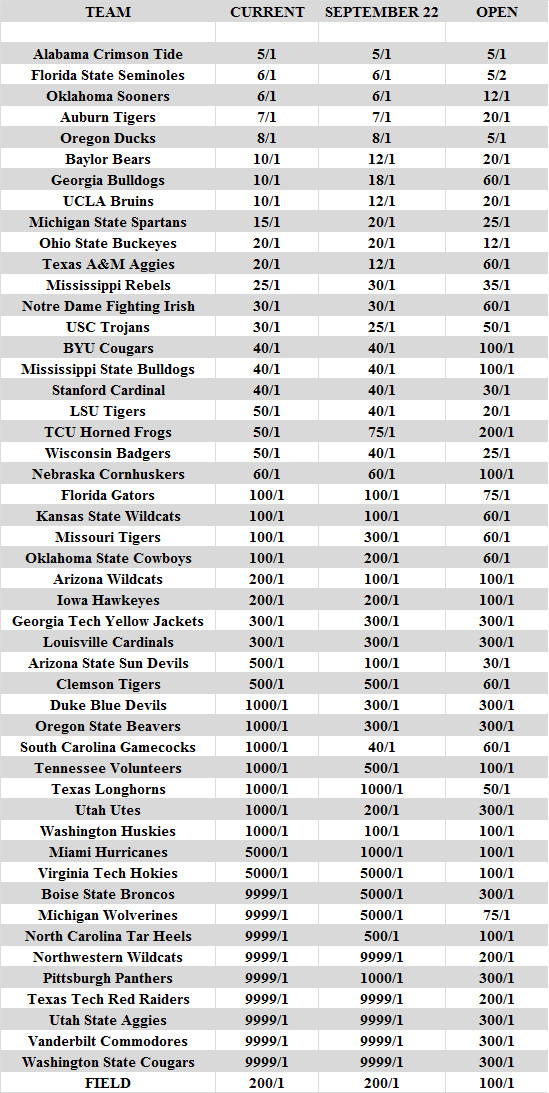