Barring a serious injury or lengthy suspension to a marquee player, or a tidal wave of money in support of a specific team, the updated 2015 Super Bowl odds released by the LVH sports book in Las Vegas on Monday should remain relatively steady until the start of the season.

But that doesn’t mean these numbers have stood firm since hitting the board for the first time back on January 14. While the favorites from four months ago remain the favorites today, several teams have experienced noteworthy swings thanks to a variety of factors ranging from free agency to the draft.

The Arizona Cardinals—a 25/1 shot back in January—are now listed at 50/1, while the reigning NFC South champion Carolina Panthers slipped from 20/1 to 30/1. But the team that really jumps off the page at us is Lovie Smith’s new-look Tampa Bay Buccaneers, who have shifted from an opening price of 40/1 to fourth-worst in the league at 75/1.

Defensively, the Bucs parted ways with cornerback Darrelle Revis, but bulked-up the team’s front four with the addition of pass-rushing specialist Michael Johnson, whose presence should help to minimize the amount of double-teams defensive tackle Gerald McCoy will experience in 2014. In addition, Tampa Bay drafted 6-5 Texas A&M wide receiver Mike Evans and 6-5 Washington tight end Austin Seferian-Jenkins to pair up with 6-5 veteran wideout Vincent Jackson, giving Tampa Bay one of the biggest and most physical pass-catching units in the league.

Lovie knows defense. And at a current price of 75/1, the Buccaneers stand out as one of the best value plays on the board in this writer’s opinion. 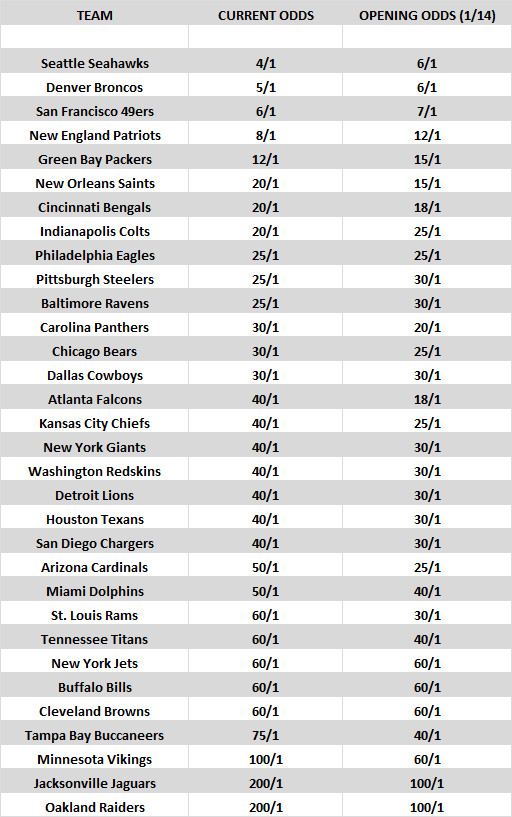