The preseason favorite to win the Super Bowl, Jim Harbaugh’s San Francisco 49ers apparently haven’t done anything over the first eight weeks of the season to cajole bettors into jumping ship in an effort to find another horse to back in this six-month race.

As it stands at the LVH Superbook at the moment, the 49ers are still your 4-1 favorite to hoist the Vince Lombardi Trophy come February. However, that sentiment isn’t being echoed around the offshore shops, as online sports books 5Dimes, CRIS and BetOnline all have the 6-1 Houston Texans posted as their current Super Bowl favorite.

We’ve broken down the odds for all 32 NFL teams in an attempt to scour the market for the best value. For example, the LVH here in Las Vegas offers the best prices on playoff contenders Denver and Atlanta (among others), while the best odds for Green Bay Packers supporters can be found at 5Dimes.

And if you think those Philadelphia Eagles have any chance of turning their current mess of a season around, now’s the time to strike, as Philadelphia can be found posted as high as 100-1 at the current moment. 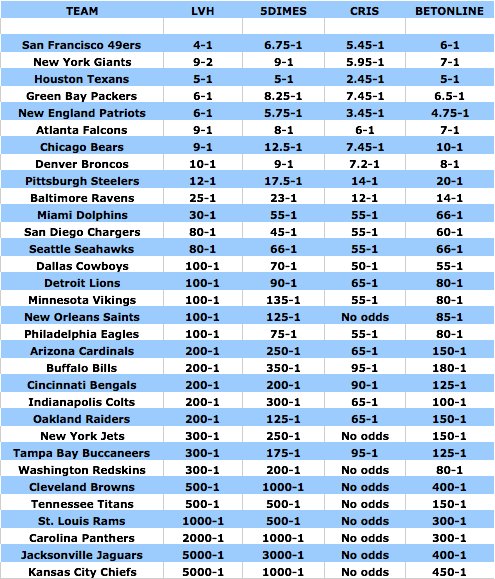