Rashad Jennings, RB, Oakland Raiders (at NY Giants, owned in 12% of Yahoo! leagues): Rushed for 102 yards and a touchdown on 15 carries (6.8 YPC) Sunday against Philadelphia while filling in for an injured Darren McFadden (hamstring). DMC’s hamstring injury is in the same spot as the one he sustained in a Week 4 loss to Washington, so we don’t expect to see him on the field Sunday at New York.</p>

Case Keenum, QB, Houston Texans (at Arizona, owned in 12% of Yahoo! leagues): Torched the Indianapolis secondary for 350 yards and three scores Sunday night while firmly cementing himself as the starting quarterback in Houston. Is currently averaging a ridiculous 10.53 yards per attempt through two starts.

Aaron Dobson, WR, New England Patriots (Bye, owned in 37% of Yahoo! leagues): Is averaging 7.75 targets per game over his last four starts, has found the end zone three times over his last two games and is coming off a career-high 130-yard effort against the Pittsburgh Steelers. New England has spent the last few years looking for a vertical outside receiver to replace Randy Moss and it looks like they may have found him in Dobson.

Chris Ivory, RB, New York Jets (Bye, owned in 46% of Yahoo! leagues): Has carried the ball 58 times over his last three starts which has resulted in two 100+ yard efforts. Take note that Ivory has only found the end zone one time via the ground this season, so consider the former New Orleans Saint an RB3/flex position player.

Nick Foles, QB, Philadelphia Eagles (at Green Bay, owned in 28% of Yahoo! leagues): Head coach Chip Kelly has yet to commit to Foles as Philadelphia’s starter for the remainder of the season, but after Sunday’s seven-touchdown outing against the Raiders, we feel the job is his to lose. If you throw out the lousy effort against the Cowboys in Week 8, Foles has gone 2-0 as the Eagles starter, with 702 passing yards, ten touchdowns and zero interceptions.

Jonathan Stewart, RB, Carolina Panthers (at San Francisco, owned in 18% of Yahoo! leagues): Made his first appearance of the season on Sunday against the Falcons, notching a team-high 43 yards on nine attempts (4.8 YPC average). As Stewart rounds into football shape, look for Ron Rivera and the Panthers to get him more involved in the offense. However, note that Sunday’s matchup at San Francisco is an obvious sit situation when it comes to start/sit analysis. 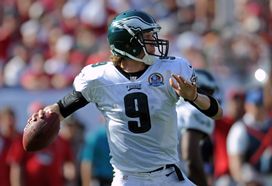 US PRESSWIREFoles is coming off a historic seven-TD performance against the Oakland Raiders.

Lance Moore, WR, New Orleans Saints (vs. Dallas, owned in 47% of Yahoo! leagues): Has recorded nine receptions for 104 yards and a touchdown on 14 targets since returning from injury in Week 8. With Marques Colston and Jimmy Graham operating at less than 100%, expect Moore to function as one of quarterback Drew Brees’ top receiving options. Consider him a WR3 moving forward.

Andre Brown, RB, New York Giants (vs. Oakland, owned in 37% of Yahoo! leagues): Will make his 2013 debut Sunday against Oakland and will have every opportunity to seize control of the starting job for a Giants team that has been piss poor running the football this season. May see limited carries in Week 10 as a precaution, but the upside here makes Brown well worth the investment.

Jason Campbell, QB, Cleveland Browns (Bye, owned in 10% of Yahoo! leagues): Don’t look now, but Campbell’s actually been playing some half decent football since being named starting quarterback of the Cleveland Browns. Over the last two weeks, the journeyman signal-caller is completing 63.4% of his passes for 555 yards with five touchdown tosses and zero interceptions. The upside here is relatively limited, but Campbell makes for a respectable QB2 in leagues with 12 or more teams.

Doug Baldwin, WR, Seattle Seahawks (at Atlanta, owned in 12% of Yahoo! leagues): His stock will take a hit once Percy Harvin finally makes it onto the field, but with Sidney Rice out of action, Baldwin stepped up and caught six passes for 75 yards and a touchdown on a season-high ten targets Sunday against the Buccaneers. If Harvin fails to suit up for Sunday’s game at Atlanta, don’t be surprised if Baldwin posts another solid stat line in relief.

Mike James, RB, Tampa Bay Buccaneers (vs. Miami, owned in 49% of Yahoo! leagues): Carried the football a staggering 28 times for a career-high 158 yards Sunday at Seattle and is one of the few starting running backs still available on the waiver wire. Second-year back Doug Martin is still scheduled to return at some point this season, but until he does, James makes for a decent RB3/flex option.

Zach Ertz, TE, Philadelphia Eagles (at Green Bay, owned in 2% of Yahoo! leagues): Scored his first career touchdown Sunday at Oakland and has seen an increase in both snaps and targets over the last four weeks. Recommended only for owners in leagues with more than 12 teams.

Kendall Wright, WR, Tennessee Titans (vs. Jacksonville, owned in 51% of Yahoo! leagues): Is averaging a healthy 8.42 targets per game over his last seven contests and has topped 65 receiving yards in each of his last four starts. Note that Wright hasn’t found the end zone since Week 2, but as the No. 1 receiver in Tennessee, he’s worthy of a roster spot with consideration as a WR3 from week to week.

Seneca Wallace, QB, Green Bay Packers (vs. Philadelphia, owned in 1% of Yahoo! leagues): Will be one of the top waiver wire targets this week thanks to a shoulder injury sustained by Aaron Rodgers in Green Bay’s Monday night loss to Chicago. Current reports have Rodgers scheduled to miss the next three games, which would give Wallace the opportunity to roll up points against the defenses from Philadelphia, New York (Giants) and Minnesota.

Riley Cooper, WR, Philadelphia Eagles (at Green Bay, owned in 13% of Yahoo! leagues): With Nick Foles as the starting quarterback against Tampa Bay and Oakland, Cooper came out of nowhere to catch nine passes for 259 yards and four touchdowns. These two definitely have a chemistry that is worth monitoring for the rest of the season.

Tennessee Titans, D/ST (vs. Jacksonville, owned in 63% of Yahoo! leagues): Plays host to a Jacksonville Jaguars offense on Sunday that will be without wide receiver Justin Blackmon (suspended) and is averaging a pathetic 10.8 points and 286.5 total yards per game this season.

Indianapolis Colts, D/ST (vs. St. Louis, owned in 55% of Yahoo! leagues): Plays host to a Kellen Clemens-led Rams offense that is averaging just 15.0 points per game since starter Sam Bradford went down with a season-ending knee injury.

Tampa Bay Buccaneers, D/ST (vs. Miami, owned in 24% of Yahoo! leagues): A true roll of the dice considering how dysfunctional this organization has proven to be in 2013, but with another dysfunctional franchise in Miami coming to town on Monday night, we think this is a calculated gamble worth making.