Marcel Reece, RB, Oakland Raiders: With Darren McFadden and Mike Goodson both suffering from high ankle sprains, it’s “next man up” in Oakland. Reece didn’t handle any of the workload in Oakland’s loss to Tampa on Sunday, but he was targeted nine times, which resulted in eight receptions for 95 yards and a score. Expect the four-year veteran to handle the bulk of the workload until Run DMC and/or Goodson get healthy.

Taiwan Jones, RB, Oakland Raiders: Reece is the priority, but for those of you who play in deeper leagues, Jones is worth a look as well. The two-year veteran will be used primarily on passing downs and to spell Reece, but he should see a decent amount of action moving forward.

Ryan Tannehill, QB, Miami Dolphins: In a pinch at the QB position for Week 10? Why not give Tannehill a look, as the former Texas A&M standout takes on a Tennessee Titans defense that is surrendering an average of 23.5 fantasy points per game to opposing quarterbacks this season (fourth-most in NFL).

Danny Amendola, WR, St. Louis Rams: Did his previous owner make a hasty decision and drop Amendola following the clavicle injury he sustained at the beginning of October? If that’s the case, now is the time to strike as Amendola is expected to return to the starting lineup this Sunday against the San Francisco 49ers. In just five starts this season, the former four-year veteran has been targeted an impressive 49 times.

T.Y. Hilton, WR, Indianapolis Colts: Hilton has caught 11 passes over his last two starts and is coming off a career-high 11-target game against the Dolphins that resulted in six grabs for 102 yards and a score. Quarterback Andrew Luck raved about Hilton’s performance following the Colts’ Week 9 win, which is a very encouraging endorsement from the guy responsible for getting him the football. 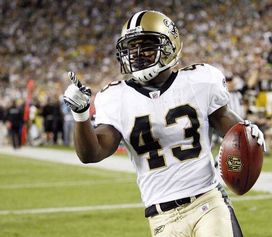 With Darren Sproles (above) on the sidelines, look for Chris Ivory to play a bigger role in the New Orleans offense.

Chris Ivory, RB, New Orleans Saints: In his first action of the season, Ivory stepped up and carried the rock ten times for 48 yards and a touchdown in the Saints’ win over Philadelphia on Monday night. His long-term value is minimal, but as long as Darren Sproles is on the sidelines nursing an injury, Ivory will continue to get the opportunity to produce.

Greg Olsen, TE, Carolina Panthers: Olsen caught five passes for 48 yards on nine targets in Sunday’s win at Washington, but more importantly, he’s got a Week 10 showdown with a Denver Broncos defense that is currently surrendering an average of 10.9 fantasy points per game to opposing tight ends (third-most in NFL). If you’re in need of an upgrade for this Sunday, Olsen makes for a suitable replacement.

Jake Locker, QB, Tennessee Titans: Locker has been out of action since the end of September, but with the way the Tennessee offense has looked as of late, the second year quarterback should be back in the starting lineup when he’s ready to play. The good news for fantasy owners in need of some quarterback help is that Locker could be back in action as early as this Sunday, when the Titans travel to Miami to play the Dolphins.

Danario Alexander, WR, San Diego Chargers: Alexander caught three passes for 61 yards in last Thursday’s win over Kansas City and in the process looks to have earned himself some more playing time. The Bolts travel to Tampa Bay this weekend to face a Buccaneers team that is currently giving up an average of 28.3 fantasy points per game to opposing wideouts this season (third-most in NFL).

Donald Jones, WR, Buffalo Bills: Jones amassed season highs in targets (9) and receptions (6) in Sunday’s loss at Houston and could become a more integral component in Buffalo’s offense now that No. 1 wide receiver Stevie Johnson is battling a thigh injury. However, take note that Johnson is expected to play in Week 10.

Anthony Fasano, TE, Miami Dolphins: Fasano won’t serve as a long-term solution to any of your problems, but he currently ranks third in receptions (24) on the Miami roster and has a very favorable Week 10 showdown against a Titans defense that is surrendering an average of 11.3 fantasy points per game to opposing tight ends this season (second-most in NFL).

Kevin Ogletree, WR, Dallas Cowboys: With Dez Bryant banged up, Ogletree once again assumed a bigger role in the Dallas offense, catching three passes for 96 yards and a score in Sunday night’s loss at Atlanta. This guy makes for a good WR4/5 on your roster with serious upside if Bryant is limited or can’t play at all.

St. Louis Rams, D/ST: Coming off the bye week, St. Louis heads to San Francisco for a divisional showdown against a Niners offense that is averaging 23.6 points per game (14th in NFL). This isn’t the best matchup on the board, but with Vegas totaling this game at just 38.5 points, it’s clear the bookmakers are anticipating a low-scoring affair.

Dallas Cowboys, D/ST: It’s unlikely this unit is still floating around on waivers, but if they are, make a move and insert the Cowboys into your starting lineup for Week 10. Why? Because the Philadelphia Eagles can’t block and currently rank 29th in the NFL in scoring offense (16.6 pts/gm).