Changing venues and moving to the MGM Grand last Saturday did nothing to halt this nauseating cold streak I’m currently riding, so this weekend we’re rolling down to the Venetian/Palazzo for a taste of fresh casino air. If you’re in the neighborhood, stop by to enjoy a cold sweat with me.

Analysis: Ball State snapped a five-game losing streak on October 18 with a 32-29 win at Central Michigan that preceded a 35-21 home victory over Akron on October 25. So things are looking up for the Cardinals, right? Not so fast. Take note that in those two aforementioned victories, Ball State was a staggering +9 in the turnover battle, committing just one while forcing ten. Northern Illinois is a disciplined football team that has committed just five total turnovers on the season, with no more than one coming in any of the Huskies’ eight games played in 2014. In addition, take note that Ball State is just 1-4 ATS over its last five home games while Northern Illinois is 7-2 ATS over its last nine road contests.

Analysis: We need one more Wolfpack win to cash our season win totals bet on North Carolina State (over 5.5), but think that happens next week against Wake Forest rather than this Saturday against Georgia Tech. After opening the season 5-0, the Yellow Jackets dropped two straight (vs. Duke, at North Carolina) before putting together back-to-back victories against Pittsburgh and Virginia. But the big reason we side with Georgia Tech in this spot is because of what we saw out of N.C. State the last time the team was asked to defend the triple option. That instance came in the season-opener against Georgia Southern where the Wolfpack surrendered 246 rushing yards and fell behind 17-3 at halftime before a furious rally resulted in a 24-23 come-from-behind win. Georgia Southern is not Georgia Tech and it’s also important to note here that North Carolina State is averaging just 14.0 points per game over its last four outings. Lastly, be advised that Tech is 5-0-1 ATS over its last six trips to Raleigh.

Analysis: Two teams headed in opposite directions here as Tulane has dropped four of its last five outings while Houston has won four of its last five contests and is now 5-1 ATS over its last six games overall. The Green Wave are a young, mistake-prone football team that is averaging 2.0 turnovers per game this season, which is alarming when you consider the fact that Houston is forcing an average of 3.0 turnovers per contest. Note that Tulane is 1-4 ATS over its last four road games and a staggering 1-10 ATS over its last 11 meetings with Houston, while the Cougars are 20-7 ATS over their last 27 contests against teams with a losing record.

Notable trends: Tulane is 0-5 ATS over its last five road games at Houston. 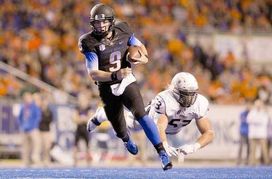 Broncos quarterback Grant Hedrick is completing 72.5 percent of his passes this season.

Analysis: Upon a quick initial inspection of this matchup, the first thing you may notice is that New Mexico is 3-0 ATS over its last three meetings with Boise State. This is true. However, dig a little further and you’ll discover that the Broncos outscored the Lobos 122-46 in those showdowns, but failed to cover the number because they were a favorite in all three contests by an average of 37.16 points per game. Laying 17.5 this Saturday is a much less daunting number to cover for a Boise State squad that is averaging 47.6 points per game over its last three outings.

Analysis: The Ducks have been on cruise control since suffering a 31-24 home defeat to the Arizona Wildcats on October 2 with wins over UCLA, Washington, California and Stanford. On the other side of the field sits a wildly underrated Utah squad that just fell 19-16 at Arizona State last weekend, but will have the benefit of a rocking home crowd for this Saturday night’s clash with Oregon. Note that for as solid as the Ducks have been over the last month, Oregon has played only two road games this season (Washington State, UCLA), winning both by an average of just 9.5 points per contest. Additionally, it’s worth keeping in mind that Utah is 4-0 ATS over its last four conference games, 8-3 ATS over its last 11 home contests against teams with a winning road record and 4-0 ATS over its last four matchups overall.