If you’re looking for underdog picks, you may want to try another column. Because this week’s college football betting primer is chalk full of, um, chalk. 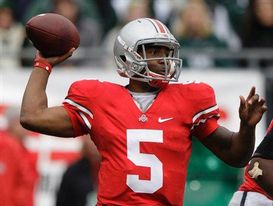 Braxton Miller and the Buckeyes look to put the finishing touches on an undefeated season.

Analysis: This is it for Ohio State. As a result of sanctions stemming from the scandal that rocked the university under former head coach Jim Tressel, the undefeated Buckeyes will play their 2012 finale before the calendar flips to December. Urban Meyer’s crew has covered the number in three straight games and is 11-4-1 ATS over their last 16 games played in the month of November. Meanwhile, Michigan has failed to cover the spread in three of their last five outings and is just 7-20-1 ATS over their last 28 games against teams with a winning record. This game is gargantuan for both schools, but based on the fact that it’s the end of the line for the Buckeyes with an undefeated season hanging in the balance, we’ll side with Ohio State.

Analysis: Originally left off this list, the Georgia-Georgia Tech game became a last-second entry after I read about the flu bug that has been circulating through the Yellow Jacket locker room. Maybe it’s nothing, maybe it’s something. Either way, Georgia has a chance to play for the National Championship and their in-state rivals will need to be at more than 100% if they want a chance to derail those hopes. I expect the Bulldogs to come out swinging.

Take note: Georgia Tech is 3-7-1 ATS over their last 11 games against Georgia.

Analysis: Boston College is 0-5 both straight-up and ATS on the road this season, while the Wolfpack have covered the number in three of their last four home contests. Eagles head coach Frank Spaziani is on his way out the door and while some would like to believe that his players will step up and deliver for their soon-to-be-fallen leader, we find it more likely that these guys phone in the game and start preparing for Christmas vacation. NC State is bowl-bound and looking to close the show on a high note. That’s good enough for us.

Take note: The home team is 7-0 ATS over the last seven meetings between these two schools. 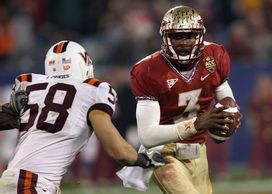 This writer is hoping for E.J. Manuel and the Seminoles to flop on Saturday.

Analysis: No nuts and bolts analysis here. I came up as a Gators fan, which means two things: I love this rivalry more than any other in college football and I hate the Seminoles with a passion. Give me Will Muschamp’s defense with a touchdown and the hook and I’ll let my fandom blind me for one afternoon.

Analysis: Missouri is looking to get bowl eligible while Texas A&M is jockeying for an invite into one of the four major postseason matchups. In addition, the Aggies would like nothing more than to showcase quarterback Johnny Manziel in an effort to improve the redshirt freshman’s chances of winning the Heisman Trophy. The Tigers had an excellent opportunity to clinch a bowl bid with a home win over Syracuse last week, but fell 31-27 as a six-point favorite. We see them getting run out of College Station on Saturday night.

Take note: Missouri is 5-1 ATS over their last six games at Texas A&M.

Analysis: The Tigers have won seven straight and are now 7-1 ATS over their last eight games overall. And despite the fact that the line is moving against us, we’re still backing Clemson in this primetime showdown against in-state rival South Carolina. The upside here is the fact that Clemson can’t get caught looking ahead to the ACC Championship game like they did last season, as Florida State has already wrapped up that side of the conference. Instead, the Tigers will be gunning for a chance to play in the Sugar Bowl.

Take note: The home team is 4-1 ATS in the last five meetings between these two schools.