Week 13 featured some of the most dramatic line movements we’ve seen this season, headlined by a Detroit Lions team that opened -4.5 at LVH in Las Vegas for their non-conference showdown with the Indianapolis Colts before closing as high as -7 before kickoff.

While this week’s slate of games has yet to incur as much movement, the early money has still forced a number of adjustments. Here’s a look at the most notable of swings.

Analysis: Philly has dropped six straight games and prior to Sunday night’s backdoor miracle, the Birds hadn’t covered a number since Week 5. But the early money supports Nick Foles and company for their Sunday tilt at Tampa against a Buccaneers team that is 5-0-1 against the spread over their last six outings. Maybe it has something to do with the fact that the Bucs are just 3-13 ATS in their last 16 home games against teams with a losing road record. Take note that Tampa Bay heads to New Orleans next week for their third divisional game in five weeks.

Analysis: The books moved off the key number of three rather quickly as the early action favored the home dog Jaguars. The quarterback situation in New York is relatively unstable at the current moment, as no official word has been given as to whether it will be Mark Sanchez or Greg McElroy under center come Sunday. On the flip side, the Jaguars have covered the spread in two of their last three outings since former Miami Dolphin Chad Henne took over the offense. The Jets are 1-4 ATS over their last five games while Jacksonville is 5-2 ATS over their last seven games following a an ATS loss. 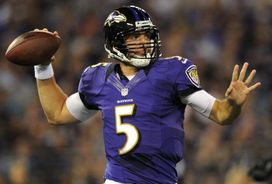 US PRESSWIREFlacco's road woes have the early bettors taking a position on the Redskins.

Analysis: One of the biggest swings of the week, this game opened as a pick ‘em before the books took enough cash on the red-hot Redskins to adjust the number 2.5 points towards the home team. Several factors are in play here, beginning with the fact that Ravens quarterback Joe Flacco has been terrible on the road this season (QB rating: 70.2). Not only that, but Baltimore is 1-4 ATS over their last five games following an ATS loss and could get caught looking ahead in this one to next week’s home showdown with Peyton Manning and the Denver Broncos. As for the ‘Skins, RG3 and his cohorts have covered the number in three straight games and are 5-1 ATS over their last six contests against teams with a winning record.

Analysis: Despite the fact that Big Blue enters this matchup on short rest coming off a 17-16 loss to division-rival Washington, the early bettors are once again fading the New Orleans Saints, who have lost and failed to cover in each of their last two games. The Saints are a dome team traveling north to play outdoors in the cold weather and heavy winds with a banged-up offensive line. That’s not a good combination of factors when you’re trying to beat a team that is 5-2 ATS over their last seven games following a straight-up loss. Take note that the favorite is 7-1 ATS in the last eight showdowns between these two teams.

Analysis: The marquee showdown of the week pits two teams battling for AFC home field advantage against one another, as a Texans squad that is 8-4 ATS this season travels to New England for a date with the 7-5 ATS Patriots. New England is 28-2 SU over their last 30 home games, but is just 1-4 ATS over their last five games played in the month of December. It was a bit surprising to see the books open this game over the key number of three, especially when you take into account the fact that Houston is 9-3 ATS over their last 12 road games and 9-1-1 ATS over their last 11 matchups against teams with a winning record.

Note: The status of Texans CB Johnathan Joseph (hamstring) is a critical factor here, so be sure to stayed abreast of the injury reports out of Houston this week.