Bowl season can’t come soon enough as the 2014 college football campaign is about to put a bow on the impressive ass-kicking it handed me over the last three months. This week’s card features a mix of dogs and favorites, most likely in the incorrect order.

<p> Analysis: In Central Florida’s 15 losses suffered since 2011, ten have come by seven or fewer points, with two of the larger defeats coming at the hands of a 14th-ranked Ohio State team and 20th-ranked Missouri club. This is a strong Knights defense that is surrendering an average of just 166.2 passing yards per game this season with only 12 aerial touchdowns permitted. Keep that in mind when you consider the fact that the strength of the ECU offense is the passing game, as the Pirates are averaging 364.6 passing yards per contest in 2014 with 26 touchdowns. In addition, Central Florida is 4-1 ATS over its last five showdowns with East Carolina and 4-1 ATS over its last five games overall, while ECU has covered the number just one time over its last seven outings.

Analysis: This is a rematch of last year’s MAC title game in which a 47-27 upset win for the Falcons crushed Northern Illinois’ dreams of a BCS bowl game (NIU was 12-0 entering the MAC Championship) while simultaneously ending the Huskies’ 25-game conference winning streak. So it’s safe to say that Northern Illinois will have revenge on its mind when these two get together Friday at Ford Field in Detroit. NIU enters the conference championship with a turnover differential of +10 while having won six straight contests by an average of 7.5 points per game. Meanwhile, Bowling Green heads to Detroit having lost two-straight to Toledo and Ball State, who are a combined 13-11 on the season. 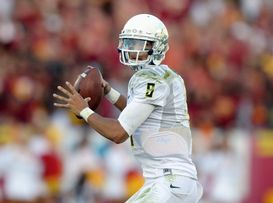 US PRESSWIREMarcus Mariota is one game away from the Heisman Trophy and college football playoffs.

Analysis: Oregon’s lone defeat of the 2014 season—a loss, mind you, that many thought would derail the Ducks’ national championship hopes—came against this very same Arizona squad that became just the third team to win at Autzen Stadium since 2009 (USC and Stanford are the others). Since that setback, the Ducks have been destroying the competition, winning and covering seven straight contests by an average of 24.2 points per game. The Wildcats have had a mighty fine season under head coach Rich Rodriguez, but while they were gutting out a 42-35 win over in-state rival Arizona State last Saturday, Oregon was cruising to a 47-19 victory over Oregon State. In addition, take note the Arizona is just 1-7 ATS over its last eight games played on grass while Oregon is 14-3 ATS over its last 17 games played on grass.

Analysis: Marshall’s dreams of a perfect season and marquee bowl game evaporated faster than summer sweat in the southern Nevada desert last Saturday following a 67-66 overtime loss to Western Kentucky. So with their bubble having officially been popped, will the Thundering Herd even bother to show up for this one? That’s an important question to ask because we know Louisiana Tech, who is 20-7 ATS over its last 27 road games, will be coming to play seeing as how this is the school’s first-ever appearance in the Conference USA title game. We’ll take the points here.

Notable trends: Louisiana Tech is 16-5 ATS over its last 21 road games against teams with a winning home record.

Analysis: Interestingly enough, Florida State’s current 28-game winning streak began on December 1, 2012 with a 21-15 victory over, you guessed it, Georgia Tech. But this Seminoles team has been living on borrowed time, with four of the school’s last five wins coming by five or fewer points. In addition, while Florida State and turnover-prone quarterback Jameis Winston are 3-10 ATS over their last ten games overall, Georgia Tech, fresh off an upset of SEC school Georgia, has covered the number in five straight contests. Also worth noting is the fact that the Yellow Jackets are 3-0-2 ATS over their last five meetings with the Seminoles.