Eagles running back LeSean McCoy (concussion) is not expected to play on Thursday night when Philadelphia hosts the Cincinnati Bengals. Rookie Bryce Brown will get another start against a defense that is giving up an average of 18.5 fantasy points per game to opposing running backs this season (13th-most in NFL).

Redskins fans can breathe a sigh of relief as quarterback Robert Griffin III sustained a sprained LCL in Sunday’s win over Baltimore instead of suffering a more severe injury that would have knocked the rookie signal-caller out for the season. RG3 has not been ruled out for Sunday’s game against the Cleveland Browns. Should he be unable to go, fellow rookie Kirk Cousins would get the start.

Cowboys wideout Dez Bryant suffered a fractured index finger in Sunday’s win at Cincinnati and as of the current moment, team officials are still determining the best course of action. Bryant could be shut down for the season, or he could miraculously play this weekend against the Pittsburgh Steelers. Should he be ruled out, look for Kevin Ogletree to play an increased role in the Dallas offense.

Kansas City Chiefs wide receiver Dwayne Bowe (59-801-3) has been placed on injured reserve after suffering broken ribs in Sunday’s loss at Cleveland. Look for Jonathan Baldwin to see an increase in targets in the coming weeks.

Buffalo Bills running back Fred Jackson is done for the season after sustaining a sprained MCL in Sunday’s loss to St. Louis. C.J. Spiller will continue to handle the bulk of the workload for the Bills over the next few weeks, with former Cowboy Tashard Choice taking over as the No. 2 ball carrier in Buffalo.

Nick Foles, QB, Philadelphia Eagles: Granted, it came against the league’s worst pass defense, but the rookie from Arizona looked mighty impressive in Sunday’s win over Tampa Bay. Foles completed over 62% of his passes for the third straight week while amassing a career-high 381 yards and two scores (along with one rushing TD) with no interceptions in the Eagles’ 23-21 comeback win over the Buccaneers in Week 14. We all know that Philly loves to throw the football, so consider Foles a respectable QB2 for Thursday night’s home showdown with Cincinnati. 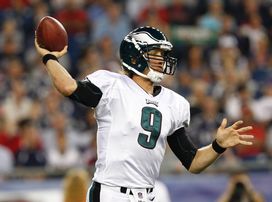 US PRESSWIREFoles is coming off a career-high 381 passing yards against the Tampa Bay Buccaneers.

DeAngelo Williams, RB, Carolina Panthers: Trust us, it isn’t easy putting a buy recommendation on Williams. But with Jonathan Stewart out of action with an ankle injury, Williams has rolled up 180 total yards and one touchdown over his last two starts. If you’re looking for a flex option due to injuries sustained by other players on your roster, Williams could help in Week 15 at San Diego. However, don’t get your hopes up too high.

Kevin Ogletree, WR, Dallas Cowboys: Keep an eye on the status of wide receiver Dez Bryant, who suffered a fractured index finger in Sunday’s win at Cincinnati. If Bryant is unable to go in Week 15 (and possibly beyond), Ogletree will likely step up into the No. 2 role. That means an increase in both targets and production.

Dennis Pitta, TE, Baltimore Ravens: Pitta has found the end zone in three of his last five starts and has a very tasty matchup this Sunday with a Denver Broncos defense that is surrendering an average of 9.9 fantasy points per game to opposing tight ends this season (third-most in NFL). Hopefully quarterback Joe Flacco is capable of exploiting this flaw in a must-win matchup for Baltimore.

Montell Owens, RB, Jacksonville Jaguars: Believe it or not, Owens has been in the league for seven years and entered last Sunday’s matchup with a grand total of just 21 career carries under his belt. But in his first real opportunity to make something happen the Maine product didn’t disappoint, touching the ball 15 times for 102 yards and one score in a 17-10 loss to the New York Jets. Should Maurice Jones-Drew and Rashad Jennings be unable to go once again this weekend, Owens will see another healthy workload.

Jonathan Baldwin, WR, Kansas City Chiefs: He’s done next to nothing so far this season (18-261-1), but with Dwayne Bowe headed to the shelf with broken ribs, Baldwin should be set to see a significant increase in targets. Just be sure to keep in mind that he plays on one of the worst passing offenses in the league, so the upside here is fairly minimal.

Clay Harbor, TE, Philadelphia Eagles: Caught a season-high six passes for 52 yards and a touchdown in Week 14 at Tampa and will start for the Eagles Thursday night against the Bengals due to a concussion suffered by Brent Celek last Sunday. Take note that the Bengals are currently surrendering an average of 8.1 fantasy points per game to opposing tight ends this season (tenth-most in NFL).

Bilal Powell, RB, New York Jets: The Jets are currently employing a running back-by-committee approach, but even so, Powell has found the end zone four times over his last four games. While his overall touches may be somewhat limited, keep in mind that Tennessee currently ranks 23rd in the NFL against the run (127.0 yds/gm) and is surrendering an average of 23.1 fantasy points per game to opposing running backs this season (third-most in NFL).

Brandon Weeden, QB, Cleveland Browns: The Browns have won three straight contests with their rookie quarterback throwing for an average of 246.3 yards per game. The upside here is limited, but if you’re in a pinch, Weeden is worth consideration thanks to a Week 15 matchup with a Washington Redskins defense that is giving up an average of 22.8 fantasy points per game to opposing quarterbacks this season (third-most in NFL).

Lestar Jean, WR, Houston Texans: Recommended solely for owners who play in leagues with more than 12 teams, Jean is beginning to play a bigger role in the Houston offense as of late. He’s only caught three passes over the last two weeks, but those receptions accounted for 85 yards and a touchdown. Consider Jean a WR4 who might be able to fill in, should you find yourself in a jam.

Tony Scheffler, TE, Detroit Lions: Scheffler could be in line for a big increase in targets if starter Brandon Pettigrew (ankle) is unable to go this weekend when the Lions head to Arizona to face the Cardinals. Scheffler found the end zone for the first time this season last Sunday night and has amassed an impressive 31 targets over his last four starts.

Jason Avant, WR, Philadelphia Eagles: Rookie quarterback Nick Foles loves throwing the rock to this guy, who has accumulated 11 receptions for 212 yards on 17 targets over his last two starts. With DeSean Jackson out of commission for the remainder of the season, look for Avant’s role within the Philadelphia offense to keep expanding.

Miami Dolphins, D/ST: Not the most reliable of units, but Miami is worthy of serious consideration in Week 15 when the Dolphins play host to a Jacksonville Jaguars team that currently ranks 31st in the NFL in total offense (282.9 yds/gm). In addition, the Jags also rank just 30th in total scoring this season (16.6 pts/gm).

Detroit Lions, D/ST: All you need to know is that they play the Cardinals this week, who were shutout and committed eight turnovers at Seattle last Sunday. In case you want some more information as to why we love this pick, take note that Arizona currently ranks dead last in both total o ffense (269.5 yds/gm) and scoring (14.3 pts/gm).