Just like those Baylor Bears we love to play during the first half, this year’s CFB betting primer is off to a fast start. Sadly, our boys from Waco didn’t make the cut this week, but we’ve got five other players for you to circle heading into Week 2 of the college football season.

Analysis: Western Kentucky enters this matchup with an extra day of rest after rolling up an astounding 702 yards of offense last Friday while bulldozing defending MAC champion Bowling Green by a score of 59-31. Seriously, how many of you watched that game? WKU looked to be in mid-season form right from the jump by forcing a three-and-out to open the game, which preceded a surgical, 83-yard march down the field for a 7-0 lead. The Hilltoppers move fast and score even faster, which is a big plus for a squad that is 20-7-1 ATS over its last 28 road games. Illinois, on the other hand, opened the season with a lackadaisical 28-17 victory over Youngstown State, a game in which the Fighting Illini were trailing 9-7 entering the fourth quarter. Illinois has covered the number just seven times in their last 22 outings, so don’t be shocked if WKU pulls off the outright upset in this one.

Analysis: Excellent spot for the Utes here as Fresno State is coming off a 52-13 shellacking at the hands of the USC Trojans in a matchup where Steve Sarkisian’s crew set a Pac-12 record by running 104 offensive plays. Now the Bulldogs have to hit the road for the second consecutive week—this time at a much higher altitude—to face a Utah team on two extra days of rest after thoroughly dismantling Idaho State 56-14 last Thursday night. Quarterback Derek Carr is no longer around to bail out a Bulldogs team that is 1-5 ATS over its last six non-conference games. Meanwhile, Utah is healthy on offense after several notable setbacks last season (QB Travis Wilson) and is 9-4 ATS over its last 13 home contests. 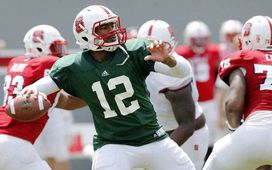 Brissett came up huge for the Wolfpack in last week's come-from-behind win.

Analysis: Talk about sweating bullets. We played Georgia Southern plus the points last Saturday against N.C. State, but OVER 5.5 wins on the Wolfpack was our biggest season win total wager of the college football season…and that bet was going down in flames right up until transfer quarterback Jacoby Brissett engineered a 75-yard touchdown drive with 3:35 remaining to pull out a 24-23 come-from-behind win. Brissett’s overall performance (28/40, 291 yards, 3 TDs, 1 INT) and second half surge (outscored Georgia Southern 21-6 in 2H) are exactly why we love the Wolfpack Saturday against an Old Dominion squad that is severely lacking in offensive firepower and only launched their football program in 2009. This is a big step up in class against a school that will be riding high on last week’s emotional comeback win. Be advised that this number should continue to climb, as SportsBookReview.com shows several books are already moving to N.C. State -17.

Notable trends: N.C. State is 3-7-1 ATS over its last 11 games played during the month of September.

Analysis: This point spread gives the illusion of a total mismatch, but Michigan State and defensive coordinator Pat Narduzzi are capable of hanging with any team in the country…and that includes the high-flying Ducks. In order to beat a team like Oregon you need smart quarterback play and the ability to move the sticks and control the clock. Spartans signal-caller Connor Cook has 18 career appearances under his belt with a lifetime TD-INT ratio of 27-7, so he’s got the chops to handle the big spot in Eugene. Additionally, for as much scoring as Oregon does, the Ducks don’t exactly cover an abundance of spreads. Oregon is 1-5 ATS over its last six games overall while Michigan State is 16-5-1 ATS over its last 22 road contests and 7-1 ATS over its last eight matchups overall. This game has national championship implications hanging in the balance for two schools that have had this matchup circled since last January.

Analysis: Yeah, this is a “bounce back” spot for the Broncos after Boise State got steamrolled 35-13 by Mississippi in Atlanta last Thursday night, but this is just too many points to lay against Colorado State. After falling behind 17-7 on the road at rival Colorado during the third quarter last Friday night, the Rams put their foot down on the gas pedal and stomped the Buffaloes 24-0 over the remainder of the contest for a 31-17 win. Head coach Jim McElwain has this Colorado State program on the rise, as the Rams are 5-1 ATS over their last six games overall an d 5-2 ATS over their last seven conference matchups. This is a new era for Boise State football since legendary head coach Chris Petersen bolted during the offseason for the Washington job. Note that the Broncos haven’t covered a spread in any of their last four games and are 7-15 ATS over their last 22 conference contests.