A solid start to the season came to an abrupt and sobering (although not at the time) halt last Saturday with a dismal 1-4 effort. We’re only two weeks into the 2014 college football season and it’s already been a roller coaster of a ride.

Let’s try to right the ship and get back on track for Week 3. 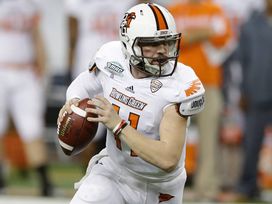 Bowling Green quarterback Matt Johnson is out for the season with a hip injury.

Analysis: Indiana enters Saturday’s showdown at Bowling Green on two weeks rest after defeating Indiana State 28-10 to open their season on August 30, a matchup in which the Hoosiers rushed for 455 yards and four scores on 69 carries. Credit a solid offensive line with a combined 130 career starts for the ease in which Indiana ran the ball up and down the field. Bowling Green bounced back from a 59-31 throttling at the hands of Western Kentucky two weeks ago to defeat the Virginia Military Institute 48-7 on Saturday, but the Falcons will be without experienced starting quarterback Matt Johnson for this one, who was lost for the season with a hip injury. Sophomore backup James Knapke looked decent in relief (22/31 for 237 yards, 1 TD), but this is a big step up in class for an untested signal-caller learning a new system. We’re getting the worst of the number here, as Sportsbook Review.com shows that Indiana has already been bet up from -4 to -7, but think the Hoosiers should handle business on the road before heading home to start conference play.

Notable trends: Indiana is 3-1-1 ATS over their last five games after surrendering fewer than 170 passing yards in the previous contest.

Analysis: Syracuse needed double overtime to defeat FCS Villanova two weeks ago and is just 4-9 ATS in road openers since 2000. Speaking of that too-close-for-comfort encounter with the Wildcats on August 29, take note that Orange signal-caller Terrel Hunt was ejected from that matchup for throwing a punch. After a 20-16 win over Chattanooga to open the season, Central Michigan steamrolled Purdue on the road 38-17 last Saturday and is now 5-1 ATS over its last six games overall. This is a statement game for the Chippewas against an ACC school, so expect Kelly/Shorts Stadium to feature more energy than usual. This should be a tightly contested battle that comes down to which team makes more plays in the fourth quarter. If that prediction holds true, we’ll take +7 to make life a little easier.

Analysis: This game may not mean much to Georgia Tech, but it’s been circled on the Georgia Southern calendar for months, which is exactly why we’ll get a big effort from the Eagles for the second time in three weeks when it comes to this column. The Yellow Jackets’ biggest advantage over the competition is their patented triple-option offensive attack, which is very difficult to prepare for in just one week’s time. However, Georgia Southern is well versed in the intricacies of the triple-option and won’t be caught off guard by anything Georgia Tech has to throw at them. Note that the Yellow Jackets are 3-8-1 ATS over their last 12 games overall, while Georgia Southern is 5-0 ATS over its last five road contests. Don’t be shocked if this game concludes in an outright win for the Eagles. 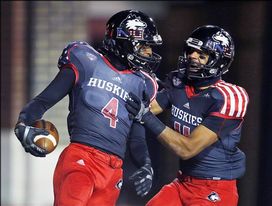 Analysis: This one requires little analysis. Northern Illinois is 13-3-1 ATS over its last 17 road games and has come out of the gate swinging this season with wins over Presbyterian (55-3) and Northwestern (23-15). The Rebels, on the other hand, looked terrible in both a blowout loss to Arizona (58-13) and a by-the-skin-of-their-ass victory over Northern Colorado (13-12), a game in which UNLV was favored by 27.5 points. The Huskies should roll here.

Analysis: Those of you who have been reading my work over these last few years know that I’m both a Penn State graduate and a big fan of the James Franklin hire. And this is an especially exciting time now that the Nittany Lions’ bowl ban has been lifted and the school’s scholarship reductions will conclude after this season. But I’ve watched each of this team’s first two games and, while I’m stoked they emerged 2-0, can’t say that my alma mater is ready to contend on a national level. Quarterback Christian Hackenberg has already tossed four interceptions this season and it took a fourth quarter touchdown for the Nittany Lions to pull out the cover last Saturday against Akron. PSU’s time is coming, but as for a Saturday night road showdown at Rutgers, we’ll take the field goal plus the hook in what should be a tightly contested, low-scoring affair.

Notable trends: Rutgers is 5-1-1 ATS over its last seven games after surrendering more than 200 rushing yards in the previous contest.