Before we begin, I just want to note that our college football betting primer will be posted on Wednesdays instead of Thursdays for the duration of the season. With some of the favorites we like to select each week, we would prefer to lock in our plays earlier in order to secure a more favorable number. 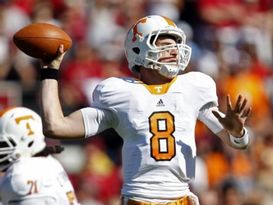 ICONCan the Vols put an end to their recent fun of futility against the Gators?

Analysis: No surprise to see this line move in Tennessee’s direction. Florida is coming off a tough conference road win at Texas A&M that saw running back Mike Gillislee—the SEC’s leading rusher with 231 yards—aggravate a groin injury that will have him at less than 100% for Saturday’s showdown. And don’t discount the revenge factor here, as the Vols have come out on the losing side of their last seven games with the Gators. If Tennessee is for real, this is their chance to prove it.

Analysis: Not exactly the start to the season the Badgers were looking for as Wisconsin fell at Oregon State last weekend 10-7, not to mention the fact that 2011 Heisman finalist Montee Ball is averaging just 3.9 yards per carry with one score over his first two starts. But Wisconsin’s in a good spot this Saturday with a home night game against a Utah State team that will have to travel over 1,300 miles and is coming off the school’s biggest win in years (27-20 over in-state rival Utah). Look for Utah State to come out flat while the Badgers get the train back on the tracks.

Matt Barkley has never beaten Stanford. Is this the year?

Analysis: This game opened as high as USC -10 and dropped as low as -7.5 on Tuesday before settling in at -8 across the board. That’s not a good sign for Trojan backers, as the early money definitely supports the Cardinal in this one. Saturday marks Stanford’s third-consecutive home game while the Trojans enter Pac-12 competition on the tail end of back-to-back road contests. USC quarterback Matt Barkley has never beaten Stanford, so this is definitely a revenge game for the Men of Troy. The big problem, however, is that there is a very strong lean to Stanford from some guys in the industry whom I respect very much.

Take note: The Trojans are 1-4 ATS in their last five meetings against the Cardinal.

Pick: NO PLAY. I have some futures bets on USC, so I don’t feel like fading my horse in this spot.

Analysis: Let’s try this one again, shall we? Buckeyes head coach Urban Meyer was 35-7 ATS lifetime against non-conference opponents before failing to cover the number in last week’s 31-16 win over Central Florida. But UCF’s defense deserves a hell of a lot more respect than the unit California will trot onto the field this weekend, which ranks 92nd in the country in points surrendered (31.0 pts/gm). In addition, Cal dropped their home opener to Nevada two weeks ago before giving up 31 points to Southern Utah last weekend in an unimpressive 50-31 win. And don’t forget, the Golden Bears have to travel over 2,400 miles for a non-conference game that kicks off at noon eastern.

Analysis: As our old friend Mike Lombardi always says, “If you have two quarterbacks, you have no quarterbacks.” Well, Notre Dame has like, six quarterbacks. And by the way, Michigan State’s defense has yet to surrender a touchdown this season. The Irish are a better football team than we’ve seen in the last few years, but they’ve failed to cover the number in their last five games against teams with a winning record.

Analysis: What would our weekly betting primer be without at least one selection on a semi-obscure underdog? Kentucky lost their opener 32-14 at Louisville before bouncing back last weekend to defeat that juggernaut Kent State team 47-14. And after this Saturday’s matchup with WKU, the Wildcats begin SEC play with big-time showdowns at Florida and vs. South Carolina in back-to-back weeks. The Hilltoppers are going to put much more emphasis on this game, not to mention the fact that they are 13-2-1 ATS in their last 16 road games.