Last Tuesday we previewed six games that featured notable point spread adjustments from the time the “look ahead line” hit the board until the time of our analysis. In those six matchups, the teams that saw the line move in their direction went 5-1 straight-up and 4-2 against the spread in Week 3. This is obviously a very small sample size, but it’s certainly a trend worth monitoring as we move forward through the 2013 NFL campaign.

CLICK HERE to check out all of the current Week 3 lines.

Marshawn Lynch and the Seahawks head into Week 3 as 19.5-point favorites over the Jacksonville Jaguars.

Analysis: The biggest move of the week takes place in the city with the greatest home field advantage in the league as the undefeated Seattle Seahawks (2-0 ATS) re-open as a 2013 league-high 19.5-point favorite over the 0-2 Jacksonville Jaguars (0-2 ATS). Since 1989, favorites of 17.5 or more points are 17-1 straight-up, but a bank account-busting 4-14 ATS (.222). That being said, there’s absolutely no way I’ll ever bet against the Seahawks when they’re playing within the uproarious confines of CenturyLink Field.

Analysis: Bad spot for a winless Browns team that has scored a grand total of just 16 points through their first two games, as Cleveland hits the road for the second consecutive week to take on a desperate Minnesota team playing in their home opener. The Browns are 2-5 ATS over their last seven road games and have a home date with division rival Cincinnati on deck, while the Vikings are 7-3-1 ATS over their last 11 home games against teams with a losing road record.

Analysis: The Patriots may be 2-0, but this isn’t the same New England offense we’ve grown accustomed to watching over the last ten years. Tom Brady and company have beaten the Bills and Jets by a combined five points and are averaging a highly pedestrian 18.0 points per game on the season. But how do you back a downward-spiraling Tampa Bay team in this spot, who just so happens to lead the league in penalties called against, with a staggering 26? New England enters this game on extra rest while Tampa Bay appears to be on the verge of a full-fledged mutiny. Also note that Pro Bowl tight end Rob Gronkowski is reportedly “50-50” to play in this one.

Analysis: The Dolphins are getting they respect they deserve after going undefeated on a two-game road trip to open the season. Miami now returns to South Florida for a non-conference date with a banged-up Atlanta team that looks a far cry away from the Super Bowl contender many predicted them to be back in August. Take note that the Falcons are 1-3-1 ATS over their last five road games while the Dolphins are 5-1 ATS over their last six games played on grass. Also note that after opening the week at -1, the early money has already pushed this line to Miami -2. 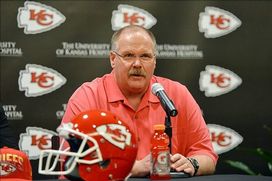 Andy Reid looks for redemption against his former club on Thursday night.

Analysis: It took exactly six days for the Chip Kelly love fest to smash head-first into a brick wall, courtesy of a dismal performance in a 33-30 home defeat to the San Diego Chargers that saw Kelly mismanage the game on multiple occasions. While it was covered up nicely by an explosive offensive performance in Week 1, the Philadelphia defense is a shoddy unit that was torched by Philip Rivers and his band of nobody wide receivers on a repeated basis last Sunday afternoon. The upside for the Birds is that Kansas City has to travel on short rest for this one, but rest assured that head coach Andy Reid will do everything in his power to stick it to his former club.

Analysis: Ravens head coach John Harbaugh is 34-7 straight-up and 22-18-1 ATS at home during the regular season since arriving in Baltimore in 2008, but you can’t help but question his offense in the wake of back-to-back lackluster performances against the Broncos and Browns. Quarterback Joe Flacco currently boasts a QB rating of just 78.1 and is in desperate need of playmakers for his already depleted arsenal. In addition, Pro Bowl running back Ray Rice suffered a hip flexor in Sunday’s win over Cleveland and may be unavailable for action in Week 3. But all that being said, it’s not exactly a comfortable feeling when backing Texans head coach Gary Kubiak in a big spot. Sure, Houston is 2-0, but the Texans have yet to cover the spread in 2013. Take note that Harbaugh is 1-2 both straight-up and against the spread as a home dog.

Analysis: Since 2008, the Saints are 30-11 straight-up and 27-13-1 ATS (.675) at home during the regular season. And after two games, the New Orleans defense currently ranks in the top-10 in the NFL in turnovers, yards per game, scoring defense and third down conversions. All of that could have bettors lining up at the window to back the Who Dats in Week 3, but this Arizona team is a much-improved unit over what the organization has trotted onto the field in recent memory. However, take note that the home team in this series is 4-0 ATS over the last four meetings and that the Cardinals are just 2-5 ATS over their last seven clashes with the Saints.

Analysis: The Raiders are 6-1 ATS over their last seven visits to Denver and the road team in this series is 8-2 ATS over the last ten meetings. Those trends, coupled with the impressive play of Oakland quarterback Terrelle Pryor, has this line moving towards the Silver & Black in advance on Monday night’s showdown. However, take note that Peyton Manning and the Broncos smashed Oakland 37-6 when these two squads met in Denver last season. Also note that Manning is now 8-1 straight-up and 7-2 ATS at home during the regular season since joining the Broncos in 2012.