While it didn’t qualify for this week’s official selections, keep a close eye on the Colorado State-Alabama showdown this Saturday (7:00pm ET). The Crimson Tide are currently 40-point favorites for this matchup, but may be inclined to take their foot off the gas pedal in the second half due to the fact that current Rams head coach Jim McElwain served as the ‘Bama offensive coordinator from 2008-2011. Also note that the Crimson Tide are coming off a monster win against marquee opponent Texas A&M. In each of the last two years when ‘Bama beat their marquee opponent (LSU), the Tide came back the following week and failed to cover the spread.

Last week: 3-2 (Fresno State-Colorado was cancelled due to weather) 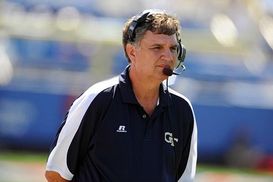 US PRESSWIREPaul Johnson's Yellow Jackets have been rock solid against UNC over the last few years.

Analysis: The Yellow Jackets followed up their 70-0 season-opening dismantling of Elon with a comfortable 38-14 win and cover over conference opponent Duke last Saturday, moving Georgia Tech to 4-0 ATS over their last four home games and 8-2 ATS over their last ten games played in the month of September. But take note that the spot favors North Carolina, as the Tar Heels have had two weeks to prepare for this game, while Georgia Tech has a Thursday night showdown with Virginia Tech on deck. That being said, we’re still going to back Paul Johnson and a Yellow Jackets team that is 4-0 ATS over their last four meetings with UNC.

Analysis: The Cardinals are 5-2 ATS in their last seven trips to Eastern Michigan and are out for redemption following last Saturday’s 34-27 loss at North Texas. Eastern Michigan currently ranks 117th in the nation in scoring (17.0 pts/gm), 94th in scoring defense (32.3 pts/gm) and is coming off a 28-10 loss at Rutgers in which the Scarlet Knights dominated the game despite throwing the ball only 13 times. The Cardinals are looking up at Northern Illinois, but have a legitimate shot to win conference this season. Expect Ball State to open MAC play in spread-covering fashion. 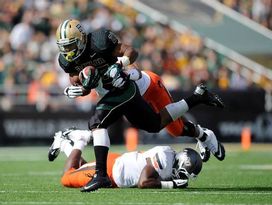 US PRESSWIREBaylor running back Lache Seastrunk has rushed for five touchdowns on just 28 carries this season.

Analysis: Baylor is 14-2 ATS over their last 16 home contests, has outscored the opposition 139-16 through just two games and was pushed to the brink by this same ULM team last season, 47-42. Expect a better and more decisive effort this time around against a Warhawks team that is averaging 23.0 points per game this year and was smashed by Oklahoma in their season-opener, 34-0.

Analysis: For as bad as San Diego State has looked this season, the Aztecs couldn’t ask for a better situation than the one in front of them for Saturday’s showdown with Oregon State. The Beavers enter the second leg of back-to-back road games in which the first half saw the team go to overtime in higher altitude at Utah last Saturday for a 51-48 win where Oregon State surrendered 539 total yards of offense. While the Beavers were spending every last drop of gas in the tank to earn that victory, SDSU was on a bye getting ready for this Saturday. Take note that Oregon State is 1-4 ATS over their last five games following a straight-up win.

Analysis: No matter where you look, the narrative for this showdown remains the same: Wyoming head coach Dave Christiansen is out for revenge against Air Force’s Troy Calhoun who, Christiansen alleges, had one of his players fake an injury in last year’s 28-27 win over Wyoming in order to avoid burning a timeout. Wyoming has covered every point spread on the schedule this season while Air Force’s only cover came by way of a 42-20 loss to Boise State in which the Falcons were 23-point underdogs. Take note that Wyoming quarterback Brett Smith (9 TDs, 3 INTs) is ready to go for this one after missing last year’s game due to injury. Also note that Air Force is 1-7 ATS over their last eight games.