While this weekend’s slate of action may be devoid of the high-profile, marquee matchups the country rearranges its collective schedule for, rest assured we found a few gems in the pile worthy of discussion for this week’s column.

Analysis: On one side of the ball you have a Wake Forest team that is averaging just 20.2 points and 262.7 total yards per game this season against the likes of UL-Monroe, Gardner-Webb, Utah State and Army. Additionally, the Demon Deacons are 0-2 on the road in 2014 and 5-14 ATS over their last 19 road games against teams with a winning home record. On the other side of the ball sits a nasty Louisville defense led by former Georgia defensive coordinator Todd Grantham that is surrendering an average of just 15.0 points and 260.2 total yards per game through four contests this year. We envision Wake Forest struggling to move the rock Saturday in Kentucky and it’s also worth noting that Louisville is 21-4 ATS over its last 25 games against ACC opponents and 5-1 ATS over its last six matchups overall. 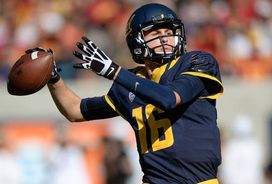 Analysis: The Buffaloes came through for us last Saturday by covering the number against Hawaii, but we’re reversing course in Week 5 and fading this Colorado team that is 16-37 ATS over its last 53 road games. Colorado’s lone road trip this season came three weeks ago in the form of a 41-38 victory over a Massachusetts team that went 2-22 from 2012-2013. As for California, what a difference a year makes for these guys. Head coach Sonny Dykes went 1-11 in his first year on the job last season, but has this Golden Bears team firing hot through the first three outings of 2014. Cal would be 3-0 and riding sky high if not for dropping a 49-45 heartbreaker at Arizona last Saturday night that ended on a successful Hail Mary for the Wildcats. Expect the Golden Bears to come out hungry in this one and note that this line has already moved from Cal -11 to as high as Cal -14, according to the odds board over at Sportsbook Review.com.

Notable trends: Colorado is 8-18 ATS over its last 26 games against teams with a winning record.

Analysis: We’re calling this the “Hold Your Nose” special of the week because we are likely to witness some really lousy football in our attempt to cover the number in this one. Bottom line: Moscow, Idaho is one of the most grueling travel destinations in all of college football and we’re hoping that this little nugget plays a vital role in Saturday evening’s outcome, as South Alabama hasn’t made a lengthy travel date since 2012 when the team fell 23-7 at Hawaii. In the interest of full disclosure, you’re better off not watching this one. Seriously, I’m not even sure there will be a camera crew in attendance.

Notable trends: South Alabama is 1-5 ATS over its last six games following a loss of 20 or more points.

Analysis: Missouri, the defending SEC East Champions, is coming off a 31-27 loss to Indiana, a football team that has won just 32.5 percent of its games with one winning season since 1996. So this week goes one of two ways: Either the Tigers have a great week of practice and bounce back strong, or the wheels fall off the bus completely while Missouri fades back into the recesses of irrelevance. We’re banking on the latter, as South Carolina followed up the school’s 38-35 upset win over Georgia by grinding it down to the wire last Saturday at lowly Vanderbilt. Head coach Steve Spurrier will find a way to get a much better effort out of his squad this weekend.

Notable trends: South Carolina is 4-1 ATS over its last five games following an against the spread loss. 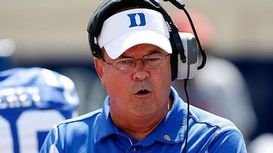 Few are paying attention to what HC David Cutcliffe has done with Duke.