How much fun was it to ride the first half of that Baylor game last Saturday? The Bears hit the board as 19-point favorites for the first half of their home showdown with Louisiana-Monroe and went into the locker room after 30 minutes of football with a 49-7 lead.

Sadly, Baylor is off this week. So we’ll just have to go ahead and target some other teams who can hopefully put it on cruise control this weekend. 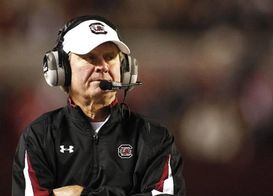 Since 2011, Spurrier has only covered the number once in five attempts as a road favorite.

Analysis: Both teams enter Saturday’s showdown riding an extra week of rest as South Carolina is coming off a 35-25 September 14 win over Vanderbilt while the Knights are two weeks removed from back-to-back road wins and covers over Florida International and Penn State, respectively. So why is the early money fading the 12th-ranked team in the country? Excellent question. Central Florida is 11-5 ATS over their last 16 games played in the month of September and 4-1 ATS over their last five home games. In addition, South Carolina head coach Steve Spurrier is just 1-2-2 ATS over his last five road games as a favorite. Expect the Gamecocks to encounter another hostile environment for the team’s second road contest of the season.

Analysis: There was a stretch from 2011 to 2012 in which Western Kentucky covered the number in 14 consecutive games, much to the delight of degenerate gamblers everywhere. But those days are long gone. Since that extremely lucrative covering streak, the Hilltoppers are 4-7 ATS and have undergone the transition from head coach Willie Taggart (now at South Florida) to Bobby Petrino, who appears to have a full-blown quarterback controversy on his hands at the moment. Further complicating matters for WKU is the fact that Navy enters this showdown on an extra week of rest following their thorough 51-7 dispatching of Delaware on September 14. Take note that Western Kentucky is 0-4 ATS over their last four games following an against the spread win.

Analysis: This Oregon State team has to be gassed after following up a 51-48 overtime win at Utah two weeks ago with a 34-30 come-from-behind victory at San Diego State last weekend. The Beavers now have the luxury of returning home for the first time in weeks, but they’ll find a well-rested Colorado team that hasn’t played since September 7 waiting for them on the opposite sideline. New Buffaloes head coach Mike MacIntyre has Colorado off to its first 2-0 start since 2008 thanks, in large part, to an offense that is averaging 469.0 yards per game in 2013. Take note that Oregon State is 1-5 ATS over their last six games following a straight-up win.

Analysis: The Huskies had Michigan on the ropes last Saturday, leading 21-7 with approximately 21 minutes left to play before surrendering 17 unanswered points to blow the game, 24-21. That puts Connecticut in an 0-3 hole as the team travels to Buffalo on Saturday to face a Bulls team on an extra week of rest after a 26-23 five overtime win over Stony Brook on September 14. Connecticut is 0-7 ATS over their last seven games after recording less than 170 passing yards in the previous game and 1-5 ATS over their last six games on fieldturf. Also note the line movement in this one, as the early money steamed Buffalo from a 2.5-point home dog to a pick ‘em.

Winston and the Seminoles have been on fire through the first month of the season.

Analysis: Granted, the opposition has been less than stellar, but the Seminoles have been cooking with gas over the first month of the season, outscoring their opponents by an average of 43.6 points per game as redshirt freshman sensation Jameis Winston is completing a staggering 78.1 percent of his passes with eight touchdowns and only one interception. Boston College has had two weeks to prepare for this game following the team’s 35-7 loss at USC on September 14, but the Eagles will still be outmanned and outgunned in this matchup.

Analysis: Speaking of teams that are streaking through the month of September, head coach Steve Sarkisian and the Huskies have outscored the opposition by an average of 32.6 points per game this season while covering the number in two of their first three matchups. Washington also possesses one of the strongest home field advantages in college football, one that has seen the team go 13-3 ATS over their last 16 home outings. Take note that the home team is 5-0 ATS over the last five meetings between these two schools and don’t discount the revenge factor in this one, as Arizona destroyed Washington 52-17 last season in Tucson.

Pick: Washington (purchaesd at -9 on Tuesday)