The good news is that we’re still hovering above the .500 mark for our selections on the season. The bad news is that the last two weeks have been a total grind. Let’s see if we can turn the tides in Week 5 and get this train back on the tracks.

Analysis: After knocking off the Kentucky Wildcats 32-31 on the road in overtime two weeks ago, the Hilltoppers entered last Saturday in the dreaded “letdown situation.” And how did that work out, you ask? Western Kentucky blew the doors off Southern Mississippi 42-17 in a game that was never in doubt. That’s a sign of good coaching. WKU is cooking with gas right now and is 17-4 ATS in their last 21 conference games. If this team covers another number for us, we’ll seriously consider buying the jersey.

Analysis: Bowen’s going to give me a world of crap for this, but the Hawkeyes don’t look like a very good football team right now. Iowa has dropped two of their last three and is just 1-3 against the spread this season while the Gophers have quietly put together an impressive 4-0 run to open the year, with a 3-1 mark against the number. The point spread is moving against us, but now that it’s through the key number of 7, I’ve got no problem backing a dog that is 8-1 ATS in their last nine games overall.

Analysis: A four-point line movement towards a team that is 1-3? Yeah, that should sound off the alarms. Miami has yet to cover a spread this season and is just 6-18 ATS in their last 24 games played in the month of September. Meanwhile, the Zips are 4-0 ATS in their last four September games and are coming off a hard-fought cover against the Tennessee Volunteers. For the line to move this much, this fast, something’s got to be up.

Take note: The home team is 4-1 ATS in the last five meetings between these two teams. 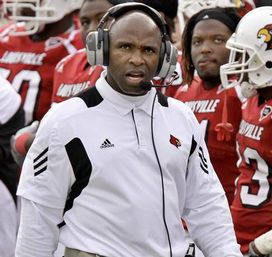 Charlie Strong and the Cardinals should have their way with Southern Mississippi.

Analysis: What would our weekly college football betting primer be if we didn’t include at least one obscure game for you to consider? This line likely won’t be posted until Saturday morning, so keep that in mind when you roll out of bed after a long Friday night on the town. I don’t have any trends or any solid analysis to give you except for the fact that I’ve talked to a couple of guys here in town whose opinions I very much respect that plan on backing Stony Brook. Remember, Army is 0-3 this year and ranks 123rd in the country in points surrendered (44.0 pts/gm).

Take note: No trends for this bad boy. My apologies.