Justin Blackmon, WR, Jacksonville Jaguars (at St. Louis, owned in 42% of Yahoo! leagues): Returns from a four-game suspension this week and should quickly become quarterback Blaine Gabbert’s primary target, especially on those rare occasions when Jacksonville reaches the red zone. Caught 64 passes for 865 yards and five scores as a rookie in 2012.

Rashad Jennings, RB, Oakland Raiders (vs. San Diego, owned in 8% of Yahoo! leagues): Amassed 116 total yards on 23 touches filling in for the injured Darren McFadden in Sunday’s loss to Washington. Run DMC is dealing with a hamstring injury and is unlikely to be anywhere near 100% for Week 5, assuming he is capable of playing at all.

Brian Hoyer, QB, Cleveland Browns (vs. Buffalo, owned in 6% of Yahoo! leagues): Followed up his 321-yard, 3-touchdown effort in Week 3 at Minnesota with a solid 269-yard, two-touchdown performance (QB rating: 103.9) against Cincinnati on Sunday. Takes on a Buffalo defense Thursday night that currently ranks 22nd in the NFL against the pass (277.0 yds/gm).

Alshon Jeffery, WR, Chicago Bears (vs. New Orleans, owned in 47% of Yahoo! leagues): Broke out in Week 4 at Detroit with a 5-107-1 stat line that included 11 targets. Unlikely to be a regular within your starting roster, but provides good depth as a WR4 who can be utilized during bye weeks.

Coby Fleener, TE, Indianapolis Colts (vs. Seattle, owned in 33% of Yahoo! leagues): Currently ranks 13th in fantasy scoring at the TE position after catching five passes for 77 yards and a touchdown Sunday at Jacksonville. Has found the end zone in two of four games this season.

Willis McGahee, RB, Cleveland Browns (vs. Buffalo, owned in 46% of Yahoo! leagues): Went from eight carries in his Week 3 season debut to 15 carries in Cleveland’s Week 4 upset win over Cincinnati. McGahee isn’t the type of “impact back” that can pave the way for fantasy victories week in and week out, but he brings respectable depth to the table and has a favorable Week 5 matchup against a Buffalo defense that currently ranks 27th in the league against the run (122.2 yds/gm).

Jerome Simpson, WR, Minnesota Vikings (bye, owned in 10% of Yahoo! leagues): Is averaging a healthy 85.5 receiving yards and 8.0 targets per game through the first four weeks of the season, with two 100+-yard efforts already under his belt in 2013. In addition, Simpson recorded a season-high 11 targets in Week 4 after veteran quarterback Matt Cassel stepped in for an injured Christian Ponder.

LeGarrette Blount, RB, New England Patriots (at Cincinnati, owned in 6% of Yahoo! leagues): Is averaging 4.6 yards per carry this season after Sunday night’s nine-carry, 64-yard effort (one touchdown) in a win at Atlanta. Will lose carries to Stevan Ridley and should experience a stock hit with the eventual return of Shane Vereen, but for the moment, Blount is decent RB4 option, especially now that we have reached the bye weeks.

Nate Washington, WR, Tennessee Titans (vs. Kansas City, owned in 16% of Yahoo! leagues): Currently leads the Titans in receiving yards (332) after Sunday’s 4-105-2 stat line in Tennessee’s 38-13 blowout win over the New York Jets. Washington is averaging a healthy 7.5 targets per game this season and in our opinion, makes for a respectable WR4 moving forward. 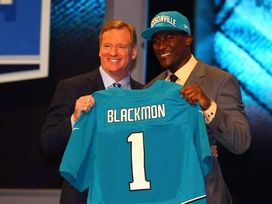 Justin Blackmon returns to action this week after serving a four-game suspension.

Roy Helu, RB, Washington Redskins (bye, owned in 13% of Yahoo! leagues): Recommended as an investment that could pay dividends later in the season. After notching just one carry through the first three weeks of the season, Helu carried the ball 13 times (41 yards, 1 TD) in Week 4 at Oakland and based on the less-than-stellar numbers that starter Alfred Morris has posted to date, Helu could be in line for a larger share of the workload moving forward.

Sean McGrath, TE, Kansas City Chiefs (at Tennessee, owned in less than 5% of Yahoo! leagues): Posted a season-high five receptions for 64 yards and a score on five targets in Sunday’s win over the New York Giants. Recommended solely for owners in leagues with more than 12 teams.

Matt Cassel, QB, Minnesota Vikings (bye, owned in less than 5% of Yahoo! leagues): Shredded the Pittsburgh defense in Week 4 to the tune of 248 yards and two touchdowns (zero interceptions, 64% completion percentage) and could be in line for more starts based on the fact that he guided the Vikings to their first win of the season. Only recommended for owners who play in leagues with 12 or more teams that allow two starting QBs.

Austin Pettis, WR, St. Louis Rams (vs. Jacksonville, owned in less than 5% of Yahoo! leagues): Has found the end zone in two of his last three starts and is averaging 7.7 targets per game through the first four contests of the season. We consider Pettis a WR4 for owners in leagues with 12 or more teams. And based on the way the St. Louis defense has played this season, we expect the Rams to be throwing the ball late into the fourth quarter on a weekly basis.

Michael Floyd, WR, Arizona Cardinals (vs. Carolina, owned in 57% of Yahoo! leagues): Has yet to find the end zone in 2013, but is averaging 7.2 targets per game and has topped 80 receiving yards in two of his four starts this season. Nothing more than a WR4 until Carson Palmer wakes up and the Cardinals start scoring more points.

Robert Woods, WR, Buffalo Bills (at Cleveland, owned in 13% of Yahoo! leagues): The rookie from USC has found the end zone in two of four starts this season and is averaging 50.2 receiving yards per game. But with a rookie quarterback at the controls in E.J. Manuel, Woods’ production will be anything but consistent while the young quarterback looks to get more comfortable with the pace of play at the NFL level. Considered a WR4/5 in leagues with more than 12 teams.

Terrance Williams, WR, Dallas Cowboys (vs. Denver, owned in less than 5% of Yahoo! leagues): Filled in admirably for an injured Miles Austin with a 7-71-0 stat line in Sunday’s loss at San Diego (8 targets). Playing opposite Dez Bryant and with Tony Romo under center, Williams has a fair amount of potential, assuming he takes the filed over Austin moving forward. Otherwise, the upside here is minimal.

Cleveland Browns, D/ST (vs. Buffalo, owned in 9% of Yahoo! leagues): Surrendering an average of just 17.5 pts/gm through four weeks (eighth in NFL) and plays host on Thursday night to a Buffalo team that boasts a rookie quarterback traveling on short rest. Great spot here for the Browns.

St. Louis Rams, D/ST (vs. Jacksonville, owned in 53% of Yahoo! leagues): On extra rest, St. Louis plays host to a Jaguars team on Sunday that is scoring a league-worst 7.8 pts/gm. Need we say more?

Atlanta Falcons, D/ST (vs. NY Jets, owned in 18% of Yahoo! leagues): Atlanta has struggled on the defense side of the football t his season, but the team still possesses a noticeable home field advantage, which should come in handy against rookie quarterback Geno Smith and a Jets offense that is playing their second consecutive road game and scoring only 17.0 points per game this season (28th in NFL).

San Diego Chargers, D/ST (at Oakland, owned in 25% of Yahoo! leagues): Recommended for the same reason as the three aforementioned defenses: They have a great Week 5 matchup against a lousy offense (17.8 pts/gm, 24th in NFL).