Brian Hartline, WR, Miami Dolpins: He’s posted 100+ receiving yards in two of his last three starts, which includes Sunday’s career-high 12 receptions for 253 yards and one touchdown. Perhaps the biggest reason why you should look to acquire Hartline this week is the fact that the former Ohio State Buckeye has already rolled up 48 targets on the season. Ryan Tannehill likes throwing the rock to this guy.

Jerome Simpson, WR, Minnesota Vikings: Simpson returned from suspension on Sunday to record four receptions for 50 yards in the Vikings’ win at Detroit. Those aren’t gaudy numbers by any stretch, but the former Cincinnati Bengal is going to produce in this offense. Consider Simpson a WR3/4 moving forward.

Owen Daniels, TE, Houston Texans: Daniels found the end zone for the second straight week this past Sunday and now ranks in the top-8 in fantasy scoring at the tight end position. He’s a semi-inconsistent option due to all of the legitimate weapons on the Houston offense, but we like his potential for owners in leagues with ten or more teams. 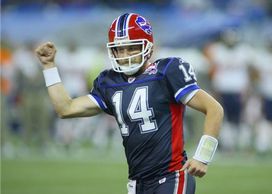 The Bills may be 2-2, but Fitzpatrick has been rolling up some big-time numbers.

Ryan Fitzpatrick, QB, Buffalo Bills: There’s really no way Fitzpatrick should still be sitting on waivers. He currently ranks eighth in fantasy scoring at the QB position and is coming off a 350-yard, four-touchdown performance against the New England Patriots. Take note that through four weeks, Fitz is averaging three touchdown passes per game.

Jackie Battle, RB, San Diego Chargers: Don’t be shocked if Ryan Mathews moves back into the starting lineup for San Diego’s Week 5 showdown with the Saints, but at this point, Battle is worthy of a roster spot as well. The former Chief has scored three touchdowns over his last three starts and when you factor in Mathews’ history with injuries, Battle is worth stashing deep on your roster just in case.

Matt Hasselbeck, QB, Tennessee Titans: Assuming that Dalton and Ponder aren’t available on waivers, Hasselbeck isn’t a terrible option as a QB2 for the next few weeks while starter Jake Locker recovers from a separated shoulder. The savvy veteran threw for 193 yards and two scores on the road at Houston on Sunday and heads to Minnesota in Week 5 for a game that should see him throwing the ball 32+ times.

Chaz Schilens & Jeremy Kerley, WRs, New York Jets: Neither player will make for a consistent WR option this season since quarterback Mark Sanchez can’t seem to complete more than 50% of his passes. However, with Santonio Holmes headed to the shelf for what could be an extended period of time, both Schilens and Kerley are worthy of bench spots in leagues with more than 12 teams. Somebody needs to step up in Holmes is unable to play.

Brandon Bolden, RB, New England Patriots: His 137-yard performance against the Bills is likely to have owners excited about his potential moving forward, but keep in mind that Stevan Ridley is the starter in New England and Bolden will likely see limited touches most weeks moving forward. Probably worth stashing in leagues with more than 12 teams, but the upside here is relatively limited.

Domenik Hixon & Ramses Barden, WRs, New York Giants: These two are worth owning as long as starter Hakeem Nicks continues to miss time with both knee and foot injuries. The edge goes to Hixon, who caught six passes for 114 yards against the Eagles on Sunday night.

Minnesota Vikings, D/ST: This isn’t a unit you can plug in on a week to week basis, but the Vikings are surrendering an average of just 18.0 points per game so far this year and have a favorable home matchup against the Tennessee Titans in Week 5. If you’re in a tight spot with your regular D/ST, this isn’t a bad unit to acquire for Sunday. Keep in mind that these guys currently rank sixth in fantasy scoring at the D/ST position.

Andre Roberts, WR, Arizona Cardinals: Roberts has found the end zone in three of four starts this year and now has a grand total of four touchdowns on the season. His 118-yard performance against the Dolphins in Week 4 shows he’s got the potential to produce big things, but quarterback Kevin Kolb’s inconsistencies will limit Roberts’ overall upside. Still, consider him a WR3/4 in league’s with 12 or more teams.

Randall Cobb & James Jones, WRs, Green Bay Packers: Greg Jennings pulled his groin for the second time in four weeks on Sunday against the Saints and could be headed to the shelf in order to get 100% healthy. That will open the door for Jones and Cobb to see more playing time alongside Pro Bowl quarterback Aaron Rodgers. Jones caught five passes for 56 yards and two scores in Week 4.