While it’s not an official play for Week 6, the always explosive and undefeated Baylor Bears return to the gridiron following their bye as 27.5-point favorites for a conference showdown with West Virginia this Saturday. We’re tempted to lay the lumber, but are more interested in the Baylor first half line, which has yet to be posted. Take note that through three games, Baylor has outscored the opposition in the first half by an average of 41.0 points per game.

Just another angle to keep in mind entering Saturday’s matchups.

Analysis: Let’s begin with a brief analysis of the two quarterbacks in this matchup. On one side sits Ball State’s Keith Wenning, who has 41 games under his belt, is completing 64.1 percent of his passes this season and currently boasts a career-best 152.3 QB rating. On the other sideline resides Virginia’s David Watford, who is completing only 59.3 percent of his passes this season with three touchdowns, six interceptions and a yards per attempt average of just 4.47. Edge: Ball State. Virginia is not a good football team, as evidenced by the fact that the Cavaliers are just 2-8-1 ATS over their last 11 home games. Ball State, on the other hand, is a rock solid 18-6 ATS over their last 24 games overall. Once again, edge to Ball State.

Notable Trends: Ball State is 13-4 ATS over their last 17 games following an against the spread win while Virginia is 4-13-1 ATS in their last 18 games overall. 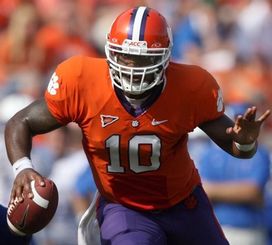 Tajh Boyd and the Tigers welcome Syracuse to ACC play this Saturday.

Analysis: This is a big step up in class for a Syracuse team that opens ACC play for the first time against the third-ranked team in the country in Clemson, who has smashed unranked opposition by double digits in 12 consecutive matchups. Syracuse’s two wins came in back-to-back games against the likes of Wagner and Tulane, while the team’s two losses were at the hands of Penn State and Northwestern. Tigers quarterback Tajh Boyd is a legitimate Heisman contender and at No. 3 in the country, Clemson has their eyes set on the National Championship. That means rolling up gaudy numbers and big scores against mediocre opponents like Syracuse. Take note that Clemson is 16-5 ATS over their last 21 conference games.

Analysis: We rode the Georgia Tech money train right up until last Thursday’s matchup with Virginia Tech, which was fortuitous because the Hokies completely shut down the Yellow Jacket offense in a 17-10 victory. Paul Johnson’s crew now heads to Miami to face an Al Golden football team that is cooking with gas. The Hurricanes already have a marquee victory against the Florida Gators under their belt (21-16 on September 7) and are outscoring the opposition by an average of 32.7 points per game in 2013. In addition, Miami is 18-6 ATS over their last 24 games overall and 7-0 ATS over their last seven games following an against the spread win. Just for good measure we might as well mention that Georgia Tech is 0-4 ATS in their last four road games at Miami. Al Golden turned the Temple Owls around and now appears to be doing the exact same thing in South Florida all over again. Keep an eye on this football team if you haven’t been already. They can play.

Analysis: We cashed with Central Florida last week but are fading the Knights this Saturday for a variety of reasons, one of which has to do with last weekend’s loss to South Carolina. UCF took a 10-0 lead into the half against Steve Spurrier and the Gamecocks before sustaining a beating over the final 30 minutes to the tune of a 28-15 second half score that included one garbage Central Florida touchdown. In addition, UCF goes on the bye next week before a marquee matchup with Louisville, so it’s possible the Knights will overlook a Memphis team that has covered the number in six of their last seven games. The Tigers are better than people realize (5-1 ATS at home over last six) and it’s worth noting that Central Florida is just 3-5 ATS over their last eight games as road favorites. 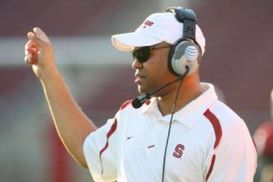 David Shaw and the Cardinal are out for revenge this Saturday.