Forget about New Orleans-New England because this Sunday is all about history, as the undefeated Denver Broncos opened as a Las Vegas record high 28-point favorite for their afternoon showdown with the winless Jacksonville Jaguars. Are you more comfortable laying the points knowing Peyton Manning and the starters could be headed for an early exit, or taking the four touchdowns with Chad Henne and a team that is averaging a league-worst 10.2 points per game?

That matchup and more in this week’s market report.

CLICK HERE to check out all of the current Week 6 lines.

Analysis: One of the biggest non-injury line moves we’ve witnessed this season occurs due to a combination of factors ranging from New York’s surprising 30-28 upset win at Atlanta to Pittsburgh’s dreadful 0-4 start. Still, it’s intriguing to see a five-point swing with the Jets entering Sunday on a short week while the Steelers are coming off a much-needed bye. That goes to show exactly how bad the early bettors believe this Pittsburgh team is playing, which is backed up by the fact that the Steelers have yet to cover a spread this season and are just 2-8-1 ATS over their last 11 games after amassing more than 350 total yards during their previous contest. 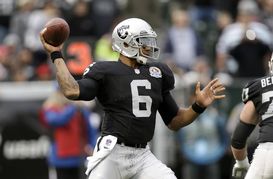 The early money is backing Terrelle Pryor and the Raiders.

Analysis: The Chiefs have been rock solid so far in 2013, but the early money clearly felt that laying 10.5 points was far too great a number for a squad that is averaging 25.6 points per game. In addition, the underdog in this series is 11-1 ATS over the last 12 meetings while the Raiders are 7-0 ATS over their last seven trips to Kansas City. This is a divisional showdown that is sure to command the full attention of both teams, so there’s no need to consider the “look ahead factor” here.

Analysis: One lousy, one good, one lousy, one good, one lousy. That’s the story of the San Diego Chargers through five weeks, which might lead some to believe that the Bolts are primed to produce a quality performance Monday night against the red-hot Colts, winners of three straight and now 13-8 ATS (.619) during the regular season since Andrew Luck came to town. But it won’t be easy to overlook the fact that San Diego is currently -8 in the turnover department (t-28th in NFL), while Indianapolis is an impressive +6 (t-4th in NFL). Also worth noting is another trend pointing to the Colts, which indicates that the team is 12-5 ATS over their last 17 games overall.

Analysis: Another showdown in which the early money is fading a team coming off a bye, Washington and Dallas get together Sunday night in a series that has been extremely one-sided, with the ‘Skins posting a staggering 13-3 mark against the spread over their last 16 games against the Cowboys. Tony Romo and the Cowboys made the world stand up and take notice after last Sunday’s slugfest with the Denver Broncos, but you have to wonder how quickly Big D can recover from such a heartbreaker. The Cowboys are just 3-10 ATS over their last 13 NFC East games while Washington is 4-1 ATS over their last five road games.

Analysis: The biggest point spread if NFL history hit the board in Las Vegas this week as the top-ranked Denver Broncos opened as a ridiculous four-touchdown favorite over the FCS Jacksonville Jaguars. The early money took the four touchdown line, but you know damn well those guys are going to be sweating bullets watching Peyton Manning fly up and down the field during the first half on Sunday. And that’s a key point to remember, because just like in college football, Manning and the starters could be pulled in this one sometime during the fourth quarter if the game gets out of hand. We’re going to bet this game just to say we were a part of history, but it will be a $10 ticket designated for the office wall.

ICONAre Andy Dalton and the Bengals headed for another flat spot?

Analysis: The Bengals took out the Packers in Week 3, compelling the public to jump on the Cincy train for their Week 4 matchup at Cleveland, which Cincinnati promptly lost. That flat spot led the public to back New England for their Week 5 showdown at Cincinnati, which the Bengals came out and won. So the question here is whether or not we’re headed for another Cincinnati letdown when the team travels to lowly Buffalo, who just so happens to be 4-0 ATS over their last four home games. This is primarily a bet against Buffalo quarterback Thad Lewis, who has just one career NFL appearance and will be filling in this weekend for the injured E.J. Manuel.