At some point this season I’m going to find a way to put it all together. A hot start in college football was met with an icy commencement to the NFL season, but the situation has reversed itself over the last couple of weekends with the professional ranks treating us well and the collegiate level going up in smoke.

Let’s see if we can find a way to grind out at least three wins from the following five plays, shall we?

Analysis: Army has covered the number in each of its last four home games and currently ranks third in the nation in rushing (338.2 yds/gm), which doesn’t bode well for a Rice defense that ranks 58th in the country in run defense (146.6 yds/gm). The Owls opened the season with a three-game losing streak that featured an 86-27 scoring deficit to Notre Dame and Texas A&M, which was immediately followed by a 3-point home loss to Old Dominion. As for Rice’s two wins, well, those came against a traveling Hawaii team that is currently 1-4 and a Southern Mississippi squad that has notched just three victories over its last 30 contests. Rice is undisciplined, plays poor defense and is traveling north for an outdoor football game with a weather forecast currently calling for an 80 percent chance of rain. That situation favors the football team who can establish the running game. 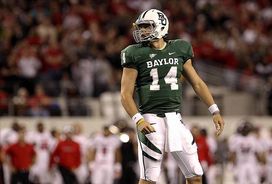 Bryce Petty and the Bears return home after a successful three-game road trip.

Analysis: We like the situation for Baylor here, who just wrapped up an undefeated three-game road trip and now returns home to challenge a TCU program that is coming off a monstrous 37-33 upset win over Oklahoma. The Horned Frogs are every bit as good as advertised, but knocking off the Sooners and then turning around for a road date at unbeaten Baylor is a tall order for any football team. Remember, the Bears are 22-4 ATS over their last 26 home games, 20-5-1 ATS over their last 26 contests overall and 10-2 ATS over their last 12 matchups against teams with a winning record. We’re going against the line move here, as Baylor opened as high as -11 but now sits at -8, per Sportsbook Review.com. But that’s just fine with us.

Notable trends: The home team is 4-1 ATS in the last five meetings between these two schools.

Analysis: Washington has had two weeks to get ready for this game while California is coming off a 60-59 come-from-behind victory over Washington State last Saturday night in which the Golden Bears surrendered a staggering 812 total yards of offense. Cal has now given up over 600 yards of offense in three straight contests and is permitting an average of 544.8 total yards of offense per game on the season. Yes, head coach Sonny Dykes has turned this program around since taking over in 2013, but don’t forget about the head coach on the other side of the field, as it’s certainly worth noting that Chris Petersen is 13-1 straight-up and 10-4 against the spread during the regular season when given an extra week to prepare. We like what Dykes has done during his time in Berkeley, but putting the Golden Bears in the role of favorite for this game may be a bit premature.

Notable trends: California is 3-13 ATS over its last 16 home games. 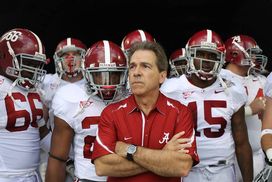 Analysis: So much for that Lane Kiffin offense, huh? The Crimson Tide and their highly-touted offensive coordinator hit the road for the first time last week and were upended by upstart Mississippi 23-17 in a game in which Alabama managed just one offensive touchdown. That now puts the Tide at 1-7-1 ATS over its last nine games overall and 1-4 ATS over its last five road contests. Additionally, take note that Bama is just 3-12 ATS over its last 15 games following a loss. Arkansas enters this showdown with an extra week of rest that was no doubt used to reinforce the fact that Nick Saban’s crew absolutely demolished the Razorbacks last season by a score of 52-0.

Analysis: Florida has scored a grand total of just 31 points over its last two games while LSU is coming off a blowout loss at Mississippi State in which the Tigers managed only seven points behind new quarterback Brandon Harris. Take note that the UNDER is 6-2 in the last eight meetings between these two schools in Gainesville and 13-5 over the last 18 showdowns overall. Also worth noting is the fact that the last five meetings between these two programs has resulted in a scoring average of just 34.6 points per contest.