Joseph Randle, RB, Dallas Cowboys (at Philadelphia, owned in 9% of Yahoo! leagues): Starting running back DeMarco Murray was lost in Week 6 to a sprained left MCL that could keep the former Oklahoma standout out of action for the next 2-4 weeks. And while Lance Dunbar resides at No. 2 on the Dallas depth chart, he’s been battling injuries of his own (hamstring), which opened the door for Randle to carry the ball 11 times for 17 yards and a touchdown Sunday against the Redskins. Don’t expect 20+ touches for the rookie from LSU this week against the Eagles, but do expect Randle to handle a sizeable portion of the workload.

Percy Harvin, WR, Seattle Seahawks (at Arizona, owned in 44% of Yahoo! leagues): The wide receiver won’t play Thursday night at Arizona, but could—and this is a bit of a long shot—return to action in Week 8 when Seattle travels to St. Louis to play the Rams. If you’re in need of wide receiver help, this is the time you should be thinking about acquiring and stashing Harvin for when he makes his eventual return to the starting lineup.

Nick Foles, QB, Philadelphia Eagles (vs. Dallas, owned in 15% of Yahoo! leagues): The Tampa Bay defense was surrendering an average of just 17.5 points per game prior to a showdown with Foles and the Eagles last Sunday, who torched the unit for a season-high 31 points and 351 total yards of offense. Through less than two games of legitimate action, the second-year quarterback has thrown for 493 yards and five touchdowns with zero interceptions. When Michael Vick finally gets healthy, he may come to learn that he no longer owns the starting job.

Carolina Panthers, D/ST (vs. St. Louis, owned in 31% of Yahoo! leagues): Held the Minnesota Vikings to just 10 points and 290 total yards (season low) in Week 6 and now return home to play a St. Louis team that currently ranks 30th in the NFL in total offense (295.7 yds/gm). The Panthers are set to go on a hot streak, which is why we recommend not only acquiring this defense, but backing Cam Newton and co. in Week 7 at -5.5. We jumped on that line as soon as it hit the board. 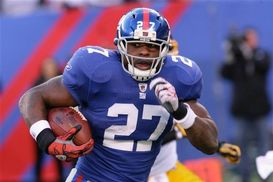 ICONJacobs ran like an antelope in Week 6 against the Bears.

Brandon Jacobs, RB, New York Giants (vs. Minnesota, owned in 26% of Yahoo! leagues): With David Wilson and Andre Brown banged up and Da’Rel Scott producing very little, Jacobs got the call in Week 6 at Chicago and busted loose with 22 carries for 106 yards and two scores in a loss to the Bears. Now that Big Blue is finally getting some legitimate production out of the running back position, don’t expect head coach Tom Coughlin to make a change anytime soon.

Keenan Allen, WR, San Diego Chargers (at Jacksonville, owned in 37% of Yahoo! leagues): The rookie from Cal is on fire over the last two weeks with 15 receptions for 222 yards and two scores on a healthy 21 targets. The door is open for Allen to emerge as one of Philip Rivers’ go-to receivers and the 21-year-old is taking full advantage of that opportunity.

Terrance Williams, WR, Dallas Cowboys (at Philadelphia, owned in 43% of Yahoo! leagues): The rookie third-rounder out of Baylor continues to impress, having found the end zone in each of his last two games to complement a three-week stat line of 13-249-2. Miles Austin better watch out because with the way Williams and Romo have gotten on the same page so quickly, Austin may wind up watching more action from the sidelines than he would like.

Jarrett Boykin, WR, Green Bay Packers (vs. Cleveland, owned in 2% of Yahoo! leagues): Has caught just one pass on the season, but that came for a gain of 43 yards in Week 6 against the Ravens. More importantly, Boykin was targeted six times last Sunday after stud wideout Randall Cobb went down with a fractured right fibula that will sideline the receiver for the next six to eight weeks. Boykin has a big opportunity in front of him and with Aaron Rodgers under center, the upside here is well worth the investment for owners in leagues with 12 or more teams.

Zac Stacy, RB, St. Louis Rams (at Carolina, owned in 39% of Yahoo! leagues): Stacy has carried the ball 32 times over the Rams’ last two games, so it’s fair to assume that he’s in control of the starting job for the foreseeable future. The problem is that St. Louis can’t run the ball worth a damn (71.8 yds/gm, 28th in NFL), so Stacy should only be considered a depth move for owners in leagues with 12 or more teams.

T.J. Yates, QB, Houston Texans (at Kansas City, owned in 1% of Yahoo! leagues): Recommended only for owners in need of serious QB help playing in leagues with more than 12 teams that can start two quarterbacks, Yates could be under center this Sunday at Kansas City after starting signal-caller Matt Schaub injured his leg in Week 6 against the Rams. Yates completed 12 of 17 passes for 98 yards in relief, but was intercepted twice. Exercise caution here, but take note that if the third-year quarterback can protect the rock and move the sticks, he may wind up stealing the job from Schaub, who has played horribly this season.

Brandon LaFell, WR, Carolina Panthers (vs. St. Louis, owned in 12% of Yahoo! leagues): If consistency is what you desire, you’re better off looking elsewhere. But for those owners in need of some WR depth to navigate the bye weeks, LaFell is a decent option. The Carolina wideout has found the end zone three times over his last three games and just posted a season-high 107 receiving yards Sunday at Minnesota. The downside here is that LaFell is averaging just 4.8 targets per game in 2013.

Kyle Rudolph, TE, Minnesota Vikings (at NY Giants, owned in 58% of Yahoo! leagues): Busted loose in Week 6 to the tune of nine receptions for 97 yards and a score after getting off to a really slow start to the 2013 campaign. The quarterback situation in Minnesota is a bit murky at the moment, but the eventual move to former Buccaneer Josh Freeman should result in positive statistical gains for Rudolph.

Josh Freeman, QB, Minnesota Vikings (at NY Giants, owned in 10% of Yahoo! leagues): Amazing. Even though Freeman has been terrible this season and, as a result, was dumped by the Buccaneers, he’s still owned in just 10% of Yahoo! fantasy leagues. For owners who play in leagues with more than 12 teams, this guy is worth a flier as a QB2. A new home could make all the difference in the world for a struggling signal-caller like Freeman.

Kris Durham, WR, Detroit Lions (vs. Cincinnati, owned in 1% of Yahoo! leagues): Could the Lions have finall y found a legitimate WR2 to play opposite Calvin Johnson? It’s too early to tell, but Durham posted a stat line last Sunday worth examining that consisted of eight receptions for 83 yards on 13 targets. We expect those target numbers to drop once Megatron returns to full health, but Durham could be worth a flier for WR depth for owners in leagues with more than 12 teams.

Khiry Robinson, RB, New Orleans Saints (Bye, owned in 1% of Yahoo! leagues): The New Orleans running game has been a nightmare for fantasy owners over the last few years (currently 23rd in the NFL at 86.7 yds/gm), but Robinson is worth monitoring after rushing for 53 yards and a score on just seven carries in Week 6 at New England. The upside here is limited, but there will eventually come a time when the Saints find a solid RB1 who handles a relatively heavy workload.