No need to celebrate over last week’s 4-2 effort. My season still looks something like this: 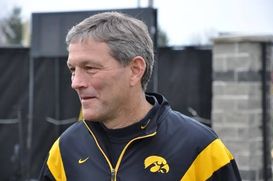 Analysis: This Big Ten matchup makes the Week 8 list for one, simple reason: Penn State-Iowa marks the return of the annual alumni bet between myself and Matt Bowen. This time around, Bowen is putting up pizza from Lou Malnati’s in Chicago against a $25 spin on the roulette wheel, courtesy of yours truly. And let me state for the record that I hate being on the PSU side for this one. The Lions are 3-9 against the Hawkeyes since 1996, with Kinnick Stadium serving as a house of horrors for the boys in Blue and White, who are 0-4 at Iowa since 2001. With the exception of Iowa’s 1-7 ATS mark over their last eight games following a straight-up win, there’s not a whole lot for me to get excited about here.

Pick: Iowa (-3), meaning the Hawkeyes will win by two, effectively making me a loser on both bets.

Analysis: A sixth win would make Duke bowl eligible for the first time since 1994, but my rationale for backing the Blue Devils on Saturday has more to do with UNC’s struggles on the road. In three away games this year (1-2 SU, 0-3 ATS), the Tar Heels have committed five turnovers, 29 penalties and boast a time of possession average of just 26:07 per contest. And with their loss to Virginia Tech last Saturday, Duke realizes that if they can’t get the job done this weekend, the upcoming schedule (at FSU, vs. Clemson, at Georgia Tech, vs. Miami) could very well send the Blue Devils on a six-game slide that keeps them out of a bowl game for the 18th consecutive year.

Take note: North Carolina is 0-4 ATS in their last four road games while Duke is 7-0 ATS over their last seven home games.

Analysis: Navy’s first four games of the season featured three losses. And in those three defeats, the Midshipmen committed 10 turnovers and averaged just 154.6 rushing yards per game. But something’s brewing in Annapolis. Navy has now won three of their last four games and in those three victories, the Midshipmen have turned the ball over just twice and are averaging an impressive 308.6 rushing yards per game. We’re going to ride the hot hand here.

Take note: Indiana is 2-6 ATS in their last eight non-conference games while Navy is 11-5 ATS over their last 16 games following a straight-up win.

Analysis: Boston College has dropped four straight, most recently losing 51-7 at Florida State, and the prevailing thought is that head coach Frank Spaziani is on his way out the door. The Eagles are a team in turmoil and could be very close to throwing in the towel on the 2012 campaign, if they haven’t already. Georgia Tech has their own problems, but the Yellow Jackets are 13-6-1 ATS over their last 20 games against teams with a losing record. The gamble here is that Boston College doesn’t bother showing up. 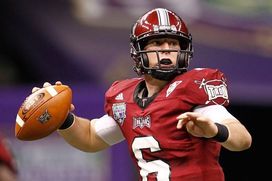 If Troy quarterback Corey Robinson is able to play, expect to see this line start moving in a hurry.

Analysis: FIU has dropped five in a row, losing by an average of 13.2 points per game. The upside for the Golden Panthers is that the underdog in this series in 4-1 ATS over the last five meetings, but keep in mind that Troy is coming into this game on extra rest, having lost to Western Kentucky last Thursday night. But here’s the real key to this game: Troy starting quarterback Corey Robinson suffered a concussion in last week’s matchup and his status for Saturday is uncertain at the moment. If it’s announced that Robinson will play, this line is going to skyrocket. So we’ll roll the dice by grabbing the early number. Backup Deon Anthony has appeared in six games this season, so it’s not as if he’s unfamiliar with the offense.

Analysis: Central Michigan currently ranks 116th in the country in scoring defense (39.2 pts/gm) and has dropped three straight contests, losing by an average of 21.5 points per game. Ball State is equally pathetic on defense (35.4 pts/gm, 107th in NCAA), but the Cardinals are 10-3 ATS over their last 13 games overall and head to Central Michigan on Saturday to play a Chippewas team that is 0-6 ATS over their last six home games.