Analysis: This is a far distance to travel on short rest for a Buccaneers team that is just 1-4 ATS over their last five games against teams with a winning record. In addition, the Vikings have been terrific at home in 2012 where they are 4-0 straight-up and 2-1-1 ATS, are surrendering an average of just 14.25 points per game with eight forced turnovers and 14 sacks. Expect the crowd noise to play a big factor in this primetime showdown and take note that the home team is 9-2-1 ATS in the last 12 meetings between these two organizations.

Analysis: This number hit the board at -8.5 midway through the Patriots’ Week 7 win over the Jets, but was bet down in a hurry through the key number of 7. Public perception of the Patriots is still high, but this football team isn’t nearly as good as most are giving them credit for. New England is 1-4 ATS over their last five games following a straight-up win while the Rams are 4-0 ATS over their last four contests against teams with a winning record. And even though the trend broke last week, home dogs are still 22-15 ATS this season (59.46%). 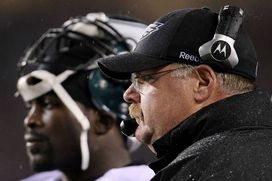 Will Andy Reid move to 14-0 off the bye with a win over Atlanta on Sunday?

Analysis: The defensive coordinator has been fired, the quarterback can’t stop turning the ball over and everybody from the general manager to the head coach currently find themselves on the hot seat. Yet, despite the fact that they are hosting a 6-0 Falcons team, the early money is coming in on the Eagles. Why, you ask? Maybe it has something to do with the fact that Philadelphia is 13-0 straight-up and 10-3 ATS coming off the bye under head coach Andy Reid. Yes, we realize that Atlanta is coming off the bye as well, but keep in mind that the Eagles are 9-3-1 ATS over their last 13 games against the Falcons.

Analysis: That’s a big move off the key number of 3, but not all that surprising when you realize that Miami is 24-9-1 ATS over their last 34 road games and 8-2 ATS over their last ten contests against AFC opposition. In addition, the road team is 8-3-1 ATS in the last 12 meetings between these two organizations. Miami is coming off the bye while the Jets are coming off a heartbreaking loss to division-rival New England. This should be a tight, defensive struggle, as evidenced by a posted total of just 40.5.

Analysis: I’ll admit, I’m a bit surprised this line moved towards Pittsburgh, especially when you consider the fact that Washington is 3-1 ATS on the road with Robert Griffin III under center. In addition, the Steelers are 1-5 ATS over their last six contests against teams with a losing record and 8-20 ATS in their last 28 games following a straight-up win. Pittsburgh covered the number against Cincinnati on Sunday night, but prior to that was just 1-4 ATS on the season. Gotta say I like the dog in this one.

Analysis: The only surprise here is that the books opened Dallas as the favorite against a Giants team that is 4-1 ATS in their last five trips to Big D. Big Blue is 2-0-1 ATS on the road in 2012 and 37-15-1 ATS over their last 53 road contests, while the Cowboys are 0-5 ATS in their last five home games. Home dog trends be damned. The Giants lost to this team back in Week 1 and would love nothing more than to send Dallas to 3-4 on the year while solidifying their spot atop the NFC East.