Did you know that through six games, the Baylor Bears have outscored the opposition during the first half 257-44 for an average margin of victory amounting to 35.5 points per 30 minutes? Did you also know that the Kansas Jayhawks have been outscored by their opponents—who include South Dakota, Rice and Louisiana Tech—during the first half of their six games by a total of 75-57?

Do you see where we’re going here? 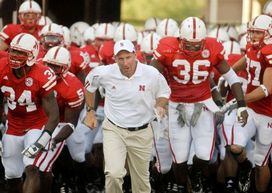 Bo Pelini's Cornhuskers have been on fire since falling to UCLA.

Analysis: Since their September 14 meltdown against UCLA that resulted in a 41-21 loss, Nebraska has been on cruise control, winning and covering in three straight contests with an average margin of victory of 32.0 points per game. Further favoring our position is the fact that the Cornhuskers have had an extra week to get ready for a Minnesota team that has dropped two of their last three, but is primed for a letdown following last Saturday’s 20-17 upset of Northwestern, who was in an awful spot. Despite the Gophers’ 5-2 record, the team has been outgained by 336 yards through just seven games this season. Lastly, take note that Minnesota is just 1-5 ATS over their last six games following an ATS win.

Analysis: This is a tricky spot for Houston, who travels to the east coast for an early start time coming off a heartbreaking loss (47-46 vs. BYU) to play a rested Rutgers team. Got all that? Good. Now let’s focus on the positive, which is the fact that the Cougars are 6-0 ATS this season and 8-0 ATS over their last eight games dating back to 2012. Houston is +14 in turnover differential this season and is 10-4 ATS over their last 14 games after scoring 40 or more points in the previous contest. The spot favors the Scarlet Knights, who have already played in two shootouts this season, but we’re more inclined to take the points with this much-improved Houston team.

Analysis: Bowling Green missed out on the MAC Championship game last season because their 6-2 conference record fell short of Kent State’s perfect 8-0 mark. One of those two conference losses came in the form of a 27-15 defeat at Toledo, so we’ve got a revenge game on our hands here. In addition, Bowling Green is currently tied with Buffalo at 3-0 in the MAC East, so the Falcons know they cannot afford a slip if they want to keep their dreams of facing either Northern Illinois or Ball State in this year’s title game alive. Take note that Bowling Green has covered the number in 12 of their last 16 games and is 7-3 ATS over their last ten home contests, while Toledo is 0-7 ATS over their last seven games following a bye week.

Analysis: Temple halted a six-game losing streak with a 33-14 home win over 3-5 Army last Saturday, so it won’t surprise anybody if the Owls come out flat in this one. SMU is just 2-4 on the season, but the Mustangs’ losses have come against quality opposition in Texas Tech, Texas A&M, TCU and Rutgers. The Owls are 0-3 on the road this season, losing by an average of 12.0 points per game while scoring an average of just 16.6 points per game. That won’t cut it against an SMU team that is averaging 35.3 points per home contest this year. Take note that the Mustangs are coming off a 34-29 upset win at Memphis and go on the bye next week, so there should be plenty of motivation to win this one before heading on vacation. 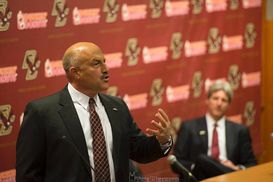 Addazio has already won more games in six outings at Boston College (3) than the Eagles did in all of 2012 (2).

Analysis: Outside of a 40-20 home win over 3-4 Middle Tennessee back on September 7, the Tar Heels have been lousy this season, which is a statement that can be punctuated by a 55-31 home loss to East Carolina. Scoring an average of just 23.5 points per game this season, North Carolina shouldn’t be favored by ten points over anybody, which is exactly why the early bettors steamed Boston College and dropped the line to UNC -7.5. Boston College, on the other hand, is in the midst of an impressive turnaround. The Eagles went just 2-10 last season, but new head coach Steve Addazio has this team at 3-3 on the year, with their three defeats coming at USC (35-7), at home to Florida State (48-34) and on the road at Clemson (24-14). Throw in an extra week of prep for a Boston College team that is 4-1 ATS over their last five games and you’ve got a nice underdog bet that’s also worthy of a small moneyline play.

Analysis: Something’s wrong in Wyoming, where a 3-1 start was quickly followed by a 42-21 loss at Texas State, a 38-31 home win over a suspect 2-5 New Mexico team and a 52-22 home drubbing at the hands of Colorado State last Saturday. Now the Cowboys have to turn it around and hit the road once again, this time for a trip to San Jose for a showdown with a Spartans team that has covered the number in 21 of their last 27 games overall. Take note that San Jose State already defeated common opponent Colorado State 34-27, is coming off a bye week and is 23-9 ATS over their last 32 games following a straight-up win.