What to watch for this weekend…

1. Will the Oregon Ducks cover the 35-point spread against the Jake Locker-less Washington Huskies this weekend (the line opened at -27.5)? Magic 8-ball says, “you bet your ass.”

2. Charlie Whitehurst gets his first NFL start Sunday in Seattle against the New York Giants. The line jumped from New York -5.5 to New York -7 after Seattle announced that Matt Hasselbeck wouldn’t play due to a concussion.

3. The NFP (6-2) fantasy squad takes on RotoWorld (5-3) in a critical Expert’s League showdown with playoff implications on the line.

4. Check out Dan Shanoff’s recap of the 2010 Blogger’s Fantasy League Week 8 matchups that currently features a 6-2 NFP squad at the top of the rankings. (Our squad name is “Fresh 2 Death”). Things are starting to heat up in there as well.

5. Carve out some time on Saturday afternoon to check out the latest installment of the Bump & Run Podcast featuring Bowen’s analysis and my loser picks for Week 9.

And last but certainly not least, your motivational moment of the day…

Eli Manning, QB, New York Giants: Manning is coming off a red-hot month of October in which he went 4-0, completed 65.7% of his passes, threw for 243.8 passing yards per game and posted a QB rating of 93.2. He’s tossed nine touchdown passes over his last three games and heads to Seattle this weekend to take on a Seahawks defense that is giving up an average of 18.3 fantasy points per game to opposing quarterbacks (13th most in NFL) and ranks 29th in the NFL in pass defense (267.7 yds/gm). In addition, the Giants enter Sunday’s game coming off their bye week, so the extra rest should help negate the issues that come with traveling across the country.

ICONIt doesn't get any easier than a game against the Buffalo Bills.

Matt Forte, RB, Chicago Bears: Forte’s a hit or miss running back prospect that has failed to top 50 rushing yards in six of his seven games this year. But if there was ever a week to feel comfortable with this guy in your starting lineup, Week 9 is it. The Bears travel to Toronto this weekend to take on a Buffalo Bills run defense that ranks dead last in the league (188.7 yds/gm) and is giving up an average of 25.9 fantasy points per week to opposing running backs (worst in NFL). Forte’s ability to contribute in the passing game (303 receiving yards, third among RBs) is an added bonus for owners who should expect to see big things from the Chicago running back this weekend.

Mike Williams, WR, Tampa Bay Buccaneers: A rookie of the year candidate that more people should be talking about, Williams currently ranks 19th in scoring among fantasy wide receivers and has topped 8.0 fantasy points in three of his last four outings. The former Syracuse wideout is facing another favorable matchup this Sunday when the Buccaneers travel to Atlanta for a divisional showdown with a Falcons defense that is giving up 27.2 fantasy points per week to opposing wide receivers (fourth most in NFL) and ranks 27th in the NFL in passing defense (260.3 yds/gm). Tampa’s offense is starting to turn it on as quarterback Josh Freeman has topped 200 passing yards in each of his last four games after failing to eclipse 185 yards in any of his first three contests.

Peyton Hillis, RB, Cleveland Browns: Hillis has been a very reliable fantasy option this season as the former Denver Bronco is averaging 13.1 fantasy points per game and has found the end zone in five of Cleveland’s seven contests. With rookie quarterback Colt McCoy making his third consecutive start this Sunday against the Patriots, look for head coach Eric Mangini to rely heavily on the running game in an effort to keep Tom Brady off the field. That philosophy could lead to big points as New England is giving up an average of 19.7 fantasy points per game to opposing running backs this year (11th worst in NFL).

Maclin owners should be all smiles with D-Jax and Vick back in the lineup.

Jeremy Maclin, WR, Philadelphia Eagles: Philadelphia fans may be ecstatic that quarterback Michael Vick and wide receiver DeSean Jackson are set to return to the starting lineup this weekend, but I can assure you that nobody is happier than second-year wideout Jeremy Maclin. With Vick running the show in Weeks 2 and 3, the former Missouri standout caught seven passes for 109 yards and three touchdowns on 13 targets. The Colts may only be surrendering 20.0 fantasy points per week to opposing wide receivers (14th fewest in NFL), but remember that the Birds are throwing the ball 59.5% of the time in 2010 (13th in NFL). DeSean Jackson’s speed will open up the rest of the field for Maclin to make plays on Sunday.

Jacob Tamme, TE, Indianapolis Colts: Why not ride the hot hand until it comes back to bite you? Tamme stepped in beautifully for the injured Dallas Clark last Monday night by hauling in six receptions for 64 yards and a touchdown against the Houston Texans. What’s even more comforting is that quarterback Peyton Manning targeted his inexperienced tight end nine times on 45 passing attempts (20%). Look for more of the same in Philadelphia on Sunday when Tamme goes head to head with an Eagles defense that is giving up an average of 8.4 fantasy points per game to opposing tight ends this season (seventh most in NFL).

Minnesota Vikings, D/ST: Yes, the Vikings are 2-5, but don’t let a disastrous year in Minnesota distract you from the fact that this is one of the best D/ST matchups on the board for Week 9. Minnesota plays host to an Arizona Cardinals team this Sunday that is giving up an average of 15.4 fantasy points per week to opposing D/STs (most in NFL). In addition, Leslie Frazier’s defense plays much better in the dome then they do on the road:

Ryan Fitzpatrick, QB, Buffalo Bills: I know what you’re thinking. Why would I sit a guy that is averaging 23.2 fantasy points per game and ranks 14th in scoring among fantasy quarterbacks despite having only played in five games this year? That’s a good question and is one that can be answered when breaking down Buffalo’s Week 9 opponent. Lovie Smith’s defense is surrendering just 12.8 fantasy points per week to opposing quarterbacks (1st in NFL) and has only giv en up four passing touchdowns in seven games this season (1st in NFL). Fitzpatrick may have thrown 12 touchdown passes in his last five games, but Julius Peppers and company are coming off the bye and will be bringing the heat all afternoon up in Toronto. Make the switch. 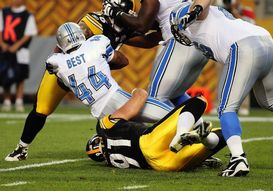 ICONBest has been losing carries and faces a lethal Jets run defense this weekend.

Jahvid Best, RB, Detroit Lions: Lets start with the bad: Best has carried the ball 12 of fewer times in three of his last four games, hasn’t scored a touchdown since Week 2 and is watching former starter Kevin Smith cut into his workload (12 carries in Week 8 vs. Washington). Now, the worse: The New York Jets are giving up just 8.8 fantasy points per week to opposing running backs (fewest in NFL) and rank fourth in the NFL in run defense this season (88.7 yds/gm). In addition, Rex Ryan’s bunch ranks second in the league in scoring defense (15.7 pts/gm). None of what you just read looks good for a guy that hasn’t posted 100 total yards in a game since Week 2.

Dwayne Bowe, WR, Kansas City Chiefs: Bowe has been on fire the last few weeks as the veteran wideout has found the end zone five times in his last three games. So why would we advise you to sit him? For starters, the Raiders are surrendering just 16.3 fantasy points per week to opposing wide receivers (fourth fewest in NFL) and currently rank fifth in the league in pass defense (183.0 yds/gm). In addition, the former LSU Tiger has struggled during his career to produce against the Raiders. In six career games vs. Oakland, Bowe has scored only one touchdown and is averaging just 68.5 receiving yards per game. In addition, be advised that quarterback Matt Cassel currently ranks 23rd in the league in passing attempts (179). This game has all the makings of an AFC West ground and pound street fight.

Cedric Benson, RB, Cincinnati Bengals: It’s been a tough year for the 27-year old Benson. He’s only topped 100 rushing yards in a game one time this season (vs. Tampa Bay), hasn’t scored a touchdown since the end of September (at Carolina) and is averaging a paltry 3.8 yards per carry. Things are about to get a lot worse this Monday night when Benson and the Bengals host a Pittsburgh Steelers defense that is surrendering only 10.1 fantasy points per week to opposing running backs (second in NFL) and ranks first in the league in rushing defense (58.9 yds/gm). Keep in mind that in the four games he’s played against the Steelers since joining the Bengals in 2008, Benson has scored only one touchdown and is averaging just 46.3 rushing yards per game. As if that wasn’t enough, be advised that the Steelers have allowed only four rushing touchdowns in their last 14 Monday night games. 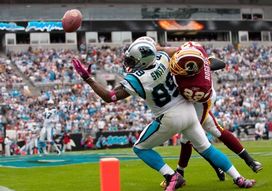 ICONExpect the Saints secondary to key on Smith this Sunday.

Steve Smith, WR, Carolina Panthers: Smith has been held out of the end zone in each of his last four games, but fantasy owners may be tempted to start the Pro Bowl wideout this Sunday after watching him haul in nine passes for 85 yards on 15 targets in Week 8. We’re here to advise you against that type of thinking. The New Orleans Saints have given up fewer fantasy points to opposing wide receivers than any other team in the NFL this season (10.0 pts/gm). In addition, New Orleans ranks third in the league in pass defense (178.6 yds/gm) and has surrendered just six passing touchdowns on the year (second in NFL). Leave Smith on the bench this weekend.

Brent Celek, TE, Philadelphia Eagles: In the two games that Eagles quarterback Michael Vick started (and finished) this season, Celek caught just seven passes for 69 yards and zero touchdowns on 11 targets. Vick makes his return to the starting lineup this Sunday, but what’s even more alarming is that Philadelphia’s opponent—the Indianapolis Colts—is giving up only 3.4 fantasy points per week to opposing tight ends (fewest in NFL). There’s not much upside here to get excited about.

Baltimore Ravens, D/ST: A date with the sometimes inconsistent Chad Henne may look like a favorable matchup, but owners are advised to leave the Ravens D/ST on the bench this Sunday when Baltimore plays host to a Miami Dolphins team that is giving up only 7.1 fantasy points per week to opposing D/STs (seventh fewest in NFL). In addition, Ray Lewis and company rank 24th in the NFL in both sacks (12) and interceptions (5). There are better options out there.

The P&G Blogger Fantasy League (BFL) is a group of 12 online sports folks competing on the NFL.com fantasy platform for the chance to win a donation for a local charity, furnished by P&G. The NFL Entities have not offered or sponsored the sweepstakes in anyway.