Welcome back: Cromartie signs with the Jets 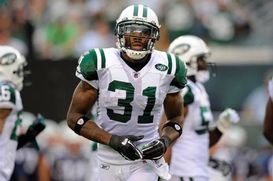 ICONDespite some interest from the Raiders, Cromartie is back in New York with the Jets.

Manish Mehta of the New York Daily News is reporting that the New York Jets have reached an agreement with free agent cornerback Antonio Cromartie on a four-year deal worth $32 million.

After falling short in the Nnamdi Asomugha sweepstakes and watching other free agent cornerbacks like Johnathan Joseph and Richard Marshall sign elsewhere, the Jets pulled the trigger on Cromartie, giving the team an experienced veteran and familiar face to play opposite Pro Bowl lockdown specialist Darrelle Revis.

The 27-year-old Cromartie spent the first four seasons of his career in San Diego before landing in New York with the Jets. He recorded three interceptions in 15 starts last season.