What happens after 300 carries, revisited

The day and age of the workhorse running back is coming to a close in the National Football League. The NFL’s current era is one of aerial firepower that places a premium on the quarterback, wide receiver and cornerback positions. Look no further than professional football’s annual lottery for proof, as each of the last two years has seen the first round of the draft come and go without a single running back selected.

The devaluation of the running back position is also readily apparent in the steady decline of 300+ carry players from season to season. In 2003, the NFL saw 13 running backs amass 300 or more rushing attempts. In 2009, that number dipped to six. In 2013, only Philadelphia’s LeSean McCoy and Seattle’s Marshawn Lynch topped the 300-carry benchmark.

Last summer we took a look at what happens to running backs in the season following a 300+ carry campaign and applied the data to the five ball-carriers who entered 2013 one year after a 300+ carry effort. From a fantasy football perspective, all five running backs (Arian Foster, Adrian Peterson, Doug Martin, Marshawn Lynch and Alfred Morris) who fit the bill saw a decrease in fantasy output last season, with four of those players (Foster, Peterson, Martin and Morris) experiencing a drop of at least 50 fantasy points from 2012 to 2013.

Since 2002, there have been 82 instances in which an NFL running back recorded 300 or more carries in a season. For the purposes of this analysis, we’re going to eliminate two of those players (Ricky Williams and Tiki Barber) because they retired following their 300+ carry season. Of the 80 remaining players, 60 (75 percent) came back the year after recording 300+ carries to produce fewer fantasy points. In addition, 44 (55 percent) of those 80 running backs saw a decrease in fantasy production of at least 50 points from one season to the next.

If you CLICK HERE and scroll to the bottom, you’ll see a detailed breakdown of each 300+ carry running back from 2002-2012. Here’s the rundown for the five players who entered 2013 coming off a 300+ carry season:

As most of you will probably remember, there were a variety of reasons why each of these five players failed to maintain the same level of fantasy production from 2012 to 2013. Martin and Foster were sidelined with injuries, Morris played on an offense that fell apart at the seams and Peterson set the bar so damn high in 2012 that it was virtually impossible to produce a repeat effort in 2013. Lynch was the one back who found a way to produce at a similar rate, but the Seattle workhorse still recorded 11 fewer fantasy points.

For those of you who have already begun preparing for the 2014 fantasy season, you’ll want to take note that LeSean McCoy (314 carries) and Marshawn Lynch (301 carries) will fall within this trend this year. Should we expect either or both players to experience a regression in fantasy points this season? Well, that depends on a variety of factors.

The first item of business we need to establish is what constitutes a regression, as it would be inaccurate to weight Priest Holmes’ 2-point regression from 2002 to 2003 the same as Chris Johnson’s 116-point regression from 2009 to 2010. For this study we’re going to define a true regression as a drop-off of 50 or more fantasy points from one year to the next. 50 fantasy points is the approximate equivalent of 500 rushing yards, eight touchdowns or a combination of the two (ex: 250 rushing yards and four touchdowns). 50 points also signifies the difference between a fifth-place fantasy finish and an 11th-place fantasy finish in 2012 (difference of fifth place and 17th place in 2011, fifth place and 15th place in 2010).

Once again eliminating Ricky Williams and Tiki Barber, we have a total of 80 running backs who amassed 300 or more carries in a season sometime between 2002 and 2012. 60 of those running backs (75.0%) experienced a regression in fantasy points the following season, with 44 (55.0%) of those players suffering a drop-off of at least 50 fantasy points. What those statistics also tell us is that only 20 running backs in our case study (26.6%) came back the following season to post even bigger numbers than the year before.

Take another look at that last paragraph. More than half of the running backs who carried the ball 300 or more times in a season from 2002-2012 returned the following year to record at least 50 fewer fantasy points. That’s a big percentage and an even bigger drop in production and it also means that at least one of our two running back candidates entering 2014 will, on average, fall victim to the same trend.

How did it happen?

Ruptured Achilles tendons, blown-out knees, broken feet and bad backs. Nobody said it would be easy to sustain 300+ violent collisions over the course of a brutal 16-game season and then come back the following year to do it at a high level all over again. 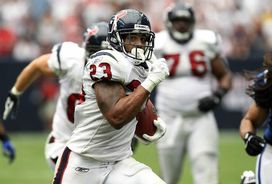 To nobody’s surprise, injuries are the No. 1 reason why so many 300+ carry running backs fail to sustain consistent production from one year to the next. Of the 60 running backs who experienced a decrease in fantasy scoring following their 300+ carry season, 38 (63.3%) played in fewer games the following year, with 21 (35.0%) missing three or more contests.

This information tells us two things. First, 22 running backs who carried the ball 300+ times from 2002-2012 came back the next season to play in the same amount or more games than the year before and still suffered a regression of 50 or more fantasy points. Second, this information indicates that, on average, we can expect at least one of the two aforementioned running backs entering the 2014 season to miss at least some time due to either an injury, suspension or some other reason (40 of the 80 running backs in this study appeared in fewer games the year after carrying the ball 300+ times).

AGE/WEAR & TEAR ON THE BODY

Father Time eventually catches up with all of us, but he appears to have a fondness for NFL running backs, who have arguably the shortest shelf life of any position in all of professional sports.

As for the 20 running backs who scored more fantasy points in the year after their 300+ carry campaign, the average age entering the next season for those players checks in at 26.6 years of age, with nine of those 20 ball-carriers beginning the season at 26 years of age or younger.

The candidates: McCoy turned 26 in July, Lynch turned 28 in April.

The ultimate team sport, football requires 11 members of the same unit to work in unison in order to move the rock down the field. LeBron James can drop 50 points simply by taking a large percentage of his offense’s shots, while Miguel Cabrera needs exactly zero assistance from his teammates in order to go yard. But the same cannot be said about NFL running backs, who are dependent upon both blocking and an offense that can successfully throw the football in order to open up running lanes underneath. Three straight incompletions and you’re headed for the sidelines.

While there’s simply not enough space here to detail all of the transactions that have had an effect on the 60 running backs who suffered a drop in production following their 300+ carry season, here are a few noteworthy examples:

1. Four of the five players who changed teams following their 300+ carry season suffered a regression of at least 50 fantasy points the following year. Thomas Jones (2009-2010) signed with Kansas City where he had to compete for touches with Pro Bowler Jamaal Charles. Edgerrin James was 30-years-old when he departed Arizona for Seattle in 2008 and had to deal with the transition from Peyton Manning to Matt Leinart when he signed with Arizona in 2006. Eddie George was 31-years-old, worn down and competing with Julius Jones when he landed in Dallas in 2004. That leaves us with Jamal Lewis, who experienced an uptick in production when he left Baltimore for Cleveland in 2007. Take note that 2007 was the only time in the last ten years that the Browns posted a winning record during the regular season.

3. In 2006, Frank Gore ran for a career-high 1,695 yards en route to the greatest fantasy output (250 points) of his eight NFL campaigns. But 2006 was the only season in which Gore averaged over 19 rushing attempts per game (19.5). San Francisco opted to scale back the workload for the Miami product and Gore went on to average 18 carries or more per game just one time (2010) over the next six seasons.

Personnel, team and scheme changes are just a few of the additional reasons why NFL running backs have had trouble sustaining a high level of production following a 300+ carry season. Fortunately, our two candidates who fit the mold entering 2014 won’t have to deal with as many adjustments.

Despite the data, McCoy remains our top fantasy prospect entering 2014.

LeSean McCoy, Philadelphia Eagles: Ranked second in fantasy production in standard scoring formats last year following career-highs in attempts (314) and rushing yards (1,607). Now has 1,149 carries under his belt, turned 26-years-old in July and could lose some touches to free agent signee Darren Sproles. However, McCoy is still young and he’s playing in an up-tempo offense that will only get better in its sophomore season. Currently our top-ranked fantasy prospect for 2014.

Marshawn Lynch, Seattle Seahawks: Between his punishing running style, age (28) and 1,753 career rushing attempts, Lynch looks like an excellent candidate to experience a fantasy regression in 2014. And don’t forget about the fact that Seattle is coming off a Super Bowl victory, which sometimes leads to complacency within a locker room. Lynch has carried the ball 616 times over the last two seasons (second in NFL) and saw his yards per carry average drop from 5.0 in 2012 to just 4.2 in 2013. Still a top-10 back in our opinion, but we’d likely target Lynch more towards the later part of the first round.