Who are they after?

The Falcons were 503 seconds from a spot in February’s Super Bowl before a Frank Gore touchdown decimated Atlanta’s championship dreams and sent the organization dejectedly into the offseason. To get so close only to come up empty had to sting, but in the aftermath of Atlanta’s NFC Championship game defeat, the franchise no doubt looked to the bright side.

The Falcons were getting closer to the ultimate prize. Perhaps the addition of one or two more players would be enough to put the team over the hump for good.

Perhaps that player will join the franchise next Thursday.

Sports Illustrated’s Peter King reported on Wednesday that the Atlanta Falcons—who currently own the 30th overall selection in the 2013 NFL draft—are looking to trade up in next Thursday’s first round. King goes on to state that he’s not sure which player the team is after, but suggests Notre Dame tight end Tyler Eifert or a defensive tackle makes some sense for the club. 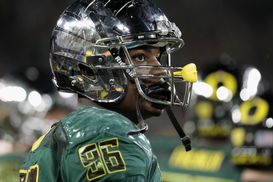 Could Oregon pass rusher Dion Jordan be the player Atlanta is after?

It’s possible that the Falcons could be thinking big, just like they were in 2011 when the organization sent two first-round picks, a second-round selection and two fourth-round picks to the Cleveland Browns in exchange for the sixth overall pick, which resulted in the acquisition of Alabama wide receiver Julio Jones. Few would criticize that move two years later, as Jones ranked 11th in the league in receiving yards (1,198) and seventh in touchdown receptions (10) last season for the NFL’s seventh-ranked scoring offense.

The presence of Matt Ryan, Roddy White, Julio Jones and Steven Jackson means we can rule out the quarterback, wide receiver and running back positions. King’s suggestion of Tyler Eifert makes sense, as the Falcons could trot out an “Ace” personnel package that would have Eifert and future Hall of Famer Tony Gonzalez on the field at the same time with Jones, White and Jackson.

And while you can never have enough talent along the offensive line, we believe that if the Falcons are looking to move up a significant number of slots by next Thursday, the likely target within the crosshairs plays somewhere along the defensive line. The Falcons ranked 28th in the league in sacks last season (29) and replaced mainstay defensive end John Abraham with former New York Giant Osi Umenyiora in free agency. It was a solid move, but Umenyiora turns 32-years-old in November and has seen his sack totals drop off in each of the last two seasons.

Most NFL teams would be more than willing to trade down for the right price. Now the Falcons need to figure out if the player they are after can be had for a reasonable cost.