Will Rich Eisen run a 6.165 at the Combine? There's a prop bet for that

You’ve got to hand it to the staff over at BetOnline.com because there’s definitely no shortage of creativity in their prop bets department. 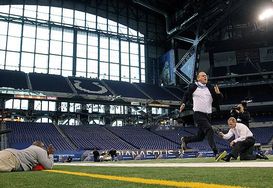 Can Eisen crack 6.15 at this year's Combine?

Just a few weeks after the offshore sportsbook posted a prop on how many times CNBC’s Darren Rovell would tweet during the Super Bowl, BetOnline was at it again in anticipation of the upcoming NFL Combine.

This time the target is NFL Network host Rich Eisen.

Eisen has run the 40-yard dash in a full suit at each of the last seven NFL Combines and is expected to do so again this year. As a result, BetOnline will be releasing an over/under of 6.165 seconds for the former SportsCenter anchor.

For those of you looking to get down, here’s how Eisen has performed since he started the popular bit back in 2005:

Think he can turn in a personal best and cash a winning ticket for all the under bettors out there?